Are blacks scared straight by the law or by hell-raisin' whites?

By the way, when speaking about Massachusetts, it's important to keep in mind that a major reason it doesn't have many blacks and that its blacks aren't as big of a problem as elsewhere is because it has an abundance of violent, tribalist, anti-black Irish to keep the blacks down. Boston is the only place I've seen in the U.S. where blacks appeared to be afraid of white civilians walking down the street. Having a lot of scary Irish around makes theorizing at Harvard a lot more pleasant.

In contrast, poor Milwaukee, a nice German social-democratic town (as Alice Cooper points out in Wayne's World, Socialist candidates were elected mayor of Milwaukee three times in the 1920s), had high welfare and a direct rail line from the Mississippi Delta, and it just got the worst of Southern blacks.

Why not go for a national comparison? Here's a map of the black imprisonment rate (per 100K black population), from an old article also by Steve. Purple means higher imprisonment rates, yellow means lower. 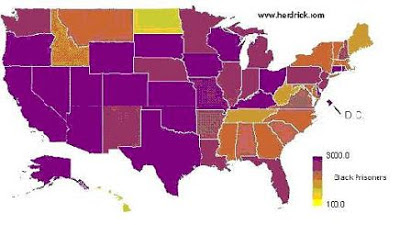 The data are from 1997, when most of them would have been incarcerated during the rising-crime period of the '60s through the early '90s. So they're more likely to represent thuggish criminals, compared to today when more of them would be drug possessors and less of them serial rapists, robbers, killers, and subway graffiti vandals.

Steve suggests that the lowest rates found in Hawaii and North Dakota likely reflect blacks who got there by being in the military, which filters by intelligence and discipline. It's hard to think how else the average black got out there in Hawaii, or up there in North Dakota.

Aside from that, there are three regions where blacks appear to be kept more in line -- 1) the Deep South plus the lower Appalachians, especially Tennessee and West Virginia; 2) the northern part of the Mountain West; and 3) the parts of the Northeast that have more rural areas, especially Maine.

In contrast, blacks get locked up like crazy in the West Coast, the Southwest, the Plains states, the Midwest, and the Bos-Wash Corridor along the East Coast (New York City's 1997 rate must have reflected Giuliani's crackdown, and resembled nearby Connecticut, RI, and New Jersey).

Instead, what pops out at me is that the areas with low black imprisonment rates have high concentrations of whites whose ancestry is Celtic. Here are four Census maps showing the prevalence of Scotch-Irish, Scottish, Irish, and "American" ancestry. The last one is clearly a Celtic one, only coming from those who are ignorant of exactly where their ancestors came from, are more patriotic, or are just too cantankerous to give the nice Census lady anything but a smartass answer to get her off their front porch and back to where ye came from.

Compared to other white Americans, those of Celtic ancestry are more clannish and warlike, more honor-driven and less law-regarding. The hell with being tattle-tales to law enforcement -- how about we just settle this little thing ourselves, like men. Picking up that vibe from whites at the grassroots level must make black criminals think twice about stepping on the wrong man's dick -- if he doesn't pursue you to within an inch of his own life just to bring about your death, then his kinfolk may just round up a party and track you down like an animal, unencumbered in whatever they do by legal regulations since the authorities won't know about it.

Of course it doesn't require a real-life rude awakening -- you can just size up whether some pale-skin is a weenie whitie or a crazy cracka. And you're not sizing up only those who you're thinking of victimizing right now -- you're unconsciously taking stock of all sorts of white people you run into or hear about locally, and filing away what characteristics they seem to have, for future reference.

At any rate, if a state's white population is made up mostly of Culture of Law groups, then at the grassroots level whites appear wimpy in the eyes of blacks. Should they be victimized, they won't make waves, but rather call on the law enforcement system to administer justice. Black criminals in those states must sense that most of the local white targets are wimps, strengthening their resolve and making them more careless. It'd be like taking candy from a baby. But eventually the law does catch up to them, and these states see higher rates of black imprisonment.

So, why bother involving the law so much in daily life? They're always stretched too thin, they lack the collective knowledge that community members would have if they put their heads together, their powers are hamstrung by legal regulations, and being outside mercenaries, their motives are not always in the locals' best interests -- corruption and careerist showboating are particularly likely at the highest levels. Not to mention the financial cost of convicting criminals, then maintaining such a sprawling prison population through their term.

Just by contributing in your own small personal way to the perception by criminals that the locals in your community are not the type you want to fuck with, your collective yet uncoordinated efforts can have a similar effect to the police and the courts. And when two methods are about equally effective, bottom-up keeps us more human than top-down.

Also, I doubt that most of those low black imprisonment rates in Celtic regions is due to whites forming kangaroo courts and lynch mobs after a crime has already been committed -- you'd hear about that at least some of the time. Rather the difference in white attitude seems to serve more as a deterrent -- like, I better check myself around here, these white folks be CRAZY.

Finally, it needs repeating that the map doesn't show a liberal vs. conservative effect. It's more based on the ethnic composition of whites, and the ways of life that adapted them to their differing homelands over the centuries and millennia back in Europe.

English Puritans and Socialist Scandinavians may provide a greater sense of stability and structure, but they may wind up relying too much on authority, while neglecting their involvement in everyday self-policing. And in an ethnically mixed-up country like ours, that approach doesn't seem to be intimidating enough to black criminals. It's better suited to shaming would-be criminals of Norwegian etc. ancestry before they even try it.

But blacks look at the law enforcement system as just a bunch of overpaid punks -- whatchu pigs gon' do, huh? I'll sue for police brutality! That's when you need more rambunctious whites to curb bad black behavior at the grassroots level. Sometimes it takes barbarians to deter a savage.

* At least those from the agrarian parts of Germany toward the north and east; the mountainous and more pastoralist southern states are more conservative, hence probably more of the fighting mountain man type. We could check by contrasting German Lutheran Americans vs. German Catholic Americans, since religion more or less maps onto the agrarian vs. agro-pastoralist split back in their homeland.
Categories: Crime, Geography, Human Biodiversity, Politics, Violence