When the world gets you down, you need a little comic relief. The comedy genre helps you cope and move on not only by allowing you to re-frame stressful situations in a more lighthearted way, but also by causing you to bust a gut laughing, triggering your brain to release pain-killing endorphins.

So we might expect to see an increasing demand for comedy movies during rising-crime times, and a decreasing demand in falling-crime times. The graph below shows how many of the box office top 10 movies released in a year had "comedy" listed in the Genre field of their IMDb page. I eliminated those that also had "animation" listed because that's just unfunny kiddie crap, not comedies that would help adolescents and adults cope with stress. I did let Who Framed Roger Rabbit squeeze through, though, since it's mostly live action and is more like the old bawdy and violent Looney Tunes cartoons that were aimed at teenagers and grown-ups. 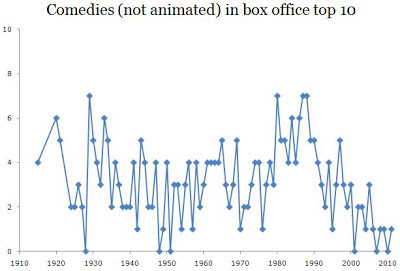 During the rising-crime period of the early 20th C., comedies were fairly popular, other than a dry spell in the late '20s. After a peak in the early '30s, they fall through a bottom in the early-mid '50s. Once again the Great Depression is invisible in the cultural record. The early '30s look like the rest of the Jazz Age, and the increasingly prosperous period of the mid-'40s through the '50s look like they were just continuing the trend begun in the mid-'30s and into the early '40s. What does separate these two periods is the peak in the homicide rate in 1933, before which it was rising and after which it was falling.

The murder rate began rising again in 1959, and there were smaller signs that it was around the corner even by 1957 or so, with the somewhat wilder and more delinquent youth culture of the late '50s compared to the earlier stretch of that decade. This sense of growing disorder put audiences in more of a mood for comedy, bringing about a re-birth of the genre that continued through the '60s.

After a brief sputtering out in the early '70s, comedies began climbing again, remaining popular all throughout the '80s, reaching a peak they had not seen since the tail-end of the Jazz Age in the early '30s. Whether they made it into the top 10 or not, just about all of the funniest movies ever made come from the late '70s and the '80s -- Vacation, Beverly Hills Cop, Ghostbusters, Planes, Trains and Automobiles, Heathers, Back to the Future, Weird Science... just to name a few. It's also striking how many were not just knee-slappers but also got your adrenaline pumping (the long defunct action-comedy), or juxtaposed a heavier and lighter approach to the subject matter (the "dramedy").

Starting in the '90s, comedies have virtually disappeared from popularity. Counting the inoffensive kiddie cartoons would only nudge the numbers up a bit in the past 10-15 years, and the genre would still show a sharp decline over the past 20. The comedies that we do get tend to be more one-dimensional yuk-yuk movies, and most of them, like Superbad, don't even excel at this limited goal.

In a falling-crime period, people feel so much safer and more stable that they go into a more vegetative mode, compared to the earlier rising-crime period. Procrastination pays off more when the deadline is felt to be farther into the future. With so little excitement in their lives, they don't feel like they need cheering up -- at least not to the level of laughing until it hurts.

Kids these days seem to whine more frequently about being stressed, but the magnitude of it must be pretty low, since they're not killing themselves at higher rates than before, or lashing out. A steady, low-intensity stream of stress does not call for occasional yet cathartic releases, but instead for a steady stream of low-dosage pain-killers -- bland reassurances from friends that they're stressed out too, the fleeting rush they get from leveling up a video game character or accreting likes on their Facebook status update, low-key spacey music, and other not-very-arousing addictions.

Watching a great comedy movie is fundamentally a joyful experience, so it offers little appeal to a population of joyless treadmill joggers.
Categories: Movies, Pop culture