Terror Management Theory is a literature in psychology that studies what happens when you prime people with thoughts about death. Many of the results are variations on the theme of seeking symbolic immortality, for example wanting more to belong to a group that existed before you joined and that will continue living on once you are dead.

This helps to alleviate the anxiety triggered by thinking about your own mortality -- some piece of you, some impression you made, or some influence that you left behind, will still make its presence felt to other living people even after you're gone. So, it's not like your connections to others will be totally severed.

One way that many peoples across the world have for dealing with death is the belief in an afterlife. The General Social Survey asks whether you believe in "life after death," and that ought to respond to a rising crime rate, which causes you to reflect more on mortality.

As it turns out, those who are getting closer to death's door show a somewhat high level of belief that doesn't change over time. So I restricted respondents to those aged 18 to 59. Here's how likely they were over the years to believe in an afterlife: 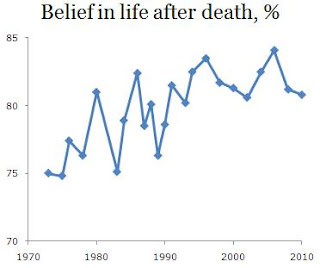 There is a jagged rise to a peak in 1996, followed by an overall decline -- unlike the earlier period, where only single-year declines occur as part of year-to-year random variation, there's now a 3-year and then a 2-year period of decline. That's interrupted, though, by a brief reversal during the mid-2000s.

This seems to lag behind the crime rate, then, which peaked in 1992, 4 years before the peak in afterlife beliefs. What could have happened 4 years before the unexpected peak in 2006? That was 9/11, which began to sink into our minds sometime during 2002. Other than that, there has not been any spectacular event during falling-crime times that has made us think about what lies beyond.

I'm not sure why there's such a lag. Perhaps it's because the belief has to do with something far off into the future, so you don't get around to revising that belief as early as you do other beliefs that are more relevant to your decision-making right now. Dating-and-mating behavior changes with little or no lag, for instance. But really nothing solid comes to mind.

The only other variable that shows a pronounced lag is illegal substance use, which peaks somewhere between 5 and 10 years after the crime rate peaks. That was true not only for the recent crime wave, where drug use peaked in the late '90s, but also for the earlier Jazz Age crime wave, where opiate use peaked around the late '30s or early '40s.