No end in sight to mowed lawns

Last year I showed the disappearance of bush among Playboy centerfolds that began sometime around 1990. But that way of measuring the trend can only go so low -- once it hits 0 out of 12 women in a year, as it has over the past decade, how can we tell whether or not it's becoming even more popular?

Going to Google Trends, here's the pattern over time for searching for "brazilian wax" and "bikini wax" (U.S. results only): 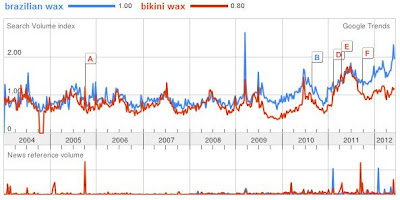 There was a pretty steady search volume up through 2009. But it's been rising even higher still since then. I have trouble imagining that lots more women are getting it done than before, since it had been adopted by just about all of them under a certain age. So either those over that certain age have given in as well, or the same amount of women are searching google more intensely. Like, before they would've searched a few times before summer, and now they're even more neurotic about it and on average search twice that number.

Whatever the reason, this bizarre grassroots movement shows no signs of abetting. I know it's not the biggest problem facing the society or anything, but it's yet another in a series that makes you wonder what planet you've landed on. It's like if all women under 40 were walking around with their lips painted to look razor-thin instead of full.

The female body is already so hairless that it risks looking pre-pubescently innocent without a little animalistic reminder of her maturity. Especially if her other secondary sex characteristics don't leap out at you. Nothing wrong with not having T&A, but that girl more than any other can't afford to remove the one clear sign of maturity that everyone gets.
Categories: Dudes and dudettes