Are wimpy Millennials behind the rise in military suicides?

My realtalk buddy and I were trying to make heads or tails of the fact that suicides in the military now outnumber combat deaths. He was in Vietnam and said that, while soldiers always love to bitch about their assignments, there was nothing like the wave of suicides that there's been recently. And the people he's talking about faced far tougher stress in Vietnam than today's military has faced in Iraq and Afghanistan. (I'm still waiting for him to say, "The man in the black pajamas, Dude. Worthy fuckin' adversary.")

It looks like the government began collecting data in 1980. Here's the number per year: 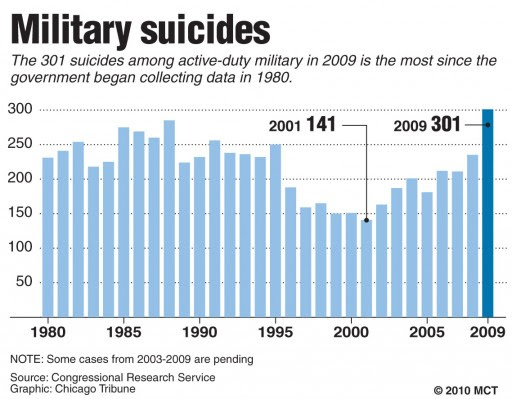 A report shows that the military suicide rates paralleled the civilian suicide rates during the 1980s, '90s, and earlier half of the 2000s, then began surging sometime during the mid-2000s and up through 2008. They attributed a good deal of this to the deployment of troops to Iraq and Afghanistan.

However, more recent data show that suicides have continued to rise up through 2012. (They're comparing the Jan-May period for each year, to be able to include 2012, and say that the rate during this time-frame predicts what happens for the entire year.) Combat troops were withdrawn from Iraq in 2010, and the war in Afghanistan is winding down. So mere exposure to combat seems to be unlikely to explain much of the rise, which has only gotten worse even after steady de-escalation of the war effort.

What changed around 2006 and has continued through now? I think it's the generational structure. Most military suicides are males aged 18-24. But a 21 year-old Millennial is not the same as a 21 year-old Boomer or Gen X-er was. It looks like the suicide rate began climbing once Millennials started to make up a larger portion of the young adults in the military, right through today.

Having been sheltered by their helicopter parents all their lives, including being socially isolated from their peers, not to mention growing up during a falling-crime period, the Millennials never faced much of a test of survival and independence. They locked themselves indoors playing video games all day instead of gathering together in a group to play football in the park, or manhunt in the woods.

In the same way that regular stressors build stronger bones and muscles during development, regular rough-and-tumble play, even the occasional encounter with real violence, toughens a person mentally to handle the load as an adult. Violence doesn't even have to face you first-hand -- just seeing it happen to others via the news, word-of-mouth, and so on, reminds you that it could happen to you too. That alone can begin the process of building up mental defenses to such stressors later on.

It would hardly be surprising, then, that when the younger soldiers in the military are drawn from this generation, the rates of depression, anxiety, and suicide would begin soaring. Presumably they're tougher on average than a random group of Millennials, but still wimpier on average than their young military counterparts who were born before 1985.

That fits with the impression my younger brother gives me of what Army life is like in the 2010s. He entered basic training in his late 20s, and said the typical guy there was more interested in screwing off and complaining about minimal demands. Those guys were born in the early '90s, while he was born in 1982. He probably notices the pre-Millennial vs. Millennial differences more than I do, since he's even closer to their age, yet still on the not-too-fucked-up side of the generational divide. Just 5 years younger than him is a wide chasm.

I didn't hear too many stories like that from my other brother, also born in 1982, who went to Iraq once or twice during the mid-late 2000s, and has been out of the Army for several years now (I don't recall exactly when). Maybe the troop composition was only just getting screwed up when he got in, or maybe he just didn't feel like offering stories about them. I'll have to ask next time we're yakking on the phone.

Here we see another case of helicopter parents crippling or at least stunting their kids' healthy growth as "adults," in the name of (over-)protecting them as children.
Categories: Generations