Let's follow up with some harder data on the decline of our oral culture. I took the Oxford Dictionary of Modern Slang (2005) and checked each entry for rhyme, alliteration, or reduplication. An example of each: nitty-gritty, dirty dog, and mau-mau. These stylistic devices all put more sound repetition into our speech, so that we can remember them more easily. They also satisfy our taste for ornament, which is what we call those stylizations that enhance memorability.

Oral communication relies so heavily on memory, unlike texts that are off-loaded to a storage medium. So, the coining of slang words that have repetition is a good barometer of how thriving the oral culture is.

Turning to the data, I excluded overly technical jargon, military jargon, criminal underworld slang, and arcane drug references (although I kept slang about alcohol, cigarette, and general drug use). I also excluded words that were listed as only or primarily non-American English. Last, I kept only words coined from 1900 or later. The point is to look at popular American folk slang during a time when we can compare it to the homicide rate. The entries contain both still-current terms as well as those no longer in use but highly common in their day.

This left 115 terms, and below is a graph showing how they're distributed over time (according to the date in the entry). They're grouped into 5-year bins, plotted by the mid-year of the bin. Click to enlarge. 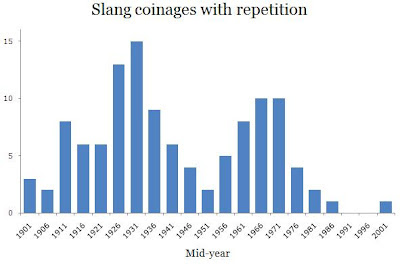 The most odd-looking thing is the lack of terms from the late '70s and after. I think this just reflects the minimal coverage that this period got overall in the dictionary -- I scanned every entry, and didn't notice a whole lot that was common in the '80s or '90s. The book came out in 2005, so most of the entries were probably chosen even earlier. If we were to correct each time-period's count of repetition slang by dividing by the total number of entries from that time in the book, I think you'd see the later '70s and '80s up near the level of the late '60s and early '70s. I think the creators were simply too cautious about committing to perhaps too-recent slang words.

So, comparing the falling-crime era of the past 20 years to what came before will have to wait for another data-set. For now we'll look at the rest of the pattern.

The coinages increase from around 1900 through the '29-'33 chunk. That perfectly reflects the trend in the homicide rate, which peaked in 1933. Then coinages plummet through the early-to-mid-'50s, again reflecting the falling homicide rate almost down to the year. Still, there is an apparent blip in coinages during the latter half of the '50s, whereas the homicide rate doesn't start rising until 1959. Since it's just a rise from 2 to 5 words, it may not be worth making a big deal out of. On the other hand, it may be part of the broader late '50s pattern of people starting to come out of their cocoons a little bit, like the spread of rock 'n' roll. As the crime rate rises after this, the coinages are clearly rising as well. I already explained why I think the picture of the later '70s and after is lacking.

Just about perfectly, then, the rise and fall and rise of the oral culture tracks the rise and fall and rise of the crime rate. There are two ways this happens. First, criminals prey on people who are out in the open, so a rising crime rate reflects a rising sociability in the non-criminal population, which obviously leads to greater face-to-face speech. Also, there's a response to the rising crime rate itself: we need to band together more, look out for each other more, and so on, when threats to our security are rising. And banding together boosts our face-to-face communication.

The most interesting part of the picture is the falling number of coinages during the mid-century, suggesting a declining sociability. We've seen that in all sorts of other places that I won't link to because it'll take too long, but that you can find by searching this blog for "mid-century". Because that period was a lot more stable, we tend to think of it as ideal in every way -- or at least in many other ways. Isn't that back in the good ol' days when people related to each other so often face-to-face and enjoyed a thriving oral culture? Evidently not.

There was a previous golden age of social life, but that was the earlier Jazz Age. For anyone familiar with basic aspects of social or cultural life in those two periods, it can't be surprising to see that the 1900s through the early '30s saw greater interest in creating slang meant to be enjoyed in up-close-and-personal interactions. The naive views that things always get better or always get worse are usually wrong. Social-cultural life seems to go more in cycles, although sometimes there are longer-term steady trends as well.

But in the interest of reminding ourselves that even a relatively more staid period can still have its occasional departures, consider that the first half of the '50s gave us the terms gang-bang, ball-buster, and party pooper (a term used by party animals). And the mid-late '30s gave us drop dead, juke joint, hanky-panky, and killer-diller. The '40s do look like more of a wasteland, though, aside from the coining of "culture vulture".

It's fascinating how familiar much of the Jazz Age slang is -- nitwit, heebie-jeebies, bring home the bacon, two-time, blah-blah, down the drain, fat cat, jeepers-creepers, dime-a-dozen, to not know shit from Shinola, worry-wart, and the construction X schmX, like grammar schmammar. Not to mention phrases that aren't included in the repetition group, such as "sex appeal". Their language just packs more of a punch than the mid-century. It's more memorable. Even the iconic novel of the era has an alliterative title -- The Great Gatsby.

I don't know about you, but digging into all this stuff really does give me hope that things will get better (before eventually getting worse again). The Gilded Age gave way to the Jazz Age, the Mid-century Modern Age gave way to the New Wave Age, and the SWPL Age must give way to whatever Age is waiting to welcome our next awakening.
Categories: Language, Pop culture