In my research over the past several weeks on the changes in visual style during rising vs. falling-crime periods, the two strongest things that jump out are the greater use of chiaroscuro and the restricted depth perspective of rising-crime visual culture. I'll flesh those out in a more in-depth post when I can gather enough pictures together, and toss out some ideas about why these cycles regularly happen, from the Renaissance through today. The basic effect is to endow rising-crime art with greater theatricality at the expense of more photorealistic displays.

At any rate, for now I thought I'd take a quick look at one of the exceptional cases, where rising-crime art shows an incredibly deep perspective -- not to lend greater illusionism to the image, but to evoke a kind of bottomless pit that the solitary or small arrangement of characters are hovering in. Thus, it looks anti-realistic in a way: the figures look like they're in between dimensions or worlds connected by an incredibly long corridor.

There are several examples of this exception, which I'll cover later. Now I'll just look at two that I could not have put my finger on before looking over so much of the visual culture of the past 600 years, but which seem to me strikingly similar now. And that is the movie Chinatown and the early paintings of Giorgio de Chirico.

First, though, a quick reminder of how perspective, and placement of figures at various lengths along that depth, was used to give a sense of harmony, of being immersed in a perhaps bustling yet still orderly world. Here's Raphael's School of Athens (1510) and Velazquez's Las Meninas (1656):

Moving to the rising-crime period of the early 20th C., de Chirico borrowed deep perspective portrayals of Renaissance plazas, but nearly emptied them of people (or other objects) and made the depth recede so sharply that it's unsettling. Here's Piazza d'Italia (1913), Mystery and Melancholy of a Street (1914), and The Disquieting Muses (1918).

There are too many shots in Chinatown with a similar composition of deep perspective and few, isolated figures; below are only those that were easy to find images of. Like de Chirico's paintings, they also tend to be shot around twilight, casting very long shadows. This heightens the uncanny effect of viewing a space that seems to span two different dimensions.

You really have to watch (or re-watch) the movie to see it. The pictures here don't always show the effect at its strongest, but they'll show you where to look in the movie. For instance, the first image below looks even better a few moments later in the scene, when the car is even further away. 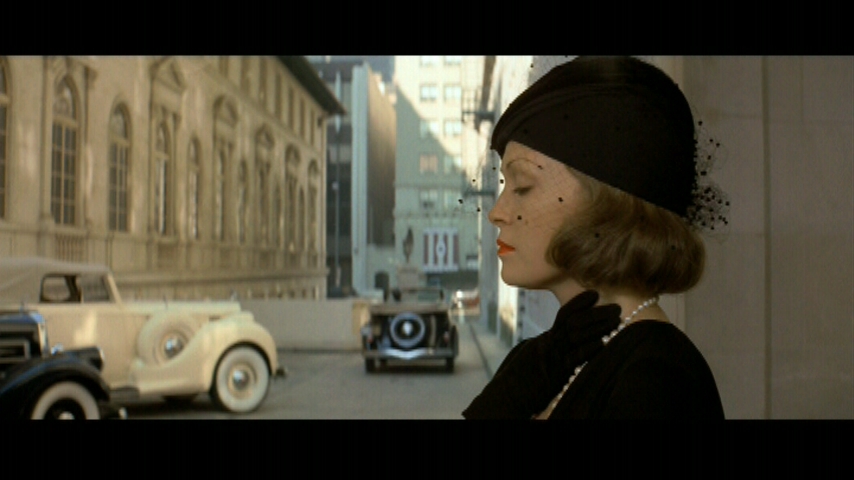 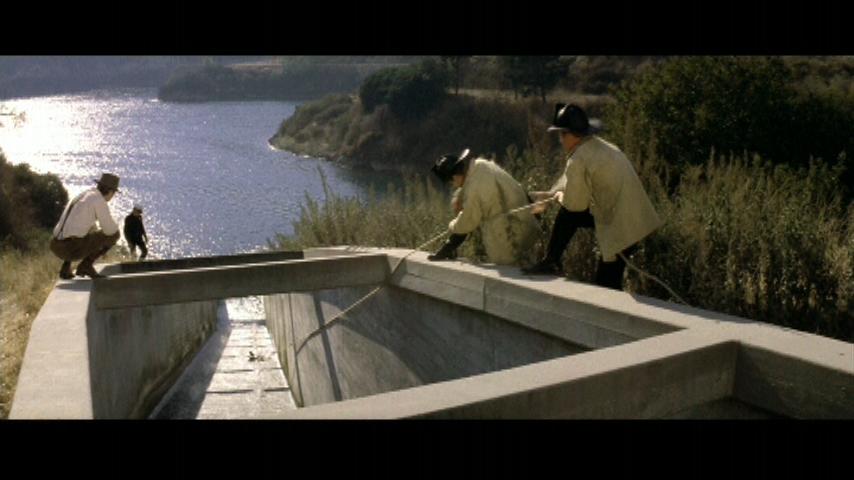 You get the idea. Other movies from the most recent rising-crime period, such as The Shining, use even more sharply receding depth shots with isolated figures to suggest that they inhabit a space between two distant but linked worlds. However, those are mostly claustrophobic interior shots, whereas Chinatown does so with agoraphobic exterior shots like de Chirico.

Again, the point is not that they look identical, that one directly quotes another, etc. Rather, just that they employ highly similar compositions for similar effects, and that their use of the technique was different or opposite of the way that falling-crime artists used it. Rising-crime artists used strong depth perspective to provoke an unsettling feeling, and to draw subtle attention to the stylized nature of the work, whereas the falling-crime artists used it to draw out a more harmonious feeling, and through sensory immersion to try to hide cues that it was a stylized work.
Categories: Art, Movies