Earlier I looked at the popularity of duets between people who normally aren't in a group together, and showed that they track the trend in the violence rate over the past 50-some years. This is just one of many examples of people coming together more often, and across wider social distances, as coping with the rising level of crime gives them more of a reason to have larger and tighter social networks.

Another way to see the fragmentation of groups is to look at popular songs with more than one name attached as performers, but that are not duets. That is, there's no interaction, addressing each other, and so on -- just a bunch of individuals doing their own isolated thing. Kind of like how in night clubs these days people don't dance with each other but only near each other. The mood they project is the same as well, namely "look how awesome I am" boasting.

Returning to the Billboard Year-end Hot 100 singles, I counted all songs that had more than one artist listed, and subtracted the number of duets already accounted for. Here is how this measure of group fragmentation has changed from 1959 to 2011: 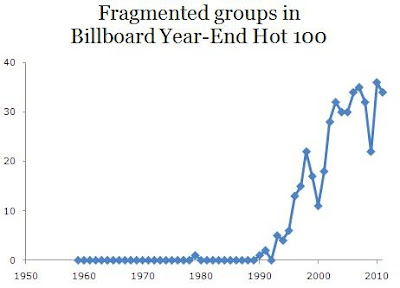 Once again we see a perfect fit with the trend in the crime rate: there are only 4 cases during all of rising-crime times, and the steady increase does not begin until 1993, so that in recent years they account for roughly one-third of the most popular singles in a year.

Just about all of these songs are rap and what passes for R&B; white-people music groups haven't splintered so badly. The lower in status a group is, the harder they get slammed by the falling-crime era dissolution of social bonds. Seems like another world, but I remember when black musicians were either solo artists with a backing band or part of a band or group, not free agents who have no team loyalty and only join up occasionally to add hype value to the song.

As late as the early '90s, most rappers and R&B singers were part of a group -- Boyz II Men, DJ Jazzy Jeff and the Fresh Prince, Naughty by Nature, Jodeci, Digital Underground, Onyx, Wreckx-n-Effect, etc. When Dr. Dre and Snoop Doggy Dogg's songs from The Chronic caught fire during '93, it was the beginning of the end of black music groups. That was also when the black gang problem began subsiding, showing again the general nature of this retreat from group-mindedness. Psh, fuck all y'all, I got ta do mah own thang...

Someone else (not me) could look at how many of the top 100 singles were made by solo artists over time.

I also wonder about the earlier 20th C. crime cycle. I don't have a very good feel for how team-oriented the jazz musicians were from ragtime through the early '30s (the rising-crime period). But I do get the impression from what little history I've read that it wasn't a bunch of free agents or solo acts with a background band. When big band and swing took over during the later '30s and '40s, it was more about the bandleader. The #1 weekly singles from the '40s and '50s that weren't big band do look like mostly solo acts. In the less popular directions that jazz went in (like bebop), it also looked like one star occasionally collaborating with another star, rather than forming a stable team.

White non-jazz musicians of the falling-crime mid-century don't seem to have been part of a cohesive group either, mostly solo singers and a backing band. It wasn't until rising-crime era rock music that groups with more equal-status members came back. Even early rock was by solo musicians like Elvis, Little Richard, Chuck Berry, and so on.