Deja vu is a misfiring of some brain process related to memory. But is it a sign of a healthy or worsening memory system? Athletes get more sprains than someone who plays video games all day, yet those occasional unusual states of their joints are a sign of their overall healthier and more active condition.

Back when paranormal phenomena were taken more seriously by average people, the General Social Survey asked five questions about how often the respondents had experienced them. One of them (called DEJAVU) asked how often you "Thought you were somewhere you had been before, but knew that it was impossible." (The other questions are SPIRITS, GRACE, ESP, and VISIONS.)

Here is how frequently people had deja vu across the lifespan, where red is never and the higher bars are more frequently: 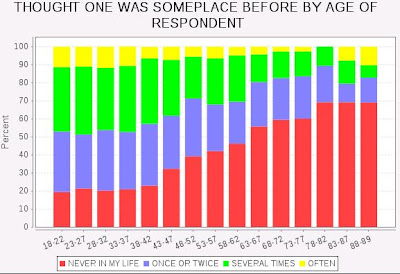 People experience deja vu less frequently as they age, although it doesn't really start to break down until their mid 40s, and it never recovers. So deja vu is a side effect of a better functioning memory system.

Perhaps a young and healthy brain so rapidly and efficiently codes all sorts of details into long-term memory that once in awhile it does so too fast, giving you the impression that you've already been someplace before. If most of the details are not coded in this too-fast way, just the occasional one or two, that would explain why you don't have a very rich sense of what the previous experience was like -- just a vague feeling that one or two details are familiar.

The age curve for deja vu didn't match with the other four questions above, which looked like some mix of age and time-period factors. Nothing simple like a steady rise over the lifespan. So deja vu is not really a paranormal phenomenon. People are more willing to accept that it happens (probably because most people, though apparently not everyone, has experienced it first-hand), and can think of plausible naturalistic explanations for it without much trouble.

The more typical paranormal experiences, such as seeing events at an impossible distance or being in touch with the dead, appear to result from an over-active empathy system. They feel connections that are not there, kind of like "phantom limb" patients who feel that a missing limb is still attached to their body. The predicted sex difference shows up in paranormal experiences, where females (more empathetic) have them more often. 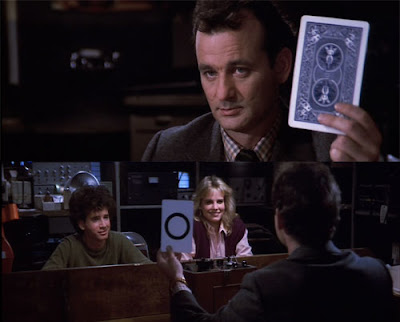