Two recent articles at CNN do a good job of distilling the kinds of anxieties and fears that most people have about today's new technologies. One looks at the wide variety of personal data that cell phones can collect and be accessed by who knows exactly, and the other at Facebook's privacy policy and its push to integrate everyone into its network.

The common theme is the invasion of privacy but more deeply the desire to be left unseen in solitude. You see this when people freak out when they learn that your computer broadcasts an IP address, among other examples. Since we live in an age of cocooning, I guess it's no surprise that that's people's main fear relating to new technologies -- that they will somehow allow others to get around or through the cocoon.

In rising-crime times, when people are more outgoing, they had the opposite fear -- that the increasingly popular gizmos might cut us off socially and emotionally from one another. Here, for example, is George Segal's encapsulation of this anxiety in the context of personal computers, right on the cover of Time magazine in 1983: 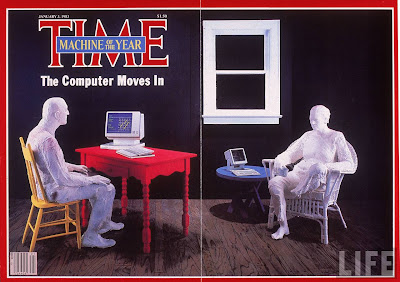 The nightmare of the early 1980s has become the utopia of recent decades, where by now even coffee houses -- supposedly places to hang out -- have been converted into joyless hive-like computer labs, each junkie seeking to wall themselves off from the others: 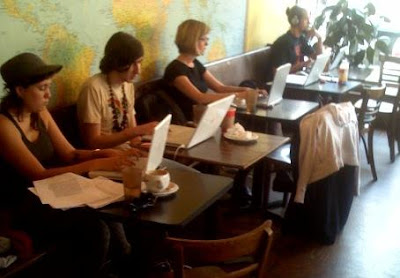 People who lived at least some of their formative years in more outgoing times are somewhat more immune to these changes. My worry about social network sites is not what personal data they're collecting about me -- BFD, it's not like I'm an undercover agent and they'll blow my cover. It's more about how they're evolving away from simulating back-and-forth conversations and toward individual broadcasts directed to and drawing responses from no one.

As for cell phones, Virginia Heffernan did a better job than I could of detailing how interactive and relationship-building it was to talk on the landline analog phone. It's rare to see anyone talking on their phone anymore -- unless they're driving. Increasingly it's just a more portable form of feeding their internet addiction. But even when used for communication, it's almost always texting.

Some things are fine to be taken care of by texting, things that don't have an emotional component and that don't require more-or-less undivided attention. Pointed, specific questions that are in no great rush to be answered. "Do we have any eggs left in the fridge?" "No, I think we're all out." "OK, I'll pick up a carton on the way home then." Or something similar at work, where email isn't a better option (like if they're more on-the-go).

But for most other contexts that we used to talk about over the phone, texting's shallow emotional depth and unpredictable delays between exchanges make it nearly impossible to really connect with another person that way. Remembering back to IM'ing, it wasn't so deep, but at least there were quick responses and an unbroken rhythm to the conversation. So it looks like the main defect of texting is just how interruptible the conversations are. And even during those interruptions, the person who has yet to respond usually does not have their mind on the conversation; they're off doing or thinking about something else.

These features prevent two people from lulling themselves into a dream-like state, where they're enjoying themselves so much that the flow of times goes by unnoticed. Instead it's like constantly trying to fall back asleep and return to a dream, only to keep getting woken up.

Our anxieties about technology always take the form of "such and such will leave us less human," but what that defining human quality is changes dramatically with the rises and falls in the crime rate, which shapes how outgoing or withdrawn we are. In outgoing rising-crime times, we fear that our sociability may be severed, while in cocooning falling-crime times, we fear that our solitude may be breached.