Girl names that can't be nicknamed

Met another Millennial chick at '80s night tonight with a name that has no clear nickname, Austin. "Aussie" makes her sound Australian, which she is not, and "Austie" doesn't exactly roll off the tongue. Then there was McCall... "Cally"? That sounds like the dog breed.

As much as I love ragging on Millennials, I haven't talked about their helicopter parents in awhile, and they're just as complicit, fully so in this case. In case you missed the original post, here's the punchline graph for how common girls' names have been that end in a long "ee" vowel, in blue, along with the homicide rate in red (they correlate at +0.5) 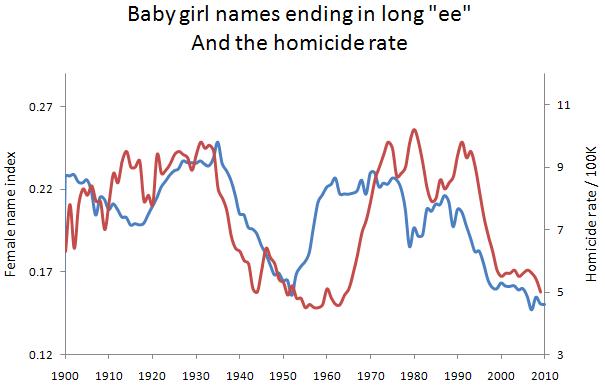 This suffix (the "diminuitive") suggests cutesiness and informality, so it might tell us how much the parents wanted their daughters to grow up in a buddy-buddy social environment, rather than one where everyone is formal to the point of not connecting.

It's almost as though the parents of Millennials don't want their kids to be able to get up close and personal with each other, or else they'd give them nicknameable names. This would be an unconscious choice of course. But it certainly fits with their child-rearing style of locking them indoors, only letting them out on scheduled and supervised "play dates" (the stupidest parenting idea I ever heard of).

Unless you've been around them a lot, you'd be surprised how hard it is to find a suitable nickname for most of them. It's not the biggest obstacle to getting close to someone, but when it happens with nearly every single one, it does get a little depressing.

Even after years of exposure, it still boggles my mind that the sweet "Becky" has lost out to the dull "Becca" as the nickname of Rebecca.