If ornaments serve to anchor the decorated thing in your memory, then perhaps one reason why video games have been so uninteresting and forgettable over the past 15-20 years is that they have dropped ornamentation from their overall look. No great loss, but it's still worth a quick look at since video games have become part of our visual culture. They're just another example of how bland things look -- naturalistic, bare-surfaced, and drained of color.

Even back in the good old days the typical video game wasn't very dazzling, but there was one that went as far toward an Art Deco look as they'll probably ever get, the best-selling Sonic the Hedgehog.

The basic ingredients are all there: a mixture of machine and organic forms, geometric stylization, exuberant colors, and icons borrowed from Native American and Near Eastern sources. Here is a fuller gallery showing the bonus stages where giant jewel-like fish and birds float in the background. And compare the palm trees with stylized rings around them and metallic leaves to those found in a pool house made during the 1980s Deco revival: 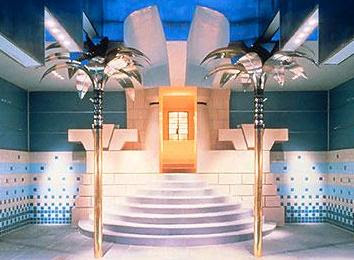 This game came out in 1991, right as the culture was about to make a huge U-turn. Already by the next year with Sonic 2, the geometric / machine-age stylization of the organic objects was basically gone, with tree leaves looking more tree-leafy. Here is a screenshot of Sonic 3 from 1994 showing the move toward naturalism (within the programming constraints of the time of course).

Sonic CD came out in 1993 and still had an ornamental look, but it had to be played on a system that hardly anyone owned (the Sega CD), so even by that time only a game that few people would play could have that sort of look. The screenshot below shows the return of geometrically stylized nature, complete with mountains in the background that look like terraced 1920s skyscrapers. Here is a gallery showing off the rest of the game's decoration-heavy visuals. 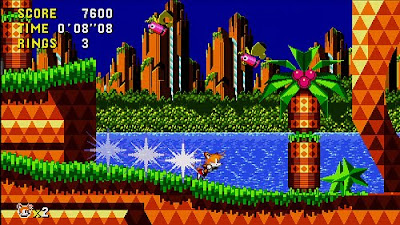 After that, you were lucky to find a game with eye-catching colors, let alone one that didn't attempt to look realistic. I've seen screenshots of the buildings in BioShock that are going for a Deco look, but that's more of a realistic portrayal of such a style, like snapping a picture of the Chrysler Building. It's not the incorporation of that style throughout the look of the game itself, i.e. the lines, volumes, and textures of all that you see.

It's puzzling that video game designers decided to go that way, given how pitiful the technology is at recreating life-like images. Bland-looking movies are understandable -- at least they can do naturalism very well. But why didn't video games stick with the stylization and colorfulness? I guess with the zeitgeist moving so strongly against that look, even poorly done naturalism has been more to the audience's liking than catchy ornamentation.