Portraits vs. non-figurative cover art for the Saturday Evening Post, 1900-1960

While browsing through the library stacks, I found a book with every cover of the Saturday Evening Post, one of the most iconic magazines from pre-Sixties America. Here is an online gallery going back to 1923.

The Post first put pictures on the cover in 1900, and they gradually went out of existence during the '60s, so we can get a good view of social and cultural change during an earlier cycle of violence rates. (They rose from 1900 through the 1933 peak, then fell through 1958.) They don't have any natural subject matter to show, unlike magazines about fashion, very important people, gardening, etc. All they wanted to show was Americana. The wider possible variation means it'll be more able to reflect any changes in the zeitgeist.

This look will show whether the same patterns during the recent cycle showed up back then as well, although only people interested in my rising-crime vs. falling-crime ideas will find that interesting. It's even more important because nobody knows anything about American life before 1960. Most views of the 1950s especially are just made up and passed on as folklore. You can get a better feel for those times from The Man in the Gray Flannel Suit, Edward Hopper paintings, and Mad Men. In none of those do you see, for example, a powerful patriarch who keeps his wife under his thumb, whether cool-headedly or tempermentally.

So far I've done four case studies to clarify what the zeitgeist was like during the mid-century, i.e. the falling-crime era of the mid-'30s through the '50s. Rather than review them here, just search this blog for "mid-century". In brief, the zeitgeist then was more cocooning, don't-make-waves, poker-faced, and visually drab and severe. That was a reversal of the rising-crime period just before the mid-century, from roughly 1900 through the early '30s. Back then people were more outgoing, heroic, neighborly, expressive, and ornamental. I've already looked at the reasons why those behaviors go with rising or falling-crime periods, and won't belabor them again here.

The Post covers will let us get more quantitative, an approach I took earlier when looking at Radio Shack catalog covers, which are more likely to show people during rising-crime times. To get at the socially approaching vs. socially avoidant, people vs. things, empathic vs. autistic split, I coded the covers at two extremes.

On the people-person side, I judged whether the cover showed a portrait or not. These are not just pictures of people, but ones where the face is central, and moreover where its expression isn't simply a reflex to conditions in the immediate environment. The person is letting their guard down enough to show some authentic part of themselves. So, someone laughing at a jester isn't in portrait mode -- presumably anybody would laugh at that jester, and the laugher is thus interchangeable with anyone else who could've been shown laughing, not unique. There cannot be any real narrative content, which would provide backstory or reasons why the person is making the expression they are. To be an invitation to get to know the real person better, the expressions has to be fairly context-free. I didn't mind if there were props (say, a woman holding a tennis racket), but they couldn't have narrative force.

On the socially avoidant side, I judged whether the cover focused on one of three types of non-human content -- animal-only, landscape, or tech / engineering / misc. artifacts. Several covers overlapped the landscape and engineering categories, so I lumped the two groups into a single non-figurative group. The pattern over time for all non-human covers or just those with non-figurative covers is the same since the landscapes and tech covers dwarf the animal-only covers. To make a stronger case about socially avoidant or autistic tendencies, I'll use the non-figurative covers, leaving out the animal-only ones.

Here's how the popularity of each cover type changed over time: 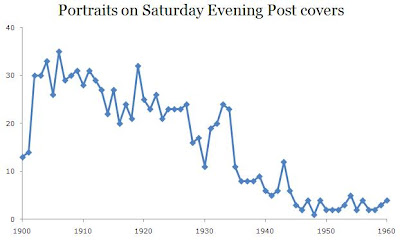 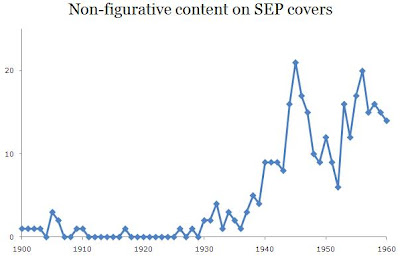 Right away we see portraits being very popular in rising-crime times, then falling off toward near disappearance by the end of falling-crime times. It looks like they overshot the emphasis on portraits in the 1900s, as they groped to find their niche. But they basically fluctuate between 20 and 25 covers per year. There is an unusual plunge during 1928-30 (so, too early to reflect the stock market crash), but it recovers for the next four years, right up through 1934, the first year of falling crime rates. It's not until 1935 that they start plummeting steadily.

With all those portraits, not to mention the other less personal pictures of people, it shouldn't be surprising that the early decades of the Post are mostly free of non-figurative covers. During the entire 61-year period, the number of portraits and number of non-figurative covers are strongly inversely correlated at -0.81, showing that this approach really is measuring an antagonistic pair of preferences.

There are some early covers that focus on railroads, cars, boats, etc., but only rarely. Sometime in the early or mid '30s, this category finds legs and eventually comes close to half of all covers. At first the category is more tech than landscape, though by the '50s they're about even.

The spike in the mid-'40s is due to the obsession with machine-saviors during WWII. During WWI, there was none of that sentiment: it was more about the heroism of an individual or team armed with rifles at most. Not only had we moved politically and economically closer toward Communism during the New Deal, but we also began worshiping big machinery and heavy artillery itself, and not the individuals who mastered it, just like some Stalinist May Day parade. Here's the cover from Feb. 26, 1944: 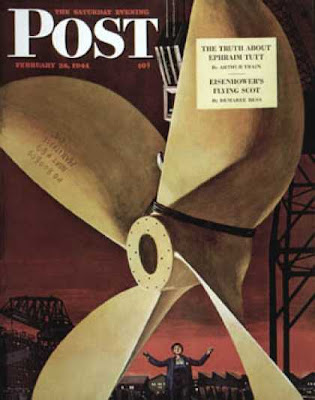 Although it calmed down somewhat after the war, the blind faith in and fetishization of technology would continue right through the '50s. It's only during rising-crime times that people grow cautious about unchecked technological change, which they see as potential evil magic. They believe more in the supernatural and magical because the rising sense of danger makes them search for extraordinary causes; it can't be one of the usual suspects.

At any rate, this content analysis should dispel some misconceptions about American society before the 1960s, as well as give detail to periods that we have no conception of at all. The fit with the rising-crime vs. falling-crime periods is very strong, just as it was during the recent cycle of violence. People were more interested in people during the '60s through the '80s, and have become more autistic in the past 20 years. The simplest reason is that when the world gets more dangerous, you need to reach out to others more in order to make it, but when it gets safer, you don't feel as strong of a need to hang on to them any longer.

I thought of putting together a gallery of covers from the more inspiring Jazz Age to counteract the machine worship above, but there's too many to choose from. Just browse around that first link to the covers. Harrison Fisher's portraits are mostly realistic, somewhat atmospheric pictures of inviting young babes. Art deco lovers will like J.C. Leyendecker's more stylized and ornamental portraits. And of course there are the All-American nostalgic portraits of Norman Rockwell, who hit his peak during the Jazz Age as well, not the '40s or '50s as you might have expected.

It's like how the '80s saw the dominance of Duran Duran and John Cougar Mellencamp at the same time. In more heroic times, every group does things better.