Last summer I took a quick (and drunken) look at how the rise of beer pong reflects lots of the trends during falling-crime times, such as an obsession with rules and structure, minimizing social interaction, passivity / inactivity, and so on. Nothing wrong with that stuff in its proper place, but when it dominates even a party setting, it's time to roll it back.

Beer pong at least involves a minimal amount of physical activity, the potential for things to get messed up, etc. How could we make it even more of a buzzkill? How about making a shot-taking game out of Battleship -- 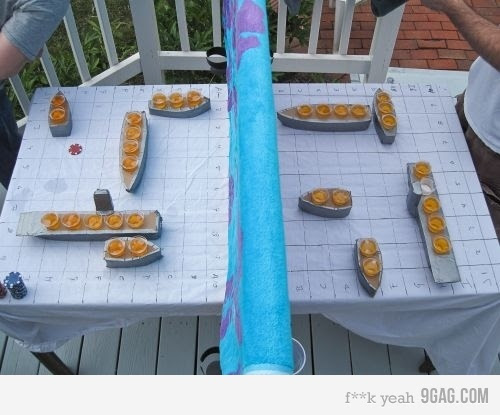 Do a google image search for "battleshots" and you'll see tons of pictures, and Google Trends shows that people started searching like crazy for the term in the last quarter of 2011. So who knows if it'll actually catch on, but I wouldn't be surprised. They may settle on a different board game, just something that removes what little physicality there is in beer pong.

The only level left to take it to is to combine shots with a role-playing video game based on one of the dorky franchises that Millennials love, perhaps SpongeBlotto.

By the way, this shows the importance of not just looking at quantitative data, which show that teenage drinking has been falling since the late 1990s. Even among those who do still drink, the whole experience has become watered down (sorry, that one was unavoidable).