Cold Case's portrayal of the history of crime

I've never watched the show Cold Case, but it and similar shows are popular enough that it's worth looking at to see what people these days want to believe about the pattern of crime over time. Like other TV shows, Cold Case does not warp the unwilling minds of viewers -- they'll just change the channel or not bother watching in the first place. It tells people a story that they already wanted to hear.

You could bicker over many aspects of the intended realism, but one of the least nitpicky ways is to look at how the crimes depicted are distributed over time, and compare that to the pattern over time of violent crime rates. *

Here's how the show's crimes stack up across the years, lumped into 3-year spans labelled by the middle year: 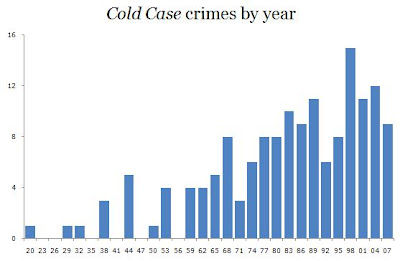 Only a few of the crimes took place during the Jazz Age, a period like the '80s that had seen violence rates rising for decades. Far more of the show's crimes took place from the late '30s through the mid-'50s -- the writers mistook film noir crimes for the real thing, as the homicide rate plummeted after its 1933 peak, through a low in 1958.

They do get the rising-crime era of the '60s, '70s, and '80s correct, although there's a very neglected span from 1970 to '72. That was still the heyday of the Counter-Culture, the anti-war movement, and so on, but it has been filtered out of public memory because it did not occur during the decade of the 1960s. All of that has been squished back into the '67-'69 span, where audiences will infer the context more easily. **

One of the least depicted spans of the more recent years is 1991-'93, centered around the very year when crime rates peaked in 1992. Since then, Cold Case crimes soar, even though crime rates have fallen off a cliff. So aside from the early '90s, the picture is that things started getting bad in the late 1950s and have only gotten worse since then.

That error shows up in all over -- that the influences of The Sixties have either remained or worsened. Some of them were reversed almost immediately, like the race hustling, although it did come back with a vengeance during the falling-crime period of political correctness and identity politics. Others lasted through the rising-crime period, like drug use, gregariousness, community-mindedness, religiosity, and equating love with sexual activity, only to evaporate during falling-crime times.

In any case, you might ask what the big deal is about some TV show misrepresenting the history. But if we're going to understand anything about what causes crime rates to cycle up and down, we have to at least have a good picture of what that rising and falling pattern looks like over time. Then we have to have a not terribly biased picture of what society looked like during the different rising and falling phases. After that, we can look for common threads in the rising and falling phases, or what society was like just before the crime rates made a turn upward or downward.

There's also something that feels like desecrating the past by erasing and re-molding its features, as well as introducing those of your own, to make it tell the story that pleases you. By exaggerating the violence of recent two decades compared to the previous three, they come close to trivializing the memory of murder, robbery, and sex crimes. Periods when serial killers were truly wreaking greater havoc are downplayed and not taken as seriously, while the safer periods are blown out of proportion like some middle-class wigger faggot trying to boast about how ghetto-hardened his life has been.

* You could be more accurate and look at the count of violent crimes, not their rate. But the main question here is did the period of falling crime since the 1992 peak show up in the TV show, and the population size did not soar during this time, so counts and rates will tell the same story.

** The Sixties (capitalized) last through 1973, yet our desire for uniform boundaries on time periods makes us confuse decades beginning with 0 and ending in 9 with a coherent zeitgeist. Similarly, The Fifties lasted through 1962.