Steve Sailer's political idea of Affordable Family Formation starts from his observation that American women have higher fertility rates where the land and housing is cheap. These states tend to vote Republican because their larger family sizes naturally lead them to prefer politicians who put family values front and center. So an electoral strategy for conservatives is to promote whatever conditions that make starting a family cheaper, one key part of which is access to housing whose costs won't bleed you dry.

I wonder if that couldn't work through a second path as well, namely by making housing more affordable for the average guy, he'll have an easier time finding a girlfriend to make his wife, rather than living at home forever like a bum. The "having had a g.f. or not" difference could influence his view of society, its institutions, and what policies he'll support, well before he's even in a position to consider marrying and starting a family.

If he lives in a place where housing costs are exorbitant, he can only afford something pathetic, and he will thus have a hard time getting a girlfriend. In this embittered state, he'll start whining about society's various power structures and in general be more sympathetic to redistributionist policies. Those who wind up at the bottom overwhelmingly favor Democrats to Republicans. If, instead, he lives in a place where decent housing is affordable, he'll be in much better shape for finding a girlfriend, not be bitter, and so be less hostile to politicians who cater to the doing-OK and the well-off.

This other angle on the Affordable Family Formation strategy assumes that higher home prices lead to more males sitting on the sidelines of the mating market. Is there evidence for that? Fortunately GameFAQs just ran a poll on relationship status. The respondents are almost entirely male and tend to be youngish (most in their 20s). Obviously they are not a representative sample because they came to the poll through a website for video game fans, but the question is whether or not the sample is biased. In other ones, I don't think so (like the one that asked about eye color). But here it probably is a biased sample -- though in a good way. We expect video game addicts to be less popular with girls, so if we find that cheap housing helps out even them, we're onto something. These are the guys we're concerned about -- semi-marginal ones who could go either toward getting the girl and thus feeling sanguine about traditional courtship (and perhaps marriage), or being unable to find one and growing bitter, turning against family values and politicians who promote them.

Here is a map of the U.S. showing what percent of respondents have ever had a significant other in their lives, where browner means more guys have had girlfriends and bluer means that fewer have: 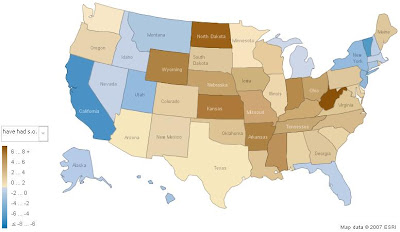 The average for the entire U.S. is 60%, although it's as low as 54-55% for California and Vermont and as high as 69-70% for North Dakota and West Virginia. The map is pretty close to a Red State / Blue State map, so I won't bother digging into the voting data to show that states where young guys have actually had a girlfriend tend to have a higher percentage of young males voting Republican. The apparent outlier of Utah could be due to the fact that early-20s Mormon males go on a mission for two years to convert others abroad, where they won't have the time to find girlfriends. (If someone else wants to look the voting data up, I'll provide a link to my dataset and you can run the correlation. Or maybe I will some other time.) I had an easy time finding data on home prices, though, so I did crunch those numbers. The Spearman rank correlation between the percent of young guys who've never had a girlfriend and median home value (for owner-occupied units in 2004) is +0.73, very high for the social sciences: 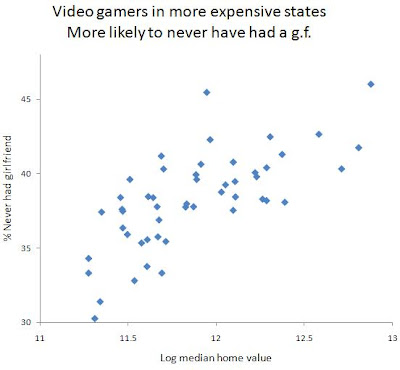 The housing data are from the recent housing bubble, but most of the increase in never having had a girlfriend occurs in the lower part of the home price spectrum. By the time you look at super-expensive states, diminishing marginal returns have set in: the guys there are basically as likely to never have had a girlfriend than those just below them in home prices. So I don't think the correction of the housing bubble will alter the overall pattern much.

There are two lessons to take away from this picture. On an individual level, if you care about whatever boys you may have, for god's sake raise them in a cheap-land state so that they'll have a much smaller chance of going through their teens and 20s without ever having a girlfriend. Talk about perpetual juvenile status. You want grandchildren sometime before you die, right? And on a societal level, if you want to keep semi-marginal males from turning into bitter losers who vote for family-unfriendly policies, make sure there is plenty of cheap land so that they at least have an honest shot at getting a girlfriend, rather than being shut out of the game completely due to living in a shoebox or with their parents forever.