Where do the art-lovers live?

GameFAQs just ran a poll about what your favorite subject was in high school. I excluded people who said "phys ed," then lumped the three artier ones together (art, language arts, foreign language) and the three sciencey ones together (math, science, social sciences). Then I found the percent of people who liked the arts classes out of everyone (excluding gym fans).

Across all of America, 32% like the arts classes. The map below shows each state's percent as a deviation from the national average, where browner means more art-minded and bluer means more science-minded: 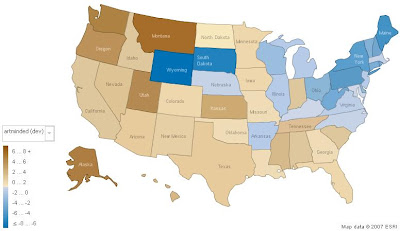 The main pattern is east vs. west, with the middle and southeast of the country at about the national average and an outpost of science people in the middle. You might've expected it to show the northeast as the most art-loving, or perhaps bi-coastal vs. flyover country. Yet that would rely too much on things beyond a person's basic preferences -- there's the price of going to a museum, whether there are museums nearby in the first place, etc. By just asking what their favorite subject was in high school, we're only looking at differences in tastes. Compared to people who live in New York, people in Montana would rather read about western American folklore or take up an arts & crafts hobby, and wouldn't give a shit what Malcolm Gladwell and Steven Levitt are up to.