Remembering history, from pre-agriculture to The Sixties

First, here's an excellent weekly podcast that discusses new books in history. You can search by category, and under "evolution" there's an interview with Greg Cochran on his book, co-authored with Henry Harpending, on how civilization accelerated human evolution, The 10,000 Year Explosion (also in my Amazon box above).

In the interview, the topic comes up of people not understanding history because they project here and now backward and elsewhere, such as American farmers who have never confronted a famine that killed 10% of the population. It would be bad enough if this bias blinded us to the decently far past, but it confuses us even about events that happened a generation or two ago, possibly within our own lifetimes.

To illustrate, here is how common the phrase "gay marriage" has been in the NYT during its more than 150 year history: 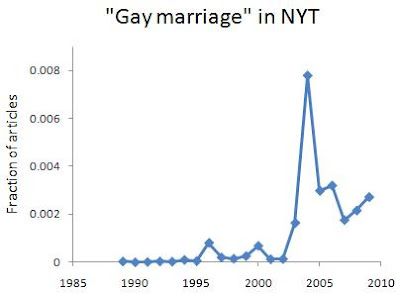 That's right, it doesn't show up at all until 1989, heralding the beginning of the early-mid-'90s culture war. It gets a surge during election years when it becomes a hot topic, and its decline during the 2008 election year probably reflects the fact that people were suddenly more worried about more fundamental things like their job security than about luxury issues like whether or not gays can marry.

The main point I want to make is that it was considered a non-starter -- or more likely not even considered one way or another at all -- during the previous culture war of the late 1960s and early '70s. We take the matters that have obsessed us during the most recent culture war and its aftermath and sloppily project them back onto the previous culture war -- if we're so focused on gay marriage and multiculturalism, surely those hippies and campus radicals back in the '60s were too, right? I mean, they were on The Good Side, therefore they could not have committed a sin like neglecting these central problems.

In reality, The Sixties had nearly nothing to do with "the politics of identity," which was the unifying theme of the '90s culture war -- i.e., multiculturalism, homophobia, sex/gender relations, the majority culture marginalizing the peripheral cultures, etc. The Movement back then targeted the government, the economic system, and the way they interacted with each other. To sum it up, The Movement was about fighting government oppression at home, smashing capitalism, and destroying the imperialist war machine.

It was only to the extent that "issues of race and gender" impinged on these political and economic matters that they were relevant. Only avant-garde groups within The Movement sought to understand the spheres of culture and gender / family / patriarchy on their own terms, rather than reduce them to political or economic questions, and to fight against oppression within these spheres, rather than wave their hands by saying that once the state and the bosses are fixed, all of that other bad stuff will go away, too. Most involved, though, did not follow this approach. That was left for the panic-preachers of the 1990s, when these questions really were pursued on their own and whose solutions people believed could only come through change within the cultural or gender sphere. E.g., by "having a dialogue about white skin privilege" among members of different cultures, or "creating safe spaces for female voices." An activist from The Sixties would have seen this mostly as pointless talk -- we've got to change the polity that oppresses racial minorities, or the economy that oppresses women.

I find it baffling that the popular conception today, especially among young people, is something along the lines of The Movement existing to establish affirmative action, free women from housewivery, and to let gays and lesbians express their sexuality openly. Not that these things were not part at all, but again they were minor and we are mostly projecting the '90s onto the '60s when we see them. The civil rights movement was about changing politics -- the state was denying some of its citizens their civil rights, and that had to be changed. Pretty simple -- no multiculturalism, no "conversation about race," etc. True, the basis on which the state was denying civil rights was along racial lines, but this shows what I said before -- race was only an issue to the extent that it had to do with bigger political issues. No one anywhere near the mainstream was talking about invisible, insidious "institutional racism" or trying to get black American speech recognized as a separate language ("Ebonics").

Feminism did not even explode until roughly the early-mid 1970s, mostly as a reaction by women in The Movement to how they were treated by their male comrades. "If this is supposed to be revolutionary, why are the women answering phones and mopping floors?" Don't forget Stokely Carmichael's remark that "the only position for women in SNCC is prone," though he must have meant supine -- i.e., lying on their backs. If feminism had had any importance in The Sixties, such a major figure would never have said that. After some agitation for women to enter the workplace, get equal pay, etc. -- notice, all reducible to political and economic oppression, nothing about "the patriarchy" -- feminism died by the late '70s / early '80s.

Gay rights were totally off the radar, even though the Stonewall Riots took place in 1969. No big economic or political angle? Well, we don't have to pay attention to it then. It wasn't until the '90s obsession with homophobia that the Stonewall Riots became widely recognized.

And does no one remember the Vietnam War and the anti-war movement? Jesus, of all the mass spectacles of The Sixties, wouldn't you think this one would make it into the front of the popular mind? But from our point-of-view, based on the '90s cultural war and its wake, the anti-war movement doesn't make any sense, so we've mostly forgotten about it. There's no strong racial or cultural angle -- other than that we were bombing people with somewhat darker skin than ours, but they're also Asian and therefore not quite as deserving of minority sainthood in the popular mind as are blacks. There's no gender-and-sexuality angle at all.

Nope, it was good old fashioned military might wielded by a rich country to show the other poor countries of the world who's boss and what will happen to them if they get out of line. There was also a civil rights angle -- namely the draft. Most Americans at the time were not very sympathetic to The Movement, but if they felt close on any issue, it was not wanting to send their sons off to some jungle hell unless they chose that course on their own. Thus bereft of any "identity politics" value, the war and the anti-war movement have been almost completely forgotten. That's especially true among young people who only lived through the '90s culture war and after, but I find lots of Baby Boomers talking this way too -- and they have personal memories of it all! It would just make them stand out as weirdos and old fogies if they tried to talk about it how it really was, so instead they re-cast it in terms of the '90s culture war, making themselves feel like their anti-establishment attitudes are still current.

Another unfortunate consequence of the anti-war movement going down the memory hole is that the popular mind has lost sight of how confrontational and riotous those times were -- firehoses trained on blacks, students storming the 1968 Democratic national convention, Weathermen bombings and Days of Rage, and on and on and on. It did not consist of a bunch of pacified 20-somethings having a conversation -- perhaps a heated one -- in a college classroom, a coffeehouse, or wherever. The Sixties took place during the crime wave that lasted from the late '50s through the very early '90s, so the greater level of violence shouldn't be surprising. The '90s culture war took place as crime rates started plummeting, and once more we've projected this relative lack of confrontation back onto The Sixties and portray it as a largely intellectual ferment that sought solutions through having a conversation. In reality, it was "why talk when we can smash?"

I've strayed from the main topic a lot because my real goal here is to make sure this understanding is written down somewhere. I haven't seen a detailed treatment of the error in thinking that the '90s culture war was just an extension or re-awakening of the '60s culture war. Their central concerns barely overlapped, their solutions therefore were very different, and their tactics couldn't have been more at odds with each other.