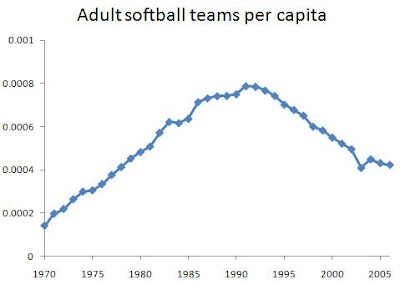 Here's another demonstration of the sociability and team-mindedness of people tracking the crime rate. The Statistical Abstract of the United States has data on the number of adult softball teams (baseball must be included in this), and I've divided them by the total population. Because the size of a softball team is basically constant across time -- free of bias with respect to time, at any rate -- this picture also tells us the fraction of people playing softball.

It began steadily rising at least since 1970, when the data begin, up through 1991. (Based on what I've seen of the 1960s, I'd guess it was rising during that decade too, maybe back to the late '50s.) Then 1992 begins a steady fall up through 2006. This exactly matches the movement in the violent and property crime rates.

There are influences in both directions. When people are more out-and-about (for instance playing softball), crime increases because there are more sitting ducks for criminals to exploit, unlike when everyone is locked inside. And when crime is soaring, it's always part of a rise in wild behavior overall. Being outside playing softball is more adventurous than staying inside, and it also brings together people to cooperate as a team, which they feel a greater need to do when the common threat of crime is rising.

At some point people have had too much with their exposure to crime and begin to retreat from public spaces. This drains the pool of potential victims out in plain sight, so the crime rate falls as a result, which in turn gives people less of a feeling of facing a common threat, so they don't feel so keen to form teams, socialize, and otherwise look out for one another. Now they're either hiding indoors or leaving only for a brief time to get a massage at a day-spa or stare at tire rims in a display room.

It's very hard to remember, even for those who lived through the entire period, but from the late '50s through the very early '90s, adults actually had a life. They weren't hunkered down in their homes like during the falling-crime times of most of the '30s through most of the '50s, or the more recent period of the early-mid '90s through today. Every weekend when I was only 3 or 4, and they in their late 20s, my mother would drag my dad out to a dance club where she could cut a little rug to the new wave explosion of the early-mid '80s. Back then they made use of a strange arrangement known as "finding a babysitter" (I think it was one of their friends from work).

If that had taken place during the past 15-20 years of the increasingly helicopter parent culture, Child Services probably would've robbed them of their custody. Parents aren't supposed to do anything fun anymore.