Western US less morally decadent than eastern? Data from support of piracy

GameFAQs, a popular news and discussion website about video games, runs a survey every day and gets tens of thousands of responses. The average user is who you'd expect -- male, age 21-25, etc. Because of this bias, you wouldn't want to use these surveys to see how much the average American plays video games. But other surveys would hardly be affected by this bias, like recent ones they've run on eye color and whether your name for soda is "soda," "pop," or "coke." This year's surveys also have maps by US state, by country in the world, etc. They only show what the most common response is, not an average, because many of their surveys don't have numerical answers.

Yesterday's survey was how bad you think piracy is for the video game industry. Admittedly it's not as bad as it is for music, but using emulators and stealing ROMs is rampant over websites and peer-to-peer file-sharing. That's not just for old games that are hard to find real copies of anymore -- and even those are now available for legal download, for a price, on current game consoles. I recall during my downloader days about 5 to 10 years ago that I played Mario Kart 64, a game not even 10 years old at the time, as well as many games for the Game Boy Advance, which was a current system at the time.

So the obvious answer is that it is a problem. The more that video game companies believe people to be illegally downloading their games, the less incentive they have to re-release the older games for new systems, and the more they will charge for current games. But that's only a problem for the creators of video games and the majority of video game players -- not a problem for the acne-stricken shut-ins who spend most of their day stealing music, TV shows, movies, and even video games.

Because this is such an easy question to answer, we can use responses to gauge how selfish and greedy people are across the US, at least with respect to stealing something that you expect not to be punished for. These responses only reflect people's beliefs, but their actions would probably be pretty close (you'd have to control for internet access, income, bla bla bla). But that's more important anyway when judging culpability -- did they act out of desperation in the heat of the moment, or do they have regularly selfish thoughts in this domain?

I took the percent of respondents who gave either of the two clearly wrong answers (that it's not a big deal at all or that piracy helps companies), and subtracted the percent of all Americans who gave these answers. This tells us how a state compares to the national average and makes the map below easier to read. 45% of Americans overall see no negative consequences, and the extremes are 9 percentage points higher than that (Maine) down to 8 percentage points below-average (Wyoming). The bluer states are the more anti-piracy states, and the browner ones are the more pro-piracy states. The ones with very light shading of either color mean they're pretty close to average, while dark shading shows more extreme values. Here are the results (data here): 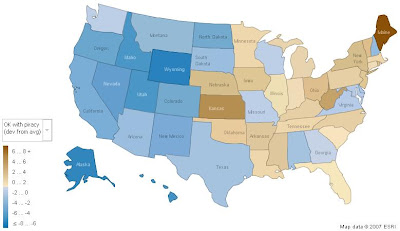 There are a few outposts of not-so-selfish people back east, but they're pretty lightly shaded. The clear picture is an east - west split. The two most selfish states are both eastern (Maine, then West Virginia), whereas the two least selfish states are both western (Wyoming, then Alaska). This shows that race plays no role, or we would see the typical split between California, the South, and the Bos-Wash Corridor vs. the rest of the country. The most extreme states on either side are almost entirely white. And it's not a bi-coastal vs. fly-over country split, so nothing to do with the Culture Wars of the past 20 years.

The map that this most closely resembles, from my memory anyway, is the per capita number of Starbucks, also a mostly east - west split. (The Spearman correlation between the two is -0.58 -- more Starbucks per capita, less support for piracy.)

You could use all sorts of surveys to measure how selfish people are, but this one is pretty straightforward. Ask a bunch of young males whose obsession can be stolen without them being noticed or punished, "Does that harm the group being stolen from?" It's not "Would you ever commit murder?" but again we get a clearer view into the moral guide within their mind. It's not some extreme example that they have no way to respond to meaningfully, and it shows how easily they would take the next step down the slippery slope. For instance, piracy is devastating the music industry much more, and do you think someone who looks the other way for video game piracy is going to say it's wrong to pirate digital music? Or TV shows or movies?

For those who have never lived in the western half of the US, it may seem surprising that they'd be less self-deluded about the harm to a stolen-from group -- that's not the Bible Belt of the south, and what about all those ethics professors back on the east coast? Perhaps the lower level of moral decadence in the western half reflects who was likely to migrate -- namely those with something of an enterprising spirit, who would naturally be more wary of flimsy rationalizations of theft against businesses. They could've just stayed in West Virginia and turned to petty crime, bullied their bosses into giving greater compensation, or gone on the dole, but they chose to blaze a trail and make it out west.

Peter Turchin, in his book Historical Dynamics, reviews a lot of sociological work going back to Ibn Khaldun that notices a difference between a more moralistic frontier region vs. a more decadent center of an empire. A code of solidarity or fellow-feeling holds up the frontier, while the center is tossed about by the logic of "let the devil take the hindmost." Historically, this enabled the barbarians on the fringe to invade and take over the debauched elites in the center, and the cycle repeated itself. Judging from the map above, that is just as true today in America as in southern Europe during the twilight of Rome.