At the opposite end of the artistic greatness spectrum from epics or lyric poetry, we find satire and muckraking AKA literary journalism, the social novel, etc. (The lowest combine both genres a la The Colbert Report.) Aside from being too focused in time and place to have much appeal to people over there later on, the author feigns distance and objectivity as though a saga were unfolding from his tongue, but is in reality as partisan and involved as a 13 year-old girl spreading rumors about the better-looking girls at school. We don't care if you're going to make it personal -- just be sincere about it. Don't front.

And the themes treated are rarely the Big Ones like good and evil, love, death, the supernatural, revenge, family conflict and cooperation, opposites coming together against a common enemy, and so on. There may be a hint of these, but it is always in service of the overarching themes of how clever and saintly the author is, and why the author's cultural tribe is like definitely so much better than the other ones being satirized or raked through the muck.

People from several thousand years ago were inclined to dicing up their cultural adversaries, but none of this has been successfully passed to wide audiences throughout the generations. The Odyssey, Oedipus Rex, the Bible, The Aeneid, The Divine Comedy, Hamlet -- these have a much better shot at surviving for several thousands of years more, and not works that mock some king or pope or other, that chronicle an obscure quarrel between literary geek factions, or that whine about how managers compensate their workers.

Previously we saw how waves of violence shift the culture in the Big Ones direction -- if something could do you in tomorrow, you'd better think about more important things than whose wig style to lampoon in your next devastating mock heroic. Then when people perceive the world to have gotten much safer, they return to their default state of petty status-seeking. That's true for both producers and consumers, since if no audience existed for a certain type of work, the creator would typically not bother making it. Using available data on homicide rates, there were three huge waves of violence before the 20th C. -- during the 14th C., from ca. 1580 to 1630, and from ca. 1780 to 1830. That's where the heavy shit in Western literature comes from. After these peaks subside, we get Renaissance Humanism, the Age of Reason, and Victorian Realism, where the focus shifts from the meaning of life to how totally awesome it would be if the author's tribe ran the world instead of those clueless, heartless philistines in power.

What instances of this pattern do we see here and now, given that we've been going nearly 20 years and counting without crime or other forms of wildness flaring up like they did from 1959 through 1991? The literary culture, especially for the average person, has become less central, so we should probably look to the cinema. What movie genre has seen an utter explosion in popularity during these safe times? -- documuckaries. Consider:

- The IMDb list of top rated documentaries, unlike for other genres, shows movies made almost exclusively during safe times (the American ones anyway, and leaving aside the 26-second Zapruder footage).

- Box Office Mojo shows that the 100 highest grossing documentaries, unlike for other genres, were almost exclusively made during safe times. 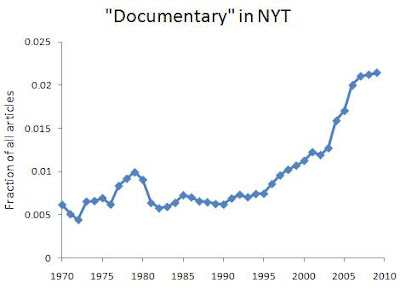 These three independent sources all show a fairly static picture during most of the high-crime period, a rumbling underway by the late '80s and taking hold by the mid-'90s, and a takeover from then on. Fortunately it looks like it won't grow any further, but it's not clearly heading back down either.

Before, the enfant terrible used to be Roman Polanski or Dennis Hopper -- now it is Jon Stewart or Michael Moore. I think we'd all agree to a higher risk of getting murdered if it meant cancelling The Daily Show and recovering the Saturday Night Live of the late '70s and late '80s / early '90s.