Here's how frequent the phrase "World Cup" has been in the Newspaper of Record since it began in 1930: 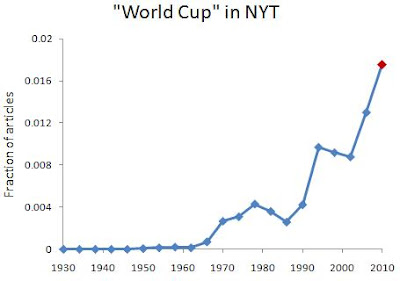 The 2010 data-point is as of June 12, but probably won't be very different by the end of the year, at which point no one would care anymore.

Not even the liberal elites started caring until the 1966 World Cup; the first two received zero mentions, and the third only one mention. Both the 1942 and 1946 World Cups were cancelled, yet the NYT believed that its American readership wouldn't have cared since it didn't mention "World Cup" during these years. Just imagine if two consecutive Super Bowls were cancelled -- the NYT would still discuss "Super Bowl" in those years, if for no other reason than to cover the fans' outrage.

From 1970 to 1990, there was a steady, low level of interest. It's only during the '90s and 2000s that the NYT's audience really started to pay attention. There is lots of discussion about how to make soccer-watching more widespread among Americans, given its low scoring, no-hands allowed rule, etc. But nothing has really changed in the rules over the time that it's shot up in popularity here (to the extent that it has). Rather, what will convince a lot more Americans to follow soccer is persuading them that soccer-followers are more sophisticated and cosmopolitan than those provincial boors who watch football. Pretending to like soccer is another part of the Stuff White People Like phenomenon of the past 20 years.

That might seem like a strategy with limited maximum reach, but look at how widespread designer toilet brushes are, or how even ordinary supermarkets carry cheap cans of fire-roasted tomatoes with garlic.