While messing around with the NYT's search function, I was surprised to find out how far back the slur "white trash" goes; Wikipedia says at least back to 1830. Supposedly it began among black slaves, but obviously they were not writing the NYT articles where it shows up. Rather, the Good white people adopted it to disparage the Bad white people. Because it goes back so far, we can use its prevalence in the newspaper of record to see how intra-white tribal warfare has changed over time. * Here are the results (click to enlarge): 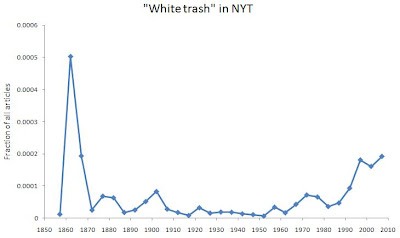 I did this before (with finer resolution) for the prevalence of the slur "nigger" in the NYT. The two graphs look almost identical as far as upward or downward swings. This is because when racial tensions flare up (as measured by how often "nigger" appears), the Good whites want to make it clear that they're not Bad whites, who they must then publicly cast out of the tent of white people.

There is one large exception to this close correspondence, though: the graph for racial tensions shows a decline from the second half of the '90s through today, whereas the graph for slamming Bad whites shows a continued increase from the early '90s through today. This confirms the larger picture that people have put together about polarization increasing during roughly the past 20 years, although typically they're talking about political parties. Apparently it extends more broadly to conflict between Good vs. Bad white people.

For most of American history, Good whites were dissing Bad whites for having backward views about blacks. Now that there's so little racism left, though, Good whites cannot use that as their ammunition, so intra-white conflict doesn't track white-black conflict as before. Now white trash people are mocked not for backward views about race, but for the entirety of what sets them apart as a separate tribe from Good whites -- their hairstyles, music, clothing, cars, slang and accent, interior design concepts, etc. In fact, the more specific slur "trailer trash" only appears in the NYT in 1992 and has grown since.

By the way, there's no clear relation between racial tensions -- either black-white or intra-white -- and the homicide rate. I would've expected dangerous times to lessen intra-white conflict because they feel the need to come together against a common enemy (as after 9/11), and safe times to allow white tribes to indulge in tiresome squabbling (like the past 20 years). But the ups and downs in racial tensions don't match those of the homicide rate. Rather than white racial solidarity being tied to the danger level, it's probably something like patriotism or nationalism instead that responds to danger.

* The data points are from 5-year blocks, the first and second halves of each decade, and they are plotted by the middle year of the block. So one data point is for the 1990-1994 block, and it shows up under 1992.