A second shot at girliness: some data

Having defined my index of feminine personality as 4 parts Neuroticism plus 1 part Agreeableness, here is how it changes across the lifespan (click for larger image): 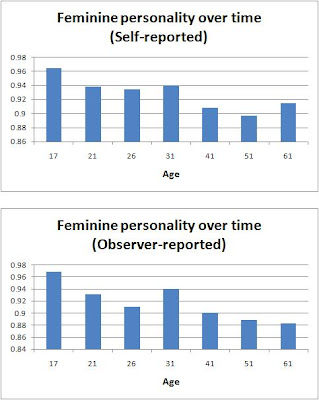 I've scaled Neuroticism and Agreeableness to be fractions of the maximum raw value, so that they and their weighted sum lie between 0 and 1. (That is, 0 is no girliness and 1 is 100% girliness.) The value at one age means the value from that age to the next (e.g., 31 averages all 30-somethings). Age 17 represents the average from ages 14 to 20. I read the data off of two charts in this paper on personality and aging, which summarizes the existing literature and contributes new data on adolescents. "Self-reported" means the target individual filled out a questionnaire, while "observer-reported" means someone who knows the target filled it out. The data are pooled from males and females, since there's apparently no similar presentation of the changes in these traits among females only. But males and females probably change in the same direction as they age, so this still gives a good idea of what just females are experiencing.

It's no surprise to me that adolescents score the highest of all, although if you've forgotten what adolescence was like, try to recall how boy-crazy the girls were, how nervous they were at school dances, and how your girlfriends got butterflies in the stomach just seeing or thinking about you. (To those who needed reminding -- doesn't that seem like a previous lifetime?) It's also no surprise to me that 21 to 25 year-olds score show a huge drop from the adolescents: those immediately post-college years are when you first notice that girls aren't quite as girly as before. The mid-to-late 20s are a bit worse than the early 20s, again no surprise.

But then look at 30-somethings -- depending on who we believe more, they're either as feminine or a bit more so in personality than 20-somethings. There are several explanations for this blip in the data (it goes right back down afterwards). Maybe my index is wrong -- it produces something that seems so counter-intuitive. Or maybe some non-girly facets of Neuroticism are increasing from the 20s to the 30s -- say, Angry Hostility -- while the fall-in-love facets are decreasing -- say, Impulsiveness -- at a slower rate than the former were increasing. Then overall levels of Neuroticism would show an increase, but if we looked closer, we would see that it was not implying that 30-somethings are more likely to get butterflies in the stomach than 20-somethings.

Still, it could be real to some extent. If it were, here's my guess at why: after 30, the average woman can no longer deny that she is past her prime for good, is reminded of this fact daily, and begins to feel more anxious, vulnerable, self-conscious, depressed, and so on. By the time she's in her 40s, she's made peace with reality, and Neuroticism goes down again. I'll speculate even further that this "freakout at 30" response could serve the adaptive purpose of motivating a woman to snag another mate while she still looks OK. If the first husband was a good catch, he may have moved on to someone else by the time she passed 30. If he was a dud, this is her last chance to trade up.

After 40, the average woman cannot pass the looks criterion of all but the dregs of the male sex, so there is no point in having a girly personality to attract additional mates. Plus, she's about to enter menopause and, if the Grandmother Hypothesis is correct, will soon shift from an emphasis on her own kids to her grandchildren who need rearing. You definitely want a less girly and more nurturing personality for this phase of life.

So far, we've seen how girliness changes across the lifespan, and there may actually be some good news for those in need of help. In the next part, I'll present some concrete examples of older women who have fairly girly personalities, why they do, and how others can follow their example.