Do pretty girls in traditional areas have more feminine personalities?

Out here in the Mountain Time Zone, there is much less of a caste society like there is in the Bos-Wash megapolis or whatever the counterpart is on the West Coast. It is so striking that I noticed the lower degree of assortative mating in looks right away. But aside from hot women not marrying hot men as much, there is also less cross-assortative mating between hot women and ambitious, testosterone-addled men -- the trophy wife / tribal chief pattern.

Everywhere I go, I see 7s, 8s, and even 9s doing couple activities with bums. I don't mean they aren't very rich but are still ambitious and exciting in some other way -- they are just all-around dull and content to be mediocre. If you are a lazy, degenerate skateboarder, there is no better place to be for scoring with 7s. When interacting with girls in clubs, the same is true: pretty girls are more approachable (less bitchy) out here.

On the one hand, the sight of this makes my toes curl because it does not bode well for the further development of this part of the country -- at the end of the day, getting a hot wife (or two or three) is a big piece of what motivates the energetic go-getters to build and maintain society. When they come out here and see the pretty girls out with losers, they head back to a more civilized region where their ambition will be better appreciated.

On the other hand, it sure is nice to be surrounded by pretty girls who aren't hypercompetitive ball-busters! In a place where the trophy wife / tribal chief pattern predominates, the daughters of these marriages -- really, the majority of hot girls, since their mothers are monopolized by the Big Men -- inherit good looks from their mother but a more masculinized personality from their father. As this process grinds on, gene variants for good looks and dominating personalities get sorted into the same pool of upper-class families, while the lower class families absorb gene variants for ugliness and laziness, with even more generations for this dynamic to play out within the earlier settled Bos-Wash region.

Here, though, alpha males don't pollute the pool of hot women, generation after generation, with their testosterone. It's a generation-scale version of the pretty girl who remains chaste and free of STDs until you defile her on your wedding night. You'd be the first driven guy to get his seed into her family's lineage, rather than taking the sloppy seconds of all her alpha-male ancestors. We'd sleep with a hot girl who we thought had a shady past, but there would be an aversion to overcome. Likewise, we'll date a hot girl who is somewhat feisty, but we still wish she would tone it down a bit in the relationship.

This difference must be true on a larger scale. Look at the Middle East, an area reknowned for powerful men hoarding the hot women to themselves -- this is just as true today among the people Steve Sailer calls "men with gold chains," i.e. the Lebanese or Persian businessman, his out-of-this-world wife, and their bratty and attractive children. Now, I'd rate Persian girls at the top of the attractiveness scale, but they certainly are more competitive and get-outta-my-way than I prefer girls to be. South Asian-American girls are the same way, if a bit less attractive than Persians.

Could this be the allure of the Eastern European woman? Well, we'd have to be more specific, since Poles are not the same as Russians, who are not the same as Serbs. Still, I'll bet someplace within Eastern Europe lies the European counterpart of the Mountain Time Zone, where pretty girls pair up with insipid, lazy bums. Probably not Russia, since they have had an empire and been a superpower over the past couple hundred years. The best bet is likely a rural town in Poland or one of the Southern Slavic countries, ideally one that's undergone recent population growth so that there is a larger sample to judge.

I think Spain, and perhaps Portugal, are like this too. According to meta-analyses of sex differences in personality, the two most defining traits of females are agreeableness and emotional instability, and Spanish girls are very much this way. It can't be an accident that everyone who goes there, however briefly, falls in love with at least one of the local girls. Spain was something of a world player half a millennium ago, but far before that the European inhabitants didn't have much power, and they became losers not far afterward. Certainly since the early Modern period, Spain has been a largely peasant backwater country. This probably means that the trophy wife / tribal chief pattern has not ruined the femininity of pretty girls to the same degree as elsewhere.

Now, lest this post be devoid of references to teenage girls, I'll conclude by linking to a very old post about a Spanish girl who befriended me over the internet during my stay in Barcelona. She is 15 in those pictures, and I was 24 when she contacted me. Her family is originally from the less developed region of Murcia, though they moved to Catalonia for brighter job prospects. At the risk of getting too sentimental, she is simply one of the sweetest, silliest, and most caring girls I've known. I've seen pictures of her mother when she was young, and she too was pretty attractive. And I've seen pictures of and heard stories about her father -- he's a good honest guy and all, but definitely a schlub. Still, thank God, or else Lucia would have been snippy and selfish. 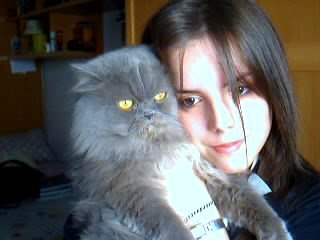 Related: Are pretty girls in traditional areas less stuck up?