We'll soon see a return of the Manic Pixie Dream Girl type, now that we're into the restless warm-up phase of the 15-year cultural excitement cycle, since that is the phase during which they appear.

That post looked at their character traits, and a pair of follow-up posts (here and here) showed that these girls are overwhelmingly born during the manic phase of the excitement cycle. They imprinted on a social mood that was carefree and invincible -- just what she needs to take the initiative and coax a wary love interest out of his vulnerable-phase cocoon.

Having covered their personality type, we continue on to their physical type. Height plays no role, ranging from 5' shorties to the 5'8 tall-for-a-girl end, although no one in the model-tall range. Not surprising: guys do not care how tall a girl is, one way or another. Still noteworthy, though: "taking the initiative" here does not mean being a tall amazon aggressor.

They have hourglass waist-to-hip ratios, which is not too surprising since that's what guys prefer in general. But it is worth noting that they are not relatively slim-hipped women with higher testosterone -- that's not the source of their taking the initiative with the guy. They have a feminine, fertile shape, reinforcing their role more as nurturers -- coaxing the guy out of his shell to heal him of his emo sickness, not strutting over to seduce him like an aggressor.

And to return to a perennial theme here, are they boob women or ass women? They are not busty: most have a B cup, with somewhat more A than C cups. Not being a boob man, I'm blind to them, and this was all news to me. I had no idea Natalie Portman was an A cup (guess she didn't get that particular Ashkenazi gene).

The only D cup is Katy Perry, but that's not such an exception anyway. First, she has a thick lower body. But to the point, I listed her because of "Simple," and in that 2005 video they dressed her in a baggy shirt so you can't tell what they're like even if you're paying attention. Their intuition told them it just wouldn't be right to have that persona coming from a girl with giant jugs.

Why not? Perhaps the sexuality would be too forward (literally) and threatening to a guy who is still wary about leaving his refractory-phase cocoon. Ass men would have no trouble ignoring them, but boob men would. The guy needs to focus on her facial expressions without distraction, to get back into the hang of back-and-forth social interactions with the opposite sex.

She must be corporeal -- a touchy-feely free spirit in tune with nature and physical activities (like dancing), whose plans to get the guy out of his funk do not involve over-analyzing things, devising Rube Goldberg contraptions, etc. "Let your mind go, and your body will follow" (SanDeE from L.A. Story). Guys coming out of a refractory phase need to be rehabilitated physically, not just mentally, and corporeal girls will be best able to perform this role.

That means they're mostly ass women, by which I mean the gestalt fertility zone -- belly, hips, ass, and thighs, as distinguished from the mammary zone. That doesn't mean they have Kim Kardashian-sized bubble butts, just that they're on the thick side below the waist (including indie darlings like Zooey Deschanel). And some are slender above and below. But if they have a tendency toward one zone over the other, it's definitely the fertility zone. In performances or pictures, they play up their lower half, not their chest.

In fact, what first tipped me off to this was the photo from an album cover by Au Revoir Simone, who I mentioned before (click for a larger view): 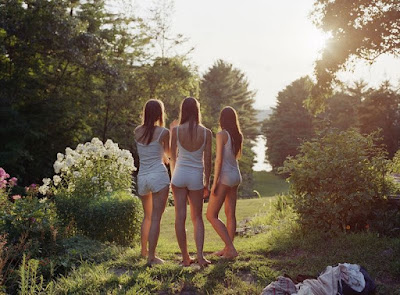 That picture doesn't show it, but they're not busty as well, nor do they attempt to draw attention to their chests. In their videos for that album, they're comfortable showing off their lower bodies and engaging in corporeal activities -- carefree dancing, playing hopscotch, bouncing their thighs and slapping their knees to the rhythm while seated on a bench, and the like.

I highlight their example because it goes against the overall stereotype of their upper-middle-class indie-world social scene. You'd think they'd be cerebral, dismissive of dancing, and averse to showcasing the lower body because that's what vulgar proles pay attention to. But just because the overall scene may be like that, doesn't mean there aren't exceptions like Au Revoir Simone, a corporeal minority within a scene of cerebrals.

As for social media personas, this all reminds me once again of Alison Balsam (@foolinthelotus on Twitter before she left) -- an early '80s manic-phase birth, a fertility shape rather than a mammary shape, and a dance lover. She had to have been a Manic Pixie Dream Girl during the late 2000s heyday -- the signs are still there, albeit somewhat obscured by the vulnerable emo phase she was posting in (late 2010s). Much like the type portrayed in entertainment media, there wasn't anyone else like her among the big-ish accounts -- no "Alison Balsam clones" or "that whole Alison Balsam crowd". The unique ones make an impression, and people can't get over it when they're gone.