Both the Establishment media and conservative regulars are framing Trump's success as an uprising of non-urban America over urban America. The media provides its consumers with ego flattery in the form of reassuring them that Trump voters are hicks in the sticks, while conservatives pride themselves on not being urbanites and want to flatter their own egos about the electoral strength of non-urban America.

But so much of non-urban America was already sour on the Democrats that there wasn't a whole lot more blood to be squeezed from that stone.

Rather, the key new partner in the Trump coalition was urban areas -- not just any, but those in de-industrialized regions. Industrialization produced large populations who are still there in the Rust Belt, even if it's down from their peak around 1970.

They may be forgotten cities, but they are still cities. In the Establishment and conservative mindset, whether you love 'em or hate 'em, only the thriving glamorous cities represent urban areas.

An earlier post on Election Day discussed these issues, and now we can see where exactly the large numbers of new Republican voters came from. We can also see which urban areas that used to be Republican have defected to the elitist party.

To keep the numbers round, I'm using "urban area" to mean a county with about 100,000 people or more. I only counted it as a flip if it was the same color during both Obama elections, and switched during the Trump election. Otherwise it already flipped due to Obama, McCain, or Romney. We're interested in the re-alignment brought about by Trump vs. Clinton.

First, a brief reminder of where urban areas are located: 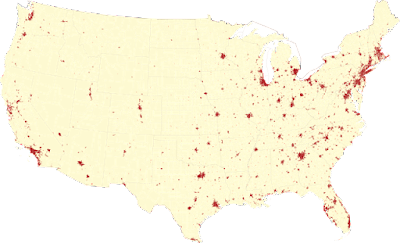 We can't expect flipping urban areas in the Upper Plains if there aren't any there to begin with. And they'd already be Republican anyway. 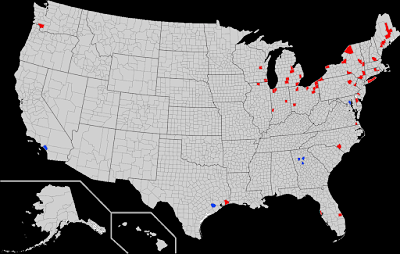 See the Appendix for tables listing the county, state, largest city, population size, and the last time it voted Republican (if it went to Trump) or Democrat (if it went to Clinton).

The worst offender is Orange CA, which hasn't voted Democrat since 1936. Next is Fort Bend TX, part of the Houston metro, that hasn't been blue since favorite son LBJ ran unopposed in 1964. Another favorite son, Jimmy Carter in 1976 and '80, was the last Democrat chosen by three counties in the Atlanta metro (Cobb, Gwinnett, Henry).

The only new blue county outside of the Sun Belt is Anne Arrundel MD, part of the Baltimore metro and home to Annapolis ("Drain the swamp"). It only narrowly voted Republican the past two times, though, so it's not as dramatic of a reversal. The last Democrat they voted for was LBJ in '64.

These counties are all affluent, and are natural defections as Trump re-aligns the GOP toward its Progressive Era dominance, when its guiding principle was husbandry of America's industries, relying on the native working class and industrialists alike.

What's disturbing is that when these new blue counties voted Democrat many decades ago, they were in line with the rest of the nation -- FDR, LBJ, Carter. Now they are voting blue at a time when the country has swung decisively red. They are joining their fellow nouveau riche parasites to make the Democrats the party of reactionary elites.

Turning to the blue-to-red counties, the bulk of them lie in the former industrial powerhouse of the Greater Northeast -- east of the Mississippi, and not the South. The two main sub-divisions are those along the Great Lakes and those in eastern major river valleys (Delaware, Hudson, Connecticut). Most of them contributed to winning the state for Trump, or at least substantially narrowing the margin (as in Rhode Island). The exception here is New York, where the gains outside of New York City were offset by the worse-than-usual Republican numbers within it. Not surprising, given all the yuppies, transplants, and immigrants there.

The largest counties here, with over half a million residents, are Suffolk NY (Long Island), Macomb MI, and Montgomery OH. I said in the Election Day post that a major Rust Belt city would turn red, and although it wasn't as big as Cincinnati, its large satellite Dayton turned red for the first time since 1988.

Just under half of these Rust Belt counties voted GOP for the last time as recently as 2004, although that doesn't mean they were reliably red before then. For some, 2004 was like 2016 a risk-taking year for the reliably blue county. For others, they had been drifting away for awhile, and 2008 was the crossing-over point. So Trump has both brought back lapsed Republican counties, as well as piqued the interest of blue counties who only vote red when things look really bad and they want someone to shake things up.

Nearly half last voted Republican during the 1980s, and a handful for Nixon in '72. Only two counties last voted GOP when it was a losing party (St. Lucie FL and Suffolk NY last voted red in '92). So unlike the new blue counties, the red-for-Trump counties have generally been on board with the rest of the nation -- for Nixon, Reagan, Bush I, Bush II, and now Trump.

And although W. Bush won many of these counties, he didn't win the states they're in because he didn't win enough of them at once, and by large enough margins. Sure, W. Bush won Racine WI in '04, but Trump also added Kenosha, which hasn't voted red since the '72 landslide. And W. Bush won Macomb MI in '04, but Trump added Saginaw and Bay, which haven't voted red since the '84 landslide. So W. Bush could only make a dent in Wisconsin and Michigan, while Trump won both of them. And W. Bush didn't win any of the three in Pennsylvania that Trump flipped, which last voted GOP in '84 or '88.

Outside of the Rust Belt, there are two flipped counties in Florida that helped win the state. Although it might not seem like a historic upset since Florida goes back and forth, these two counties (Pinellas and St. Lucie) have been solid blue since '88 or '92. I'm guessing the transplants there are refugees from the Rust Belt. They vote like them, at any rate.

Secondarily, there's a pair of Southern minority cities where Trump's no-BS appeal to blacks managed to convert two urban areas that are traditionally Democrat because they're majority minority. These are Robeson NC and Jefferson TX, which only voted Republican in the '72 landslide, and were Democrat before that at least back through 1960. Chesapeake VA is also nearly majority minority, and no doubt flipped red with the help of the blacks for Trump. That was a W. Bush county (and state), though, so it's not such a major reversal.

Finally, there's an outlier out West in Cowlitz WA, which is actually on the Oregon border and part of the Portland area rather than Seattle. (Oregon is the reddest state on the West Coast, notwithstanding the recent colonization of Portland -- imagine that for twice as long in Seattle, and five times as long in San Francisco.) There's no single big city there, but a collection of small towns with roots in the lumber industry. Since 1960, they've only voted Republican in '60, '72, and '80.

That flip is part of the "grungers for Trump" phenomenon that I've pointed out several times before. This now includes the hometown of Nirvana (Aberdeen WA), whose small county (Grays Harbor) has not voted Republican since 1928! At least they picked winners when they did decide to go red. Truly a return to the Progressive Era of the GOP.

This makes it clear that the main issue determining the election was populism vs. elitism, and that gaining the white working class in forgotten cities was smarter than trying to reach out to minorities in mega-cities. The losses on the GOP side reflect that: it was elitist whites who left, not blacks, Hispanics, or Asians (such as their numbers were in the GOP).

If we don't internalize these lessons, we'll slip back into the same anti-urban mindset that lost so badly over the past generation. Rescuing and re-building forgotten cities is not blind worship of urbanism, unlike the failing mindset of Establishment Republicans whose idea of urban outreach is making themselves as cosmopolitan as possible in order to win the votes of yuppies in thriving cities. The Trump movement can prioritize urban areas, as long as it's coming from an attitude of stewardship over American industries, rather than maximizing the incomes of carpet-bagging yuppies.