No showering at school in cocooning times

Looking through old horror movies, it's striking how many shower scenes there are, from Psycho through the Friday the 13th series. Some movies dialed up the vulnerability factor by making the bather's exposure public, setting them in the showers of a locker room at school: 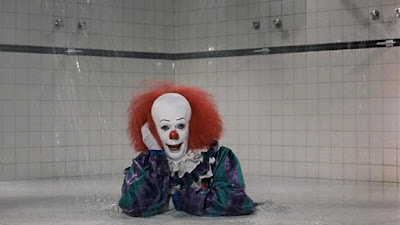 Then it hit me why you don't see these kinds of scenes anymore -- students haven't showered in the locker room for decades, so the intended audience of horror movies (teenagers and young adults) wouldn't be able to resonate with the setting. Carrie (1974) has a classic shower scene that anyone who went to high school in the '70s could have identified with. When they re-made Carrie in 2013, they kept the shower scene, but it must have felt forced and unfamiliar to adolescents of the 2010s.

Of course, there were public shower scenes in genres other than horror -- Porky's, Footloose, Heathers, and others -- but those are also from awhile ago.

To establish that these changes in pop culture are reflecting changes in the real world, I went Googling and found three articles from major newspapers, all in 1996: the first one from the Chicago Tribune, a follow-up from the NY Times, and yet another from the LA Times. The reporters interviewed students and gym teachers from various schools in their metro areas and were unanimous that high schoolers had stopped showering after gym class and extracurricular sports.

We can tell the change was abrupt because the gym teachers were in a state of disbelief, rather than saying that the shift had been gradually under way for awhile:

The antipathy to taking showers after gym class puzzles some teachers and coaches. "These guys don't want to undress in front of each other," said John Wrenn, a teacher at Homewood-Flossmoor High School in suburban Chicago, who can scarcely conceal his contempt for the new sensibilities. "I just don't get it. When I started in '74, nobody even thought about things like this. The whole thing is just hard for me to accept."


There was a court case in the Pittsburgh area in 1994, where the ACLU sued a high school to end public showering, arguing on privacy grounds (a fat chick didn't want to be embarrassed). The lawyer said he'd never received so much spontaneous positive response from around the country, meaning that this court case did not change the climate by itself but was merely reflecting the larger changes in attitudes that had already occurred throughout the country.

That's the earliest example that I could find, and it sounds about right from personal experience. I don't remember anyone using the showers in high school (fall of '95 to spring of '99). In fact, although I can recall what the locker room looked like and where the main doors and the staff office were located, I can't even remember where the showers were placed or what they looked like. My friends and I would just spend the extra 5-10 minutes of "shower time" shooting the bull.

It was like that in middle school, too (fall of '92 to spring of '95). Some of the metal kids went into the showers with their normal clothes on, and started headbanging once their hair had gotten soaked, but it was just a goof. Rarely, somebody would go in for real with their shirt off, but actually taking a shower in public -- never happened.

Here is a thread on Snopes.com from 2004 asking whether showering after gym class was a real thing or only something they showed in the movies. People who went to secondary school in the '60s, '70s, '80s, and early '90s all swear that it was real, and often enforced by the gym teachers. Nobody chimed in to say it was practiced in the mid-'90s or afterward. A more recent article from the Sun-Sentinel in southern Florida confirms that the no-shower trend has continued through the present, and was not just a phase during the era of grunge music, greasy hair, and heroin chic.

The timing of the rise and fall suggests a link to the outgoing vs. cocooning cycle, and sure enough I could not find reports of public showering at school being common in the first half of the 1950s or earlier -- i.e., the pre-Elvis cocooning era.

People in outgoing times are simply less self-conscious about their bodies because sociability requires higher trust levels than cocooning does, and trust means being willing to let yourself be vulnerable in public around other members of the in-group. In a trusting person's mindset, none of the other kids in the showers are going to try anything harmful, so why bother worrying about them? In the suspicious person's mindset, you can never know who's going to try to do you wrong when you're vulnerable, so it's best to just keep your guard up all the time. Certainly that means never uncovering your shame around others.

Only when people start withdrawing into their own private little worlds do they start to obsess over privacy and act compulsively about it. It's not a mere personal preference when 100% of students would suffer an anxiety attack from taking off their clothes in the locker room, let alone everyone showering that way. To students of the past 20-some years, it would feel more like child abuse to make the students vulnerable to the attention of their peers, all of whom they distrust, so that uncovering their shame in front of them would be the ultimate humiliation.

Not showering in public is not the only case of increasing anxiety about showing one's body in cocooning times. See this earlier post on the absence of flashing, streaking, skinny-dipping, and topless sunbathing (even in France) within Millennial-era culture. See also this related post about how young people stopped joining the nudist movement decades ago, making their membership increasingly saggy and gray-haired.

This wide variety of examples shows the importance of distinguishing between displaying your body because you trust other people not to do you wrong, and displaying it to whore for sex-appeal attention. The streakers of the '70s were not trying to increase their number of Instagram followers as an ego boost, but to put out an extreme form of the basic message about, "Hey man, what is there to be worried about or ashamed of? We all trust each other, don't we?"

Likewise, today's skin-baring young people would still drop dead from anxiety if they went out in public with no bra on, or if they went skinny-dipping with a group of friends. The code of "If you've got it, flaunt it" somehow doesn't translate into public showers, where the good-looking girls could easily one-up the uglier girls. But that would require them to be vulnerable in front a crowd of people they don't trust (their fellow students), so that's a non-starter.

Calling these changes "the new modesty," or whatever, would be foolish, given how narcissistic young people have become. "The new awkwardness" is more like it.