The only part of Donald Trump's platform so far that is not populist is his tax plan (read it here), but we shouldn't let that get in the way of voting for the far-and-away most populist-friendly candidate to come along in a very long time, especially considering how dominant his lead has been.

Since so much else of his platform is meant to return the nation to the norms of the Great Compression, and the pinnacle of the 1950s in particular, it's worth looking into whether it is actually the anomaly it appears to be. It turns out that the trend toward high income taxes of the Midcentury lagged behind the trend toward greater civic cohesion at the grassroots level. Only once that foundation was laid did people feel comfortable sacrificing so much of their income for the common good.

First and foremost was the trend toward a more ethnically homogeneous population as a result of plummeting rates of new immigrants, as well as the percent of the whole American population that was foreign-born. Both of these rates peaked around 1910 (the green line in the first graph shows the percent foreign-born): 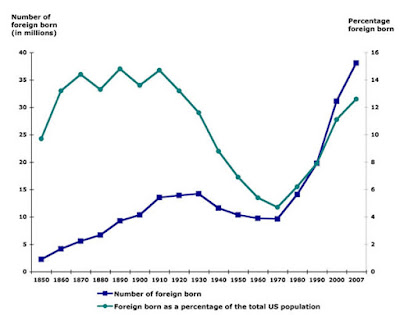 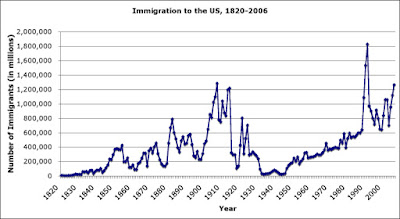 Nobody in any race or ethnic group would want a huge chunk of their income going to taxes that showered goodies on some alien, perhaps hostile, ethnic group. So first the American population needed to feel that they were a single, homogeneous group. That was impossible with so many foreigners streaming in during the Gilded Age. But once that reversed after 1910, it made more and more sense to think of ourselves as all Americans.

The other major trend was the labor union movement, which began in the late 19th and early 20th century, also well before the introduction of high income tax rates, or indeed before the income tax at all. Reducing immigration made people feel more ethnically similar, but some kind of labor movement was necessary to build up civic spirit and participation specifically in the economy.

Here's the history of the highest and lowest income tax rates since they were allowed in 1913 (see a table in this section): 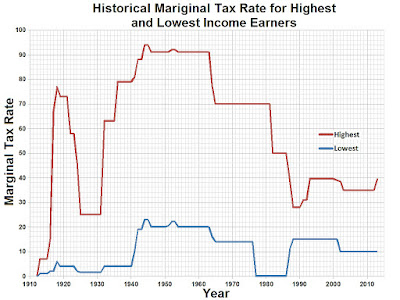 It would only go up from there, and remain high during the Midcentury, before tumbling off a cliff during the current long period of status-striving and widening inequality, where immigration has ramped up in true Gilded Age revival fashion. Notice that the percent of the whole population that is foreign-born hit a minimum in 1970, and began steadily rising by 1980 and after. The labor movement had already begun to take a beating by the '70s, and their influence has only weakened since then.

So we see in our current era a mirror-image of the earlier change. In the early 20th C., the first shift affected labor unions and native-born citizens, who rose in influence, and the second delayed shift raised income taxes. During the later part of the '60s and '70s, the first change was again with unions and native-born citizens -- only now they began declining in influence, and the second change lagged behind by about 10 years, where tax rates were slashed across the spectrum during the '80s (especially for the top brackets).

It would be facile to point only to the labor movement, as though it alone constrained the greed of the wealthiest, and as though the only major change during the Great Compression was taxing the hell out of rich people in crude class warfare style. In fact, even the lowest tax bracket in the '50s was paying 20 percent! There was a widespread feeling of "we're all in this together" and "we all have to make sacrifices" for the greater good of the nation.

That sentiment was only possible when the population was highly homogeneous, akin to the high taxes and generous welfare programs of the Scandinavian nations -- who, in case your social studies teacher didn't tell you, are among the most homogeneous in the world. It's not that they're highly white (which they are), but that they're highly regional-white rather than a mix of all European peoples.

See also Robert Putnam's trailblazing study showing that ethnic diversity erodes trust within communities -- not only among people of different ethnic groups, but even among those of the same group. (For example, in Los Angeles, white people don't even trust one another or form civic groups with one another.)

So, if Trump's tax plan looks typical of the current era, in contrast to his populist policies everywhere else, it's not so mysterious and is nothing to worry about. First we have to make the nation more homogeneous, and have more working people involved in labor unions, and then we can talk about raising taxes back to Midcentury levels, when we can rest assured that they'll be put toward the common good.

The focus of Bernie Sanders & Co. is putting the cart before the horse, wanting to raise taxes and trying to ameliorate inequality without first solving the problem of immigration and homogeneity.