Could there be an upside to the failure of individuals to coordinate their collective behavior? Yes -- if their purpose were anti-social or decadent. The decay on display in Baltimore provides a great case study.

It's no surprise that the rioting and looting are taking place in neighborhoods that are nearly 100% black. Blacks are more impulsive and inclined toward both violent crime and property crime. What is unusual, however, is that the neighborhoods that are closer to 50-50 black and white are not merely afflicted by rioting to a lesser degree than the 100% black areas, but are hardly affected at all. (See the maps at the end of this post.)

Rioting and looting are collective behaviors, however fleeting and decentralized. They do not require sustained interest and permanent institutions to carry out the collective will, but they do rely on a minimal level of in-group cohesion and trust in order to keep the snowball growing rather than flaking into pieces or turning the members against one another.

In fact, with a little more regular participation and a bit more of an "honor among thieves" relationship, coordinated crime by an organized ethnic group could sustain a gang or mafia, again provided the area belongs entirely to that ethnic group.

The mafia operated in neighborhoods that were predominantly Italian, not in those that were half-Italian and half-non-Italian. Black gangs controlled South Central L.A. back when it was all black; Mexican gangs control it now that it's all Mexican. If the neighborhood was only half-Italian or half-black, the mafia and gang problem was not simply half as bad as in the fully Italian or black areas, but could not get going in the first place. (Of course, they would have still been subject to individual-level crime, just not collectively organized crime.)

White enclaves in large cities tend not to be stricken by rioting and looting, because anti-social whites express their deviance in non-violent ways. When they coordinate their deviance at the collective level, they take over the local education system and ban peanuts from school grounds, they carve out bike lanes for non-existent bike riders while clogging the narrowed streets for actually-existing drivers, and they take over any business area that once supported a variety of normal utilitarian shops and turn them all into arenas for decadent status contests (quirky bars, quirky coffee shops, quirky doggie yoga day-spas).

Yet as in the case of black rioting, these collective insanities only infect neighborhoods that are nearly 100% white. If it's only 50-50, the hipsters and yuppies don't feel emboldened enough to organize their decadent impulses. They don't have the sense that their ethnic group totally owns the place and can do whatever they want with it, for better or worse.

Overall, diversity is corrosive to society at any scale. But there is a silver lining: it also prevents anti-social collective behavior from catching fire.

Maps of diversity and rioting in Baltimore

Here is a map of racial diversity around Baltimore. Blue dots are blacks, red dots are whites. (From a series of similar maps here.) 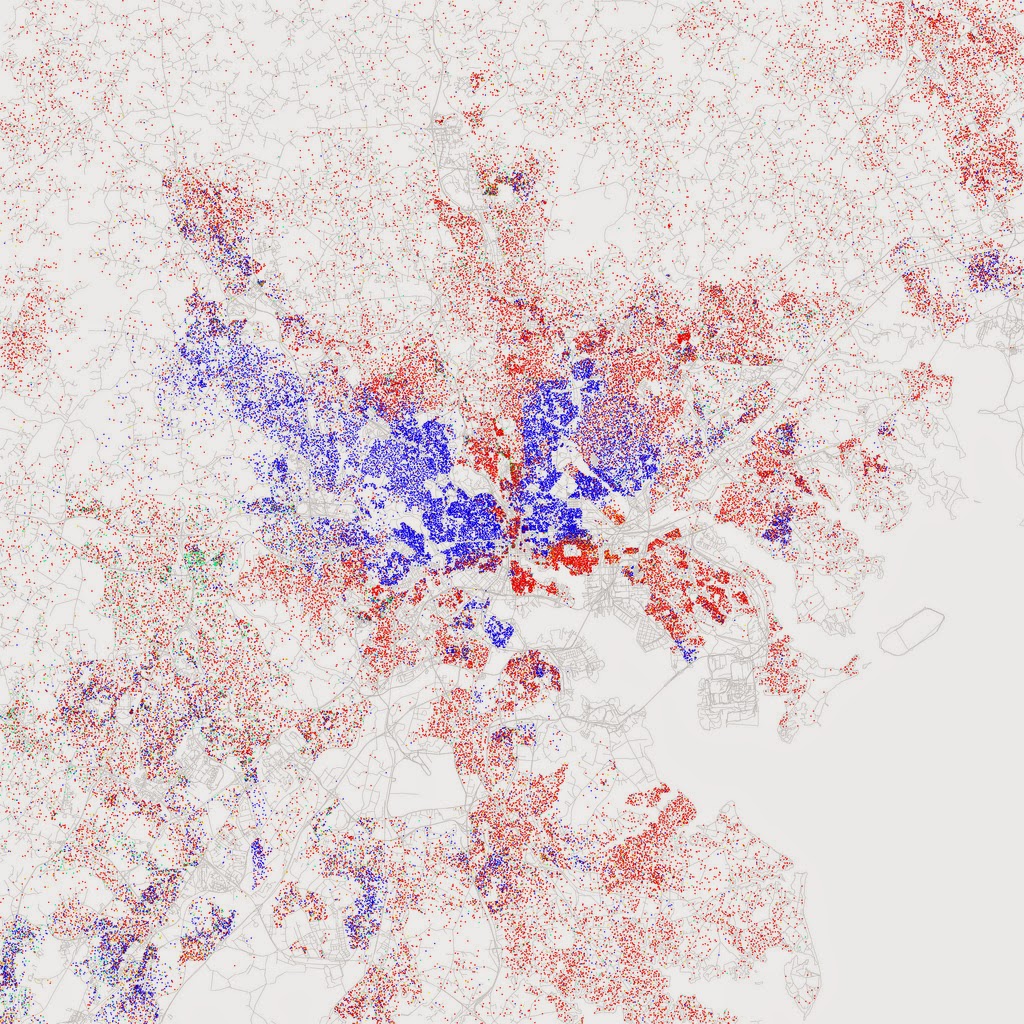 The core of the city is where the dots are the densest, more or less in the center of the image.

There are two stark areas that are mostly black -- West Baltimore and East Baltimore, close to the core. Farther away from the core (for example, toward the northeast), the blue dots overlap red dots, showing a more mixed area than a pure-black ghetto.

There are three main areas that are mostly white -- North Baltimore (the large wedge pointing south that separates the black areas to the west and east), and two smaller but denser enclaves that lie just south (on a tiny peninsula) and just southeast of the core (in a red ring).

Yuppie and hipster decadence is concentrated in the all-white areas, such as Hampden in the North Baltimore wedge, Downtown near the center, and Fell's Point in the red ring lying southeast of the core. To the northeast, there are still plenty of whites, but they live in more diverse neighborhoods. SWPL decadence in a "nice boring" place like Belair is not at half the level of Fell's Point, but barely there at all.

As for black decadence, here is a map of the major riots in 1968, overlaid with the riots in 2015 (which are much smaller -- though wait until 2020). They come from this article at Vocativ.

The scale on this map is more zoomed-in than the map of diversity. The major and minor riots have afflicted the all-black areas of West and East Baltimore, close to the core. There are plenty of blacks living out to the west and southwest, as well as out toward the northeast, but they find themselves in more diverse neighborhoods.

In these diverse neighborhoods, would-be rioters apparently don't feel they can trust their fellow blacks enough to carry out an afternoon and evening of looting, trashing windows, and setting cars on fire. If only they owned the whole neighborhood, "shit would git real". But with nobody trusting anybody else in a mixed area, they're going to just watch the riots on Wurl Stah and vent their aggression on Twitter.

When the neighborhood might otherwise be burning down, here's one cheer for diversity-induced atomization.