Are cops more likely to harm innocent whites in places of high diversity?

Like the Rodney King video of the early 1990s, the recent over-reaction of a white cop who shot an unarmed fleeing black suspect in the back in South Carolina will provoke much discussion about white cops and black victims.

Too many whites settle into the view of "Well, whatever the police have to do to keep the violent blacks at bay." But it is not realistic that a cop who is that callous toward blacks will somehow transform into a respectful servant when he's dealing with whites. The cop sees himself as pest control, and whether he has to unload his bug spray on hornets, termites, or your pet dog who didn't get out of the way like he was ordered to, makes no difference to him. All those different species of pests had it coming.

In Los Angeles, not only do whites not trust the Mexicans, they don't even trust the other whites, and remain fragmented and impotent to organize for their own collective good. It's the polar opposite from white civic participation in a homogeneous part of the country like North Dakota or Iowa.

In short, when an individual is confronted with a Tower of Babel environment, which offers no possibility of coordinating a group's interests at the collective level, he withdraws from communal life and focuses only on his nuclear family, or perhaps just himself.

I suspect there's a strong influence of this dynamic at work in the growing and unregulated police state around the country. You tend to only hear about it in places with high levels of diversity.

The apologetic white response is that white cops in such areas would prefer to stick to their preference of targeting only blacks and Mexicans, and leave the nice whites alone, but are compelled by The Powers That Be to appear less racist, and therefore go after innocent whites to "narrow the gap" and avoid harassment, firing, and shakedowns.

When you look into what white cops are up to, though, you don't see people who love their own group and hate different groups. You see people who are in a hunkering-down, under-siege mentality just like Putnam's research would predict for folks living in areas of high ethnic diversity. Only these paranoids are armed to the teeth and don't even have to let you know you're about to be raided.

Thus, the more likely reason behind white cops over-targeting white folks in highly diverse areas is not to appear to be closing the gap, avoid harassment by the federal Department of Diversity, etc. Those white cops simply don't trust their fellow white citizens.

Contrary to liberal propaganda, these types do not put "white pride" bumper stickers on their car, but ones that say, "I'm not racist -- I hate everyone equally". Again, they are not trying to avoid harassment by the anti-racism squads: they honestly perceive members of their own group as potential bugs that may need to get squashed if they act too uppity, like sleeping below the window that you lobbed a flashbang grenade through.

This is impressionistic, but I think on the right track. Unfortunately the data that could resolve these questions are not collected, let alone published -- over-reactions by police, broken down by race of cop and race of victim, and broken down by geography.

Here are a few suggestive maps, though. The first comes from the Cato Institute's effort to map out botched SWAT-style raids (see full details by using their interactive map here). The second is USA Today's index of diversity, showing the chance that two randomly chosen people will belong to different ethnic groups. 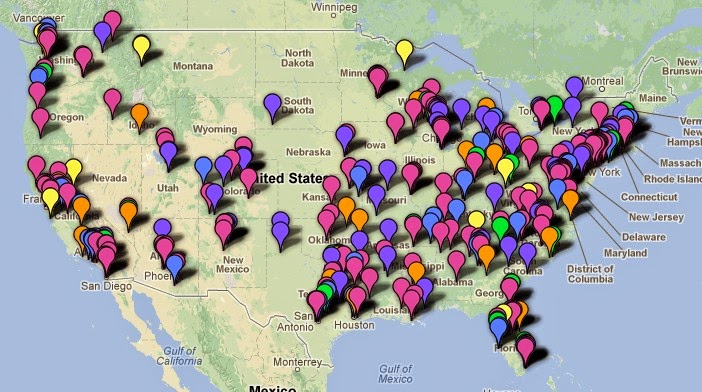 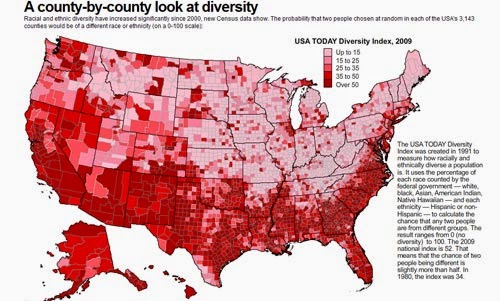 The raid map would need to be made into one showing per capita rates, but I don't think that'll make such a big difference. Also bear in mind that the pin marks look crowded and exaggerate how far north the signal goes, since it's only the point at the bottom that they are measuring.

Highly homogeneous states like Ohio and Michigan are in the top 10 US states by population size, yet there are few pin marks on the raid map, and most of them are near the few hotspots of diversity in the region, like Detroit and Cleveland. Smaller but more diverse states like Colorado have more pin marks. So do similar-sized but highly diverse states like Georgia.

Leaving aside the marks that represent the killing of a cop, and focusing only on harm from cops to citizens, Ohio has 7 pin marks and Michigan just 4. Their population size is 11.6 million and 9.9 million, respectively. Colorado has 10 pin marks, about as much as both states combined, yet it has only about half as many people as either state alone (5.4 million). Georgia also has 10 pin marks, while being comparable in population (10.1 million). What Colorado and Georgia share, and what distinguish them from Michigan and Ohio, is a much higher level of ethnic diversity.

Zooming into the city level, the Columbus metro area has 0 marks involving harm to citizens, whereas similarly sized metro areas that are highly diverse like Las Vegas and Orlando have 2 and 7 marks. The 90% white Pittsburgh metro area only has 1 mark involving citizens, despite being similar in size to highly diverse metro areas like Baltimore and Charlotte, both of which have 4 marks against them.

A more exhaustive list of incidents would have to be made, and a more fine-grained analysis performed, to settle the matter. But at first glance, it does appear that a higher level of ethnic diversity is linked to a greater tendency of callous over-reaction by cops.

Still, are the victims of these over-reactions white or black? Again we need better data. Sticking with the topical location of Charleston, SC, there is a pin mark on the raid map showing a lockdown style raid of Stratford High School in 2003, with the aim of busting up drug deals. Today that school is 60% white, and so back then would probably have been more like 65-70% white. Yet video from the school's surveillance cameras show whites as well as blacks being treated like bugs by the pest control.

Diversity not only corrodes civic participation from citizens, it also leads to callous aggressive harassment of those citizens by the police. This problem is compounded by the difficulty of citizens organizing in highly diverse areas -- they can't coordinate an effort to de-escalate the increasingly paramilitary tactics of their own police forces.

Whites and blacks both got harassed by The Man in Stratford High School, but blacks and whites can't team up on anything, so The Man is free to continue his SWAT-style raids into the future. See also the poor labor history of the South, where whites and blacks couldn't coordinate to collectively bargain with owners and managers. Worse: whites can't even coordinate with their fellow whites and fight a one-team battle against the elites.

This ought to be the focus of the anti-diversity movement for the 21st century -- not the obvious conflicts that will erupt between different ethnic groups, but the corrosive and authoritarian effects it will have within the white group itself. Putnam's research and these various real-world phenomena show that there is no silver lining at all to diversity, not even an emboldened "Us vs. Them" mentality. Instead it results in "every man for himself," the worst possible scenario.