Homelessness and rootlessness out West

From a post at Movoto, here's a map of how the states rank on the size of their homeless population per capita: 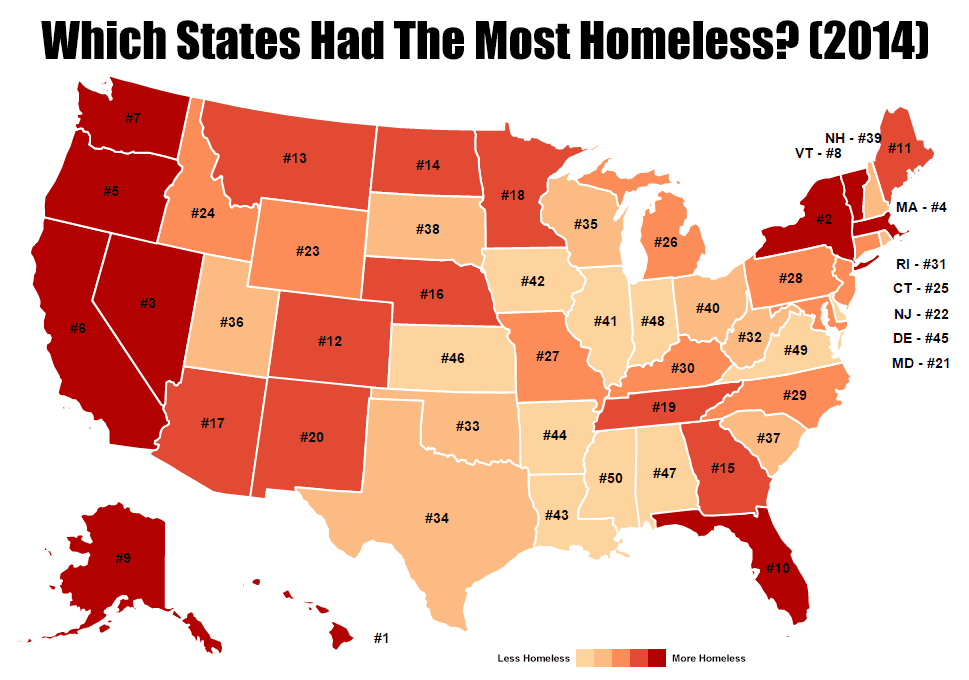 The West Coast, Nevada, Hawaii, and Alaska are all in the top 10. All the Mountain states are in the top half of the nation, except for Mormon Utah. The northern Plains states are doing poorly too.

There are pockets of heavily homeless states back East, but not entire regions. Massachusetts, Vermont, and Maine are up there, but not so much New Hampshire, Rhode Island, or Connecticut. New York is plagued by homeless, but the other Mid-Atlantic states aren't even in the top 20. Aside from New York, the only other centers of homelessness back East are in Florida and Georgia, and perhaps Tennessee.

Overall, though, the Deep South, Appalachia, the Midwest, and the southern Plains regions have comparatively small homeless populations.

These patterns reflect how deeply rooted the people are, with most places west of the Mississippi River having shallower roots than folks who still live where the original American settlers lived.

My hunch is that it's not just due to the shiftless, transient, and footloose tendencies of Frontier people, which would only apply to the professionally homeless. There's also those who are only temporarily homeless, and they ought to at least have family and friends to rely on for temporary relief, if the alternative is to live out of a car or on the street.

But where roots are shallow, people are less likely to have those connections. With less slack in the social system, a small accident is more likely to bring the whole thing down. Where roots are deeper, the norm is that "We take care of our own".

The data these maps were drawn from come from HUD, and reflect total homeless numbers. About 15% of the total homeless population falls into the "chronically homeless" group that we associate with drifters, bums, and the like. The rest are down on their luck, poor, lazy, addicted, or something else that makes them prone to occasional homeless living, without it being a full way of life.

I've downloaded the HUD data for myself, so if there's time, I'll re-do the rankings looking only at the chronically homeless, to see where the bum problem is the worst. Glancing over the numbers, it looks like that will tilt the rankings even more toward the West.

The data are also broken down into smaller geographic units below the state level, so we can see which cities and metro areas are more over-run.