Luggage over the years: Bloated vs. unobtrusive (more pictures)

After making six flights within a few weeks over the holidays, it struck me how much luggage people are carrying these days (and not only around their mid-section): 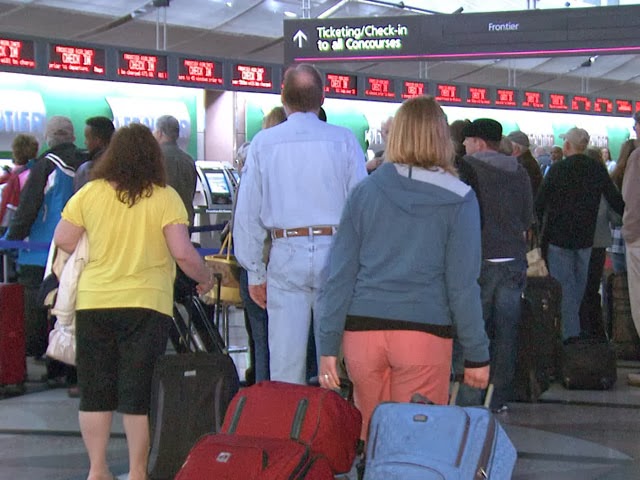 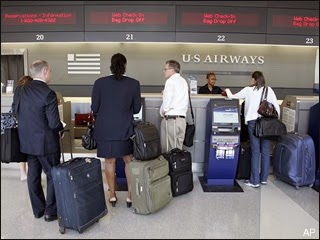 My impression was not that people are packing the same amount of stuff into larger and larger bags like a bubble, in the way that car trunks these days are like empty and unused cargo holds. There really does seem to be a lot of crap crammed in there. Anytime I leave with only a (stuffed) carry-on bag with no wheels, there's usually at least the cab driver or an airport worker who looks surprised: "Ah, traveling light!"

These days, traveling light makes you look like a nobody, almost like a hobo. "Don't you own anything?" Conspicuously hauling around a bigass suitcase gives onlookers the impression that you live in a house that has a home office and spacious closets, the entire contents of which you're dragging around on your trip. "I can't let travel get in the way of my super-busy work schedule," when most of that junk is unnecessary for whatever work you may or may not be doing. A good chunk is digital distractions for cocooners on vacation, not to mention the whole medicine cabinet's worth of cosmetics being dumped into women's suitcases.

By the way, how much more unwieldy are today's bags compared to yesterday's? Walmart's website has a luggage section, and their best-selling standard roller suitcase has dimensions 9" x 18" x 28". Searching for "1970s suitcase" at Etsy turned up this representative thing in avocado green, orange, and mustard yellow, with dimensions 6.5" x 13" x 20.5". So, today's suitcase takes up more than twice the volume of the older one (2.6 vs. 1 cubic feet), with each dimension being just under 40% larger.

I remember luggage getting big in the '90s, both the volume that each bag took up and how many bags people brought with them. My memory of the '80s here is hazy since I didn't take too many flights as a kid, but I remember them being more normal-sized. On the other hand, it could have been a case of the elite status-strivers changing first. "Garment bags" took off around that time, among the right people. And there must have been something of a trend toward hauling huge trunks, since Spaceballs and Planes, Trains, and Automobiles -- both from 1987 -- poke fun at it, and for opposite social classes (upper and lower, respectively).

Looking around pictures of airports from the '70s, I didn't find weighed-down passengers there either. Here's a typical shot of passengers at a train station: 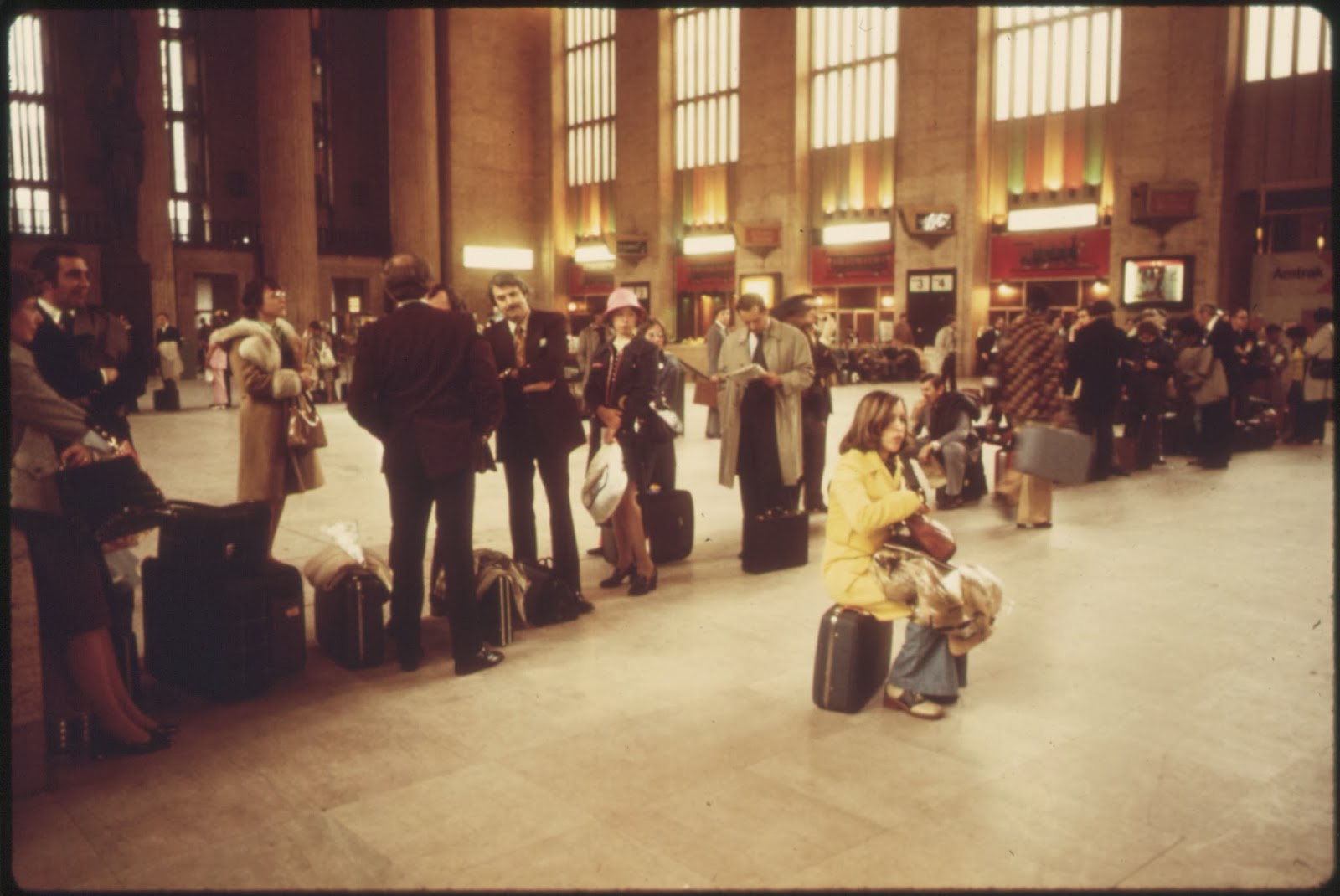 Notice how much smaller the suitcases were for everyone, whether male or female, young or old, and these are all middle or upper-middle class people. Also notice how women don't have two bags slung over their shoulder, in addition to dragging a coffin of a carry-on. Chicks back then were more of the mind that toting around so much freight turned you into a beast of burden, while today they believe that she who is crushed under the most bags, wins.

The '60s were like the '70s for the two main zeitgeist variables -- rising crime and falling inequality -- so it's not much of a surprise to see the same pattern of light travel back then as well: 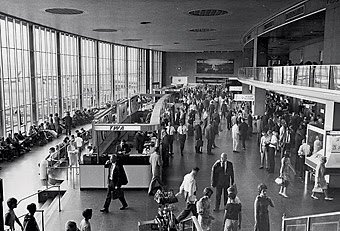 Now comes the critical point -- the '50s look like the '60s and '70s, and unlike the 21st century. This makes the "bloated luggage" thing a part of the status-striving and rising-inequality cycle, not the cocooning-and-crime cycle (in which case the '50s would look the opposite of the '70s, and similar to today). 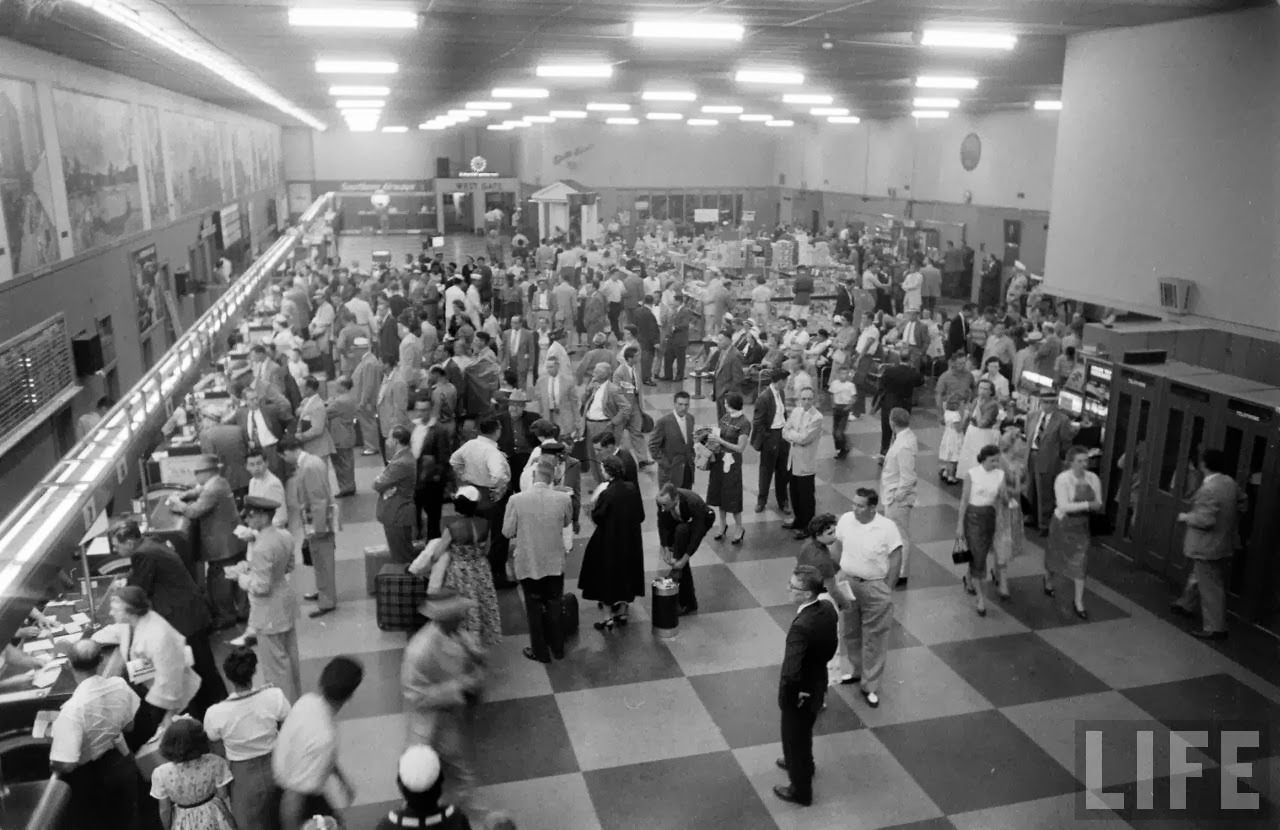 The folks from the Fifties don't look as animated and gregarious as they would in the '70s -- that's the cocooning vs. outgoing cycle -- but they aren't strutting around like they and their bigass luggage own the place, the way today's cocooners do. The opposite of striving for status is making do and reining it in, and folks back then didn't worry their heads off if they couldn't ship their entire office, closet, and medicine cabinet to their destination.

Also, if everyone packs a gigantic suitcase, then they ruin it for everyone -- all those things clanging around, getting in people's way, taking up limited cargo space, and weighing the vehicle down. If everyone pitches in to restrain themselves just a little, it makes a big difference. That's the core mindset of people in a making-do society. (Note: unrelated to economic well-being vs. recession, since this is the affluent Postwar period by now.)

So, who does look more like today's people? It must be those from the Gilded Age and Turn-of-the-Century. Piles of unwieldy trunks brings to mind scenes like this of a steamboat wharf circa 1900: 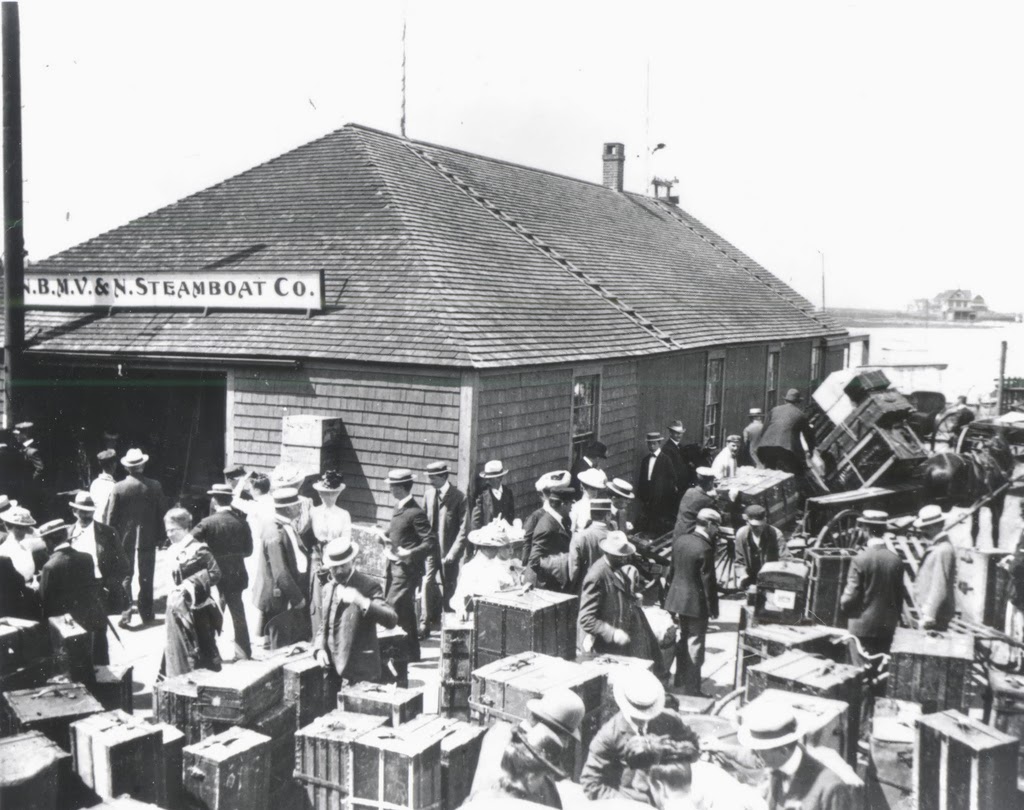 In fact, the article on trunks at Wikipedia covers mostly the mid-19th through the early 20th centuries, i.e. when status-striving and inequality were spiraling toward their peak around WWI. This period also saw the founding and rise to dominance of Louis Vuitton, a little company whose travel goods you may have been seeing more and more of over the past several decades.

Finding 19th-C. pictures of train passengers with their luggage was more difficult. A good fraction would not even have been "traveling" or "taking a trip" the way that today's airplane passengers are. Still, here's an idealization of the Chicago Railway Station around the 1860s. Those who are traveling have brought quite a load of stuff with them: 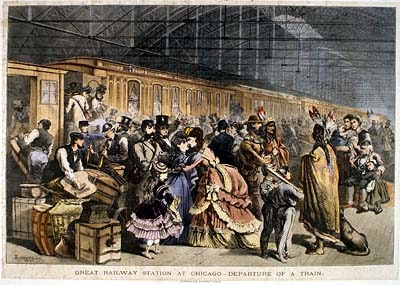 Here's a British satirical cartoon from the 1880s, showing a social atmosphere similar to today's. Everybody's strutting around like they own the place, just because they have an umbrella, walking stick,  newspaper of record, man-purse, quirky hat, conspicuous facial hair, etc. 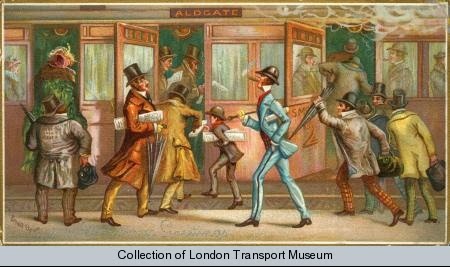 Like our time, the Victorian era was the worst of both worlds, with cocooning and status-striving interacting with each other. Mid-century cocooning was at least "keep to yourself" atomization, and the peak of status-striving in the early 1900s at least benefited from the gregarious and fun-loving spirit of the Ragtime and Jazz Age. During the Victorian and Millennial eras, however, alienation takes on a hostile melee character -- a war of all against all.

Perhaps that gives the big-bag-carriers another purpose -- preparing for the apocalypse, should it strike during their business trip. They certainly look like they're suited up for battle, the Victorian men with their makeshift cudgels and Millennial women with their blocky boots and hammer-throw bags.

Finally, here is a website with lots of pictures of airports and passengers in Hawaii over the 20th century. Browsing is a bit slow, having to click through several layers of specificity before you get to the actual pictures, then having to dig out and dig down all over again. But it's worth looking at since you're controlling for other variables by sticking to the same airports over time. Here's Kahului Airport on Maui, July 1986 (click for detail): 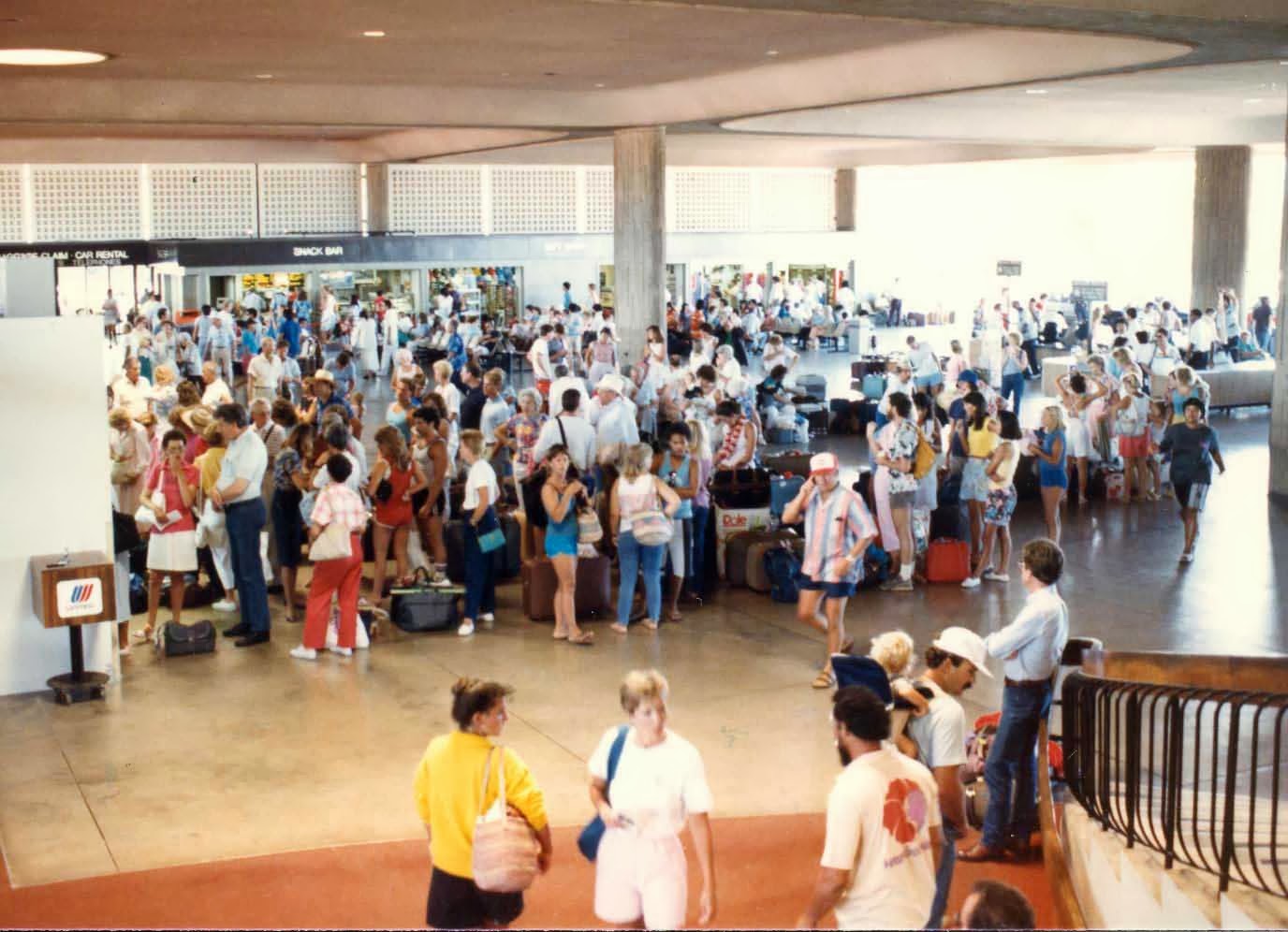 Luggage doesn't look too over-the-top just yet, either for size of bag or number of bags. It looks like most other scenes from the '80s, and could have been shot in a mall. Lots of old people, who you don't see too many of in airports anymore (it's mostly college kids, 20 and 30-something strivers, middle-aged businessmen, and nuclear families with young children). And being integrated into a social circle, rather than only having their spouse or nobody else to experience things with. Then there's the couple who aren't hiding their plans of coming to Maui for a tropical sex marathon (the chick in red booty shorts and the dude who looks like a Venice Beach cousin of John Oates). The fact that nobody around them is butting into their business, since everyone is enjoying their own lives. Children climbing all over the column bases, standing up on the lounge seats, and probably going for a ride on the baggage carousel. Somewhere a boombox blasting out "We're on safari to stayyy!"

The presence of the "snack bar" instead of Vino Volo. No Mexican food (and no Mexicans...). No obvious faggots creeping around. I think the outgoing, social-circle-oriented ways of the Eighties kept a pro-social lid on some of the status-striving and inequality trends that were underway, which exploded more during the '90s when people started cocooning again.