Film festivals and the growth of status striving

This suggests an influence from the growth in status striving and the resulting economic inequality over the past 30 to 35 years. On that hunch, I looked into the rise of this institution, using Wikipedia's list of film festivals, and grouped them by year established, using five-year periods whose first year ends in 0 or 5.

The graphs below show the number of newly established festivals per 5-year period (plotted by the mid-year of the period), and the cumulative total number of festivals in existence during the period. (Hardly any of them have been stopped, and I did not count one-time only festivals.) 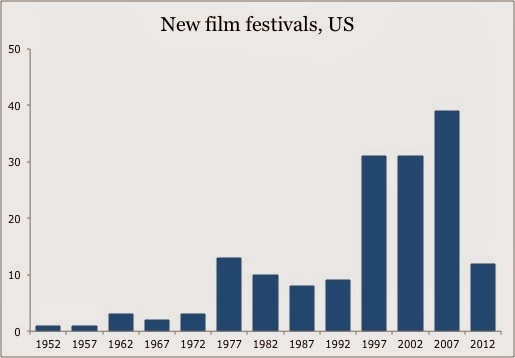 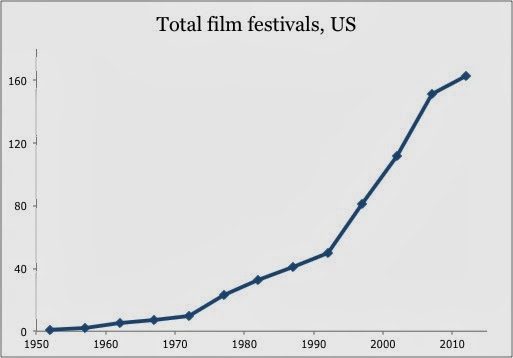 These patterns show up more dramatically in the second graph that shows the growth in the "population" of film festivals, which looks like logistic growth that is now running up against the ceiling set by the "carrying capacity."

So, the rise of the film festival matches up perfectly with the rise of status striving and inequality. How did it come to this?

Peter Turchin's model for the relationship between status striving and inequality (summarized here) shows that people first begin to compete for higher status, as opposed to the earlier norm of making do and reining it in. This leads to more and more trying to cram into the elite layers, creating an "over-production of elites." Greater competition at the elite level means that the winners win bigger, and the losers fall harder (higher stakes competition).

Although we like to think of The Arts as somehow protected from the forces of the market, filmmaking is a commercial industry like many others, where aspiring entrants pay for credentials, compete for jobs against everyone else in their line of work, and seek status and financial rewards by becoming a hit among their customer base.

See this NYT article on the soaring number of film school graduates, and that's only for recent years. Wikipedia's patchy list of film schools also suggests that their growth is mainly confined to the past 30 or so years.

What happens when the number of people seeking greater status through filmmaking begins to take off like a rocket? Suddenly there are way too many filmmakers and not enough venues for their work to be shown in. Competition for the fixed number of high-profile venues will get even nastier. But there's a way around that -- create more venues. Granted, they won't be as high-profile as the established ones, but some venue is better than no venue for aspiring elites.

(See also: the creation of ever more institutions of higher learning to absorb the swelling ranks of doctorates looking for a job publishing their research.)

However, there are apparently only so many new film festivals that can be created to open up a little more of the niche for filmmakers to pile into. Look again at those two graphs for the 2010s. Now that the limit is being reached, competition will get particularly nasty since there will be no lower tier of just-founded festivals to absorb those who couldn't get into any of the ones that have been around for awhile.

Film festivals also allow the host city or state to compete against other cities or states for prestige. Look through the descriptions of the festivals in the Wikipedia list, and notice how full they are of claims to bragging rights:

[F]irst and only festival exclusive to self-financed filmmakers.


You can't see it, but I'm making the "jerking off" gesture with my hand.

Filmmaking has been around for over 100 years, yet it's only during the period of increased status-striving that the number of film schools, film graduates, and film festivals has taken off. Worth keeping in mind when trying to make sense of the degree of desperate, petty, and competitive behavior in today's film world.