Eyeglass design over time: Open and transparent vs. narrow and opaque (pictures)

Looking over my aunt's 1963 high school yearbook, it struck me how similar the popular styles of eyeglasses are during the Millennial and mid-century periods.

It never hit me before because eyeglasses aren't one of those things that springs to mind when you think of "the look of the '80s." Even after poking around some pictures for reminders, they still don't click, the way you hear an iconic song you haven't heard in forever.

That's because eyeglasses from the '70s and '80s try not to be noticeable. Folks were more afraid of looking nerdy when the primary goal was being cool (part of being people-oriented). Now and during the '50s and early '60s, they enjoyed making a fashion statement out of something geeky (part of being thing-oriented).

Let's take a closer look at what specific features tend to go together during a given zeitgeist, and how that changes over time. There's a good variety of pictures and item measurements at this vintage eyeglass store on Etsy. Then there's this rich collection of old pictures of famous people wearing glasses.

Here's a representative sample of glasses for women, and then men, from the '50s and early '60s (click to enlarge):

Their most defining feature is the tiny height of the rims. Since the width is about the same for any two pairs, the smaller height gives these ones a narrow, almost squinty look. I get the feeling of being looked at suspiciously, as though I'm trying to get into a building and there's someone scrutinizing me through a slit in the door, asking me for the passwoid.

The frames are also fairly thick, particularly the temples (the arm parts). The colors are usually quite dark, though there's the odd beige or light grey pair. And the surface tends to be opaque and reflective. Thickness, darkness, and opaqueness all give them a more solid material presence -- more clearly a gadget that's been grafted onto your face.

Fans of these styles call them "architectural," but to me they seem more mask-like, especially combined with the narrow openings. And they're celebrating the thing-ness of glasses, rather than trying to make them blend organically with the human face.

People in cocooning periods are suspicious of each other on an interpersonal level (institutional trust is distinct, and related to the inequality cycle), and are more thing-oriented. The popular glasses above are just what you'd expect to have been popular during the mid-century.

Turning now to the '80s (glasses from the '70s look similar, but the traits are more pronounced further on):

Glasses were HUGE back then. Typically the height is at least 2", and I found some that were 2 3/8". The ones from the '50s and early '60s were generally at or under 1 1/2", and I found some that were as narrow as 1 1/8". So, glasses became about twice as wide open. It exaggerates the wide-eyed look of someone who already knows you, trusts you, and is devoting their full attention to you.

The frames are also thinner, only somewhat for women's glasses but more so for men's -- the temples that look like 2x4's whacking you upside the head are long gone. The colors are also lighter, either lighter shades of dark colors or new brighter colors like yellow, orange, and red (although they're not very saturated or loud). And the material looks less material -- translucent plastic for thicker frames, and wispy wires for metal frames.

Those features all work toward making the glasses blend quietly into the background rather than stand out or get in the way of the person's face.

The stereotype of '80s design and fashion is that everything was loud and attention-seeking, but here's a clear counter-example. Outgoing people-people don't want to be loud about something so unavoidably nerdy.

With the return toward cocooning as the mainstream form of social behavior, the set of features that was popular over 50 years ago has returned, sometimes quoting the original but usually not paying attention to history. Like-minded groups of people will independently develop similar cultures (in those domains where they are like-minded). Homosexuals are particularly drawn to the nerdy look, since as Peter Pans they don't care at all about being cool.

Finally, to help us remember a rather indistinct style (nothing wrong with that in this case), here are some real-life pictures of people from the late '70s through the early '90s, taken from the Bespectacled Birthday blog.

Christopher Reeve was meant to recall the nerdy Fifties office worker, yet they didn't give him narrow black glasses. That would have made Clark Kent look less trusting and keeping others at arm's length. The way-wide-open contemporary glasses give the character a more open and vulnerable look. It makes him easier to sympathize with, and it heightens the contrast with his more confident and in-charge alter ego.

Carl Sagan, perhaps the closest thing there was to the Nerd Laureate in the '80s, doesn't look very nerdy at all. Unlike the '60s and the 21st century, intellectuals didn't feel like they had something to prove by desperately sporting thick, conspicuous Intellectual Glasses. The wide openings place the rims away from the eyes, where they might distract you, and the rims and temples are so thin that you don't notice them. The large eye spaces also look more understanding than indiscriminately judgmental, always a worry for intellectuals.

That's Charlize Theron as a teenager. The temples are kind of thick, and the color is on the dark side, so they stand out a little bit. But because they're so wide open, they still look inviting rather than distancing. She looks like she'd be eager to talk to boys, not bothered by their presence. Isn't it strange how mature teenagers looked then, compared to 20-somethings today?

The one on the right is Heather Locklear, a rare example of a woman wearing super-thin frames. Not much of a fashion statement, although she has some golden and purple color to liven them up. It's probably the expression she's making for whatever TV show this is from, but she doesn't look as inviting as Charlize Theron. Still, she doesn't look stuck-up or high-maintenance. No-nonsense, maybe, but not catty or bitchy. Those women are long gone too, not just their glasses. 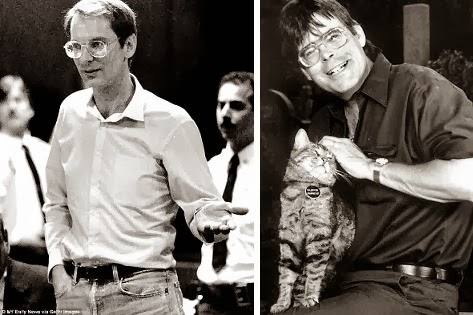 You often hear the '70s and '80s aviator style glasses on men being referred to as serial killer glasses, pedophile glasses, and so on. Here's subway vigilante Bernie Goetz and cat person Stephen King doing their best to prove stereotypes. I don't think the glasses themselves make them look weird. I think the association people make between these glasses and serial killers and pedophiles is that they were both a lot more common back then and are much rarer now.

Perhaps their creeped-out reaction is caused by the disconnect between the traits suggested by the glasses and the individuals wearing them. To me the squinty mask-like glasses look more voyeuristic.

Add eyeglasses to the list of things that used to be unpretentious but are now required to be conspicuous design objects. Time to buy a new old pair.