I stumbled on this gallery of pictures showing Gwen Stefani and Gavin Rosdale taking their kids for a little, er, stroll in the park: 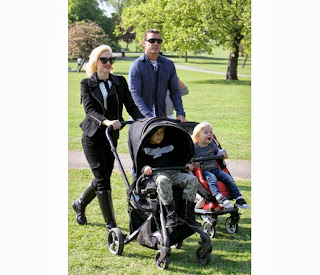 Notice anything weird? Those kids are too damn old to be pushed around in strollers. The girl is 5, and the boy is 7 -- yes, 7 years old and still being chauffeured in a stroller by his mommy. Odds that he'll start producing testosterone at age 12? Zero. Amount of compensation the parents will pay when this coddled wuss gets dumped into society, spewing brat pollution? Zilch. Level of shame felt by the father? Nada.

I'd seen this off and on within the past several years, but not too often since I try to avoid places colonized by helicopter parents and their spoiled spawn. But apparently this has been a thing for awhile. There's a tumblr going back to 2009 called Toobigforstroller, which shames the most egregious cases where the kid looks closer to 10 years old.

Warning: do not read this while already angry, but it does provide valuable insight into the rationalizing powers of today's OCD, self-absorbed mom-zilla. ("Why you probably need a stroller for your 'big kid' at Disney World".) TL;DR -- psycho-mom insists that her 6 y.o. boy ride around in a stroller on family trip, castrated husband caves in, then foam-padded kids feel like taking naps while at Disney World instead of running around having fun.

She complains about the need for strollers because her son gets tired easily -- gee, do ya think that might be because his legs never get any practice hitting the ground? Of course your kid will walk like a cripple if you bind his feet from birth through kindergarten. What a dingbat. And the worst part of all is that the little dork himself actually craves the security of the stroller even at 6 years old, like he never grew beyond his "bankie" phase. Totally fucking shameless.

Is this just another status contest among decadent blue staters? Unfortunately not. A quick look at Walmart's stroller selection online shows that the best-selling ones are mostly over $100. And it's not elites shopping at Walmart online, but more the middle class. Click on the "quick view," and you'll see that the most common weight and height tolerance is for kids up to 40 pounds and 40" tall, although quite a few go up to 50 pounds, and not nearly as many are meant for 30 pounds.

Consulting this handy chart of ideal weight and height measurements for growing children, that means that strollers today are made at least for 5 year-olds, but can easily be found to accommodate 7 year-olds, with 3 year-olds being the minimum they'll go.

It's not the '80s anymore, when strollers were made only for infants and some toddlers. I would've kicked my dad in the nuts if he had tried to 3-point-harness me into some over-sized cocoon for babies, and so would anybody else my age. Thankfully our parents let us grow up according to schedule back then, and didn't rob us of our basic human self-respect. Why then does our generation insist on depriving its children of the growth-encouraging upbringing that we had when we were little?

Bubble-wrapping your kid's body weakens its bones and muscles, and mind-binding turns his brain into mush. Look upon the end result of the Dr. Spock revival of the last 20-odd years. When "family values" becomes a shameless code for infantilization and breaking the family off from the community, it's time for a counter-revolution.

Related: an earlier post on letting big kids wear diapers, popular in both the mid-century and Millennial eras.