Lately I've noticed something uniquely juvenile about gay behavior from having to stand in line near them at fast food places. When they're discussing what they're going to order, they have a tendency to point at the menu. They do this also when telling the cashier what they want to order. And when they point, they hold their arm straight out, and for a lingering stretch of time.

I didn't know what to make of this at first, only that it was something that normal men and women hardly ever do. And if normal people point, they usually keep their arm bent at the elbow and hold their arm closer to their body, while pointing for a split-second. It's kind of an after-thought gesture for normal people. With queers, it's like they're seriously trying to direct your attention to whatever they're pointing straight at, as though you couldn't already tell.

Even more strangely, they're pointing at something that is close by, where eye direction and verbal description should be sufficient to signal the other person what the queer is attending to. Pointing is redundant. Adolescents and adults typically point when the object is way off in the distance, when determining exactly what bearing and distance can be tricky by just looking at the person's eyes. 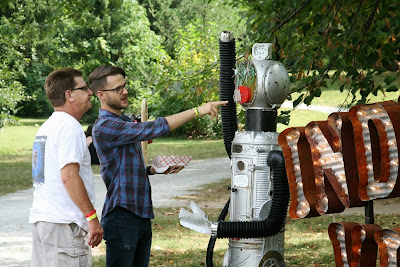 Why is this faggot pointing at something not even 3 feet away? And that he's staring directly at? And commenting on with language? ("Seriously, is this like the hottest set of robot lips you've ever seen or what?") Notice how extended his arm is; he's employing it to direct attention.

Then I remembered Michael Tomasello's work on human vs. other primate communication, where he argues that our communication began with gesture, including pointing. Our close primate relatives point, but they don't have language. And more relevant here, children begin pointing earlier than they have a decent grasp of language, around 1 year old. It's their way of communicating to others what the object of their attention or focus is, before they can do so with symbolic words. 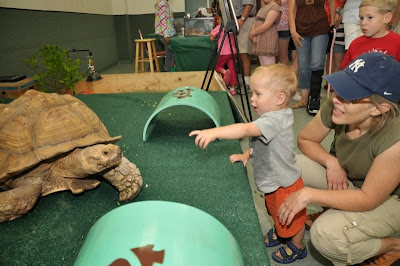 Children use eye direction to signal what they're interested in as early as infancy, like this kid is. Pointing for children is not a substitute for eye direction but for linguistic commentary. Your partner won't or can't always look at your eyes to see what you're looking at, so you'll need some other way to point it out. Actual pointing gets the job done, but is pretty crude -- again, think of trying to direct your partner's attention to an object situated some ways away, from pointing alone. It's much easier when you can use words -- "See the elk on the very left side of the herd? It looks like it's limping, so we should attack that one first." Using your arm and finger to point just won't achieve the same precision and resolution from far away. It takes time to acquire language, though, so children make do with pointing in the meantime.

Pointing is considered rude in so many cultures for a variety of reasons, but a key factor is that it just looks so damn immature. Teaching your kids "good manners" is partly to get them to respect local norms, and partly to get them to act like a grown-up would in any culture. Even by adolescence, normal people don't generally go around pointing at things. "Don't point -- say it instead."

Male preferential homosexuality reflects an arresting or at least a severe slowing down of psychological development in childhood, most obviously shown by the fact that faggots find all pussy repulsive. When exactly it strikes is not clear, though, and by looking over as many examples of their stuntedness as possible, we can narrow it down.

Since pointing emerges around 1 year old, it must strike after that age. This is confirmed by the lack of a season-of-birth effect. I don't know when pointing rapidly leaves the kid's repertoire of everyday communication, but no later than puberty. Children still rely heavily on pointing even at age 3 or 4, when their linguistic skills are still pretty weak -- at least, they don't command large enough of a vocabulary that could "point" to objects with higher resolution than arm-and-finger pointing.

This example is also valuable because it allows a direct test of the other main framework for viewing gay behavior -- namely, that they are feminized. Yet grown-up women don't point very much, let alone with their arm fully extended, when it's already perfectly clear from eye direction and language what they're attending to. On the other hand, pre-pubescent girls are no different from pre-pubescent boys in relying on pointing, especially at earlier stages such as the toddler years. Gays resemble small children of either sex more than they do male or female adolescents or adults.

Women are more neotenous than men, so for most examples these two frameworks have the same prediction. The handful of cases where they make different predictions, though, it always goes in favor of the infantilization model. The other, most important, glaringly obvious, and highly politically relevant case is marriage and raising a family -- gays have no interest in those things, particularly not in "being a mommy" to little babies. There they are more like immature children rather than adolescent or adult women (or men, who have their own form of wanting to marry and raise children).