I've been meaning to do "photo tour" posts of the everyday remnants of the New Wave age that can still be seen in your own neighborhood, if you have a curious eye.

During Christmas vacation of 2011-'12, I did a lot of exploring around the place where I grew up from middle school onward, Montgomery County, MD, in suburban DC. I wrote up a brief post to collect my thoughts and introduce the two topics I planned to go into more detail about -- beer and soda cans and bottles out in the woods, as signs of people having socialized there; and carvings in tree bark.

But it was all a bit too much to write up, and I didn't take any pictures. Plus I only come back here one or two times a year. Seems like I've got time to get around to it now. I headed off for about two or three hours today, and snapped about 50 pictures, mostly to capture the beverage containers. I'll be sure to trek around on further visits to detail the tree carvings.

That'll still take a little while to format the pictures and write up the post, though. So for now how about a more modest goal -- carvings on lamp posts. Usually it's tree bark or wet cement, but occasionally you do see metal landmarks carved into as well.

The location is Edwin W. Broome Middle School... well, that's what it was back in the day, anyway. Couldn't find quick data on its history, but I believe it started in the '60s as a new middle school to accommodate the Baby Boomers, and lasted through the early '80s, when the Baby Bust had become apparent and the region no longer needed an extra middle school. Members on Classmates.com seem to be somewhat from the '60s, but mostly the '70s and early '80s. 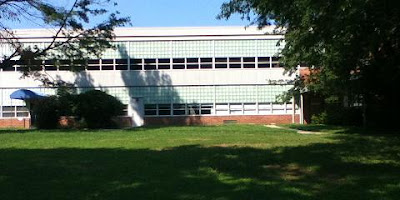 After that, it was known in local legends for being a loony bin, although "mental health clinic" is what it's referred to as online. Not sure if it was out-patient or what, but it had a shady reputation when I moved here in 1992. It used to house drug rehab programs as well.

And yet, although the building itself has gone through many stages of use, the surrounding area I'm pretty sure has always been open to the public -- the baseball fields and playground in the back, the tennis courts off to the side, the grassy areas on each side. So young people have always had the opportunity to visit this place, and I remember hanging out with friends there into the mid-'90s. When I visited last week, there was a father and teenage son playing each other at tennis.

But in general, it's rare to see young people there these days. That teenage guy was there with his dad, typical of a cocooning period (the social circle collapsing into the nuclear family only). The handful of other guys I saw passing through on their way to the woods, bike path, etc., were over 40. It's strange to see that playground go totally unused, and especially since school's out for summer. 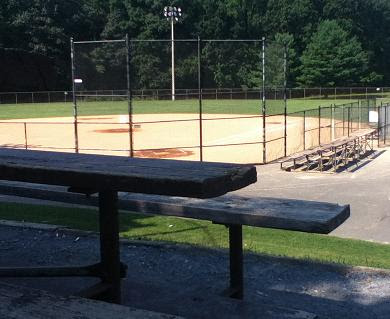 One sign that the site has been abandoned as a hang-out spot for young people is the lack of graffiti from the '90s or later. True, it could just mean that the behavior patterns changed while the attendance stayed the same. But I remember that place pretty well, and over the '90s, it became less and less frequented by young people. In the mid-'90s, often me and my group of friends would be the only ones there for the entire evening (back when kids were still out in unsupervised public places after dark).

It all comes down to attachment to place, which makes you feel like hanging out there more, as well as leaving your mark behind somehow. If the mark is an extension of you, then you will physically remain connected to that place, even if you move away or die.

And it doesn't have to be anything deep -- that might actually kill the mood of informality, familiarity, and closeness that you want for your favorite places. Quite a few carvings that I've seen sound more like smartass yearbook messages (back when kids still signed each other's yearbooks).

Here are some pictures of carvings I found on the lamp posts both in back of the building, close to the bleachers, as well as some off along the side driveway. Nothing on the posts way out from the building, since nobody would see them. Click to enlarge.

The first reads, Tracey Frye was here "81". Tracey, you are so busted, and thank you for recording the date for us archaeologists from the future. Then there's, Robin + Frak... I think they meant Frank, but were enjoying themselves too much to pay attention to proper spelling. Next, Vicky N Rusty, followed at the end by, Paul + Kathy / True Love, inside of a heart shape.

Even though only Tracey dated her carving, the names alone date the others -- when was the last time you met young people named Robin, Frank, Vicky, Rusty, Paul, or Kathy? (Today it would be Katie or Kate.) Those are middle schoolers' names from the '70s.

Jerry likes Kim, that looks familiar enough. Again, when was the last teenage Jerry you met? Kathy Ten (?) + Nobody -- that's self-aware enough to make me think it's from the early-to-mid 1990s. But that's assuming Kathy wrote it herself. If it's someone else poking fun at her, or putting her down, maybe it's from the '80s after all.

Kathy G. Did not want to come out side -- is that the same Kathy as the one nearby? Or was Kathy so common of a name that they had to distinguish two Kathys (Kathies?) by giving one a last initial? I like the mysterious context to so many of these carvings. Were Kathy G.'s friends giving their wet blanket friend a hard time in writing, or was Kathy G. registering her own displeasure? It's definitely a girl's handwriting, but it could be female friends of hers. I know it's of no great consequence, but it's one of those messages that can just make you wonder. Not some off-putting, lame sticker that says OBEY or "____ Eating Meat" under a STOP sign.

Red Hot -- another enigma. Are they gesturing toward someone else, or are they letting us know about the carver themselves? And do they mean really good-looking, or rarin' to go, hot and bothered? I'm leaning toward the latter -- people weren't that hung up on looks back then (not like the era of "Sexy and I Know It"). The handwriting looks unisex to me. The frank sexuality makes it seem like a guy wrote it, but I could also see it coming from a boy-crazy bad girl. Not necessarily a slutty / man-eater type either, perhaps just a tease who wanted to scandalize the boys for fun.

It's so bizarre to think that these are messages from middle schoolers. "True Love" and "Red Hot" -- kids grew up pretty fast in the '70s and '80s. Today not even adolescents or 20-somethings would dare to carve stuff like that onto a lamp post, probably because they don't feel those things very much anymore. Red hot isn't just generic horniness, one of those itches you feel like scratching just to get it over with. Young people still feel that today. But something that's red hot isn't going to cool down for awhile... is it? So evocative for just two little words.

Tracey Frye must be around 45 years old today. I wonder what markers of place from their youth the Millennials will have to look at when they're 45?