Ever since people began to abandon public places and spend more and more time at home, the attention to interior design and decoration has taken off like a rocket.

There was that whole obsession with IKEA that began in the '90s era of feeling richer (the Clinton years), when we all felt the urge to purge our embarrassingly cheesy '80s furniture. It picked up even more steam during the mid-2000s housing bubble, when everyone felt like it would only add to the already guaranteed soaring value of their home. And yet it's still going strong, right through the recession. The whole Western world has become obsessed with interior decoration.

How can you look at a room and tell that its owners had the interior decoration bug? There are too many signs of conscious, deliberate choices, and cross-coordinated choices (will these picture frames echo or clash with the drawer pulls?). Like, "Hey, look over here! A decorator chose meee to play in the cast of characters here. Good choice, wouldn't you agree?"

None of it looks haphazard, or organically grown over time. Aside from the deliberateness of the whole look, it also looks like you could have bought the entire room yesterday and had professionals install it today -- a room in a box, a carbon copy of the showroom where you purchased every one of the items. That's another thing -- the items all look like they could have been bought in the same store (and just may have been), further emphasizing how artificial and effortful it looks, rather than organic and intuitively thrown together.

Here are a few views of the ideal style of the early 21st century: 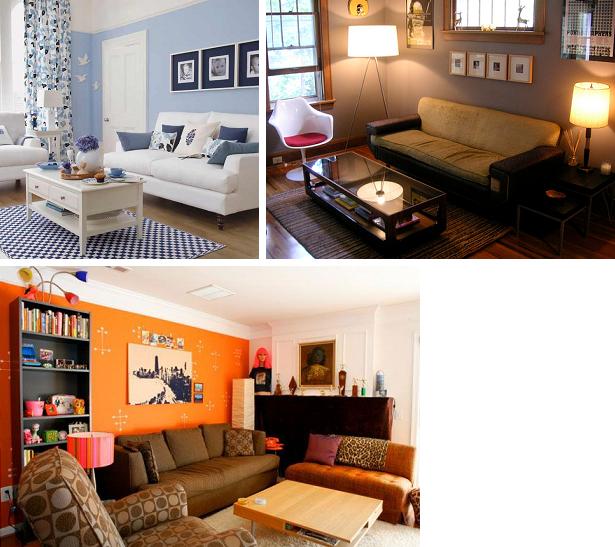 Look at how many shades of blue are cross-coordinating with each other in the top-left picture, and the heavy use of different shades of orange and brown in the bottom picture. The top-right one is using texture more, but the effect is the same -- so many cross-coordinated woody or grainy textures. So many items in a single room that fit together so precisely could never have occurred by accident. We're very aware of how deliberately designed the room is.

However, in the not too distant past, living rooms have more of that "What were we thinking?" kind of look. But that's precisely the point -- we didn't give that much thought to interior decoration back then, because we spent so much more time outside the home. As long as it had a little homey charm, and even if it would look cheesy to a designer, it was fine by us.

Have a look at how uncoordinated rooms used to look in the 1980s: 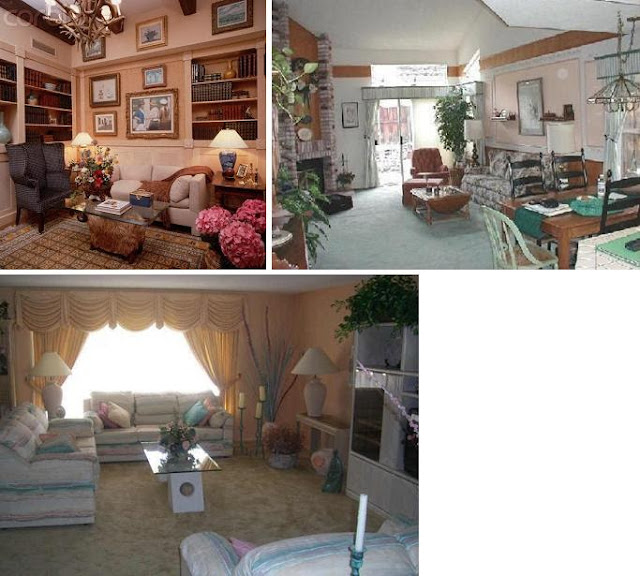 I know, it's totally a low blow to put that pastel-o-rama room in there, but that was a pretty common look. The upper-right room doesn't look too offensive, though -- could have been used for a teen comedy movie. And the top-left one is looking understated, sophisticated, and most of all organic and lived-in. It looks like it took awhile for the owners to acquire all of the different items. Is that a sheep holding up the coffee table? LOL. The Eighties style could get so irreverent -- not at all like the on-the-nose irony or camp of the past 20 years. It could have been the location for a dinner party scene in Hannah and Her Sisters or When Harry Met Sally.

What they all share is a lack of a matchy-matchy feel. In the top two, a few colors, textures, and shapes are repeated -- but that could have been by chance (and probably was). The bottom one does look a bit more like the gay decorator with AIDS next door had more of a say, still, even there you have to examine it more closely to see the repeated colors. They don't pop out like the 21st century ones do. The sofas are clearly copies of the same design, but it doesn't look like you slaved away thinking how to match them with other things in the room.

Summing up: not exactly what you'd find in a museum of interior design, which would be more designer-centric.

Nah, for the heavily designed look of a cocooning culture, you have to go back to the mid-century. Indeed, during our own age of cocooning, reviving the mid-century modern style has become a national mania. Here's a look: 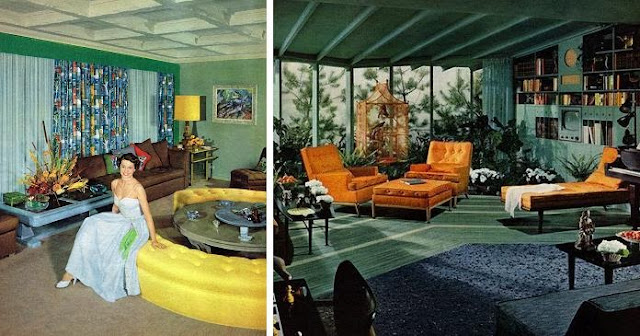 These are obviously decorator rooms, judging from the stand-out signs of a "color scheme" that pervades the place. The furniture all has that signature style of the legs being tapered and super-smooth in texture, increasing your awareness of the non-accidental nature of how these items wound up in this space. They were chosen to have a common "signature style."

Also, like the Millennial-era pictures, there's a heavy use of display objects meant to tell the viewer something about the owner's personality or interests, or to just look impressive. There aren't as many objects on display in the '80s rooms, aside from things you could find in anyone's home, like lamps and flowers. We expect to see flower vases, lamps, and potted plants. But when we see statuettes and figurines, we're meant to ask why they made that choice? And even the expected things like vases are given unusual shapes that call attention to themselves. "Hey, look at me! I'm not your ordinary flower vase -- I'm designed."

And of course, before the cocooning mid-century was the outgoing Jazz Age. Everything looked more elegant at that time, but compared to the mid-century, it still looks so undesigned. The left picture is from the '20s, and the right one from the early '30s:

Each of the furniture pieces looks different, not obviously from a single designer or single store. Some colors match each other, but it could be by chance. It's not an overpowering color scheme. And the display objects are pretty soft-spoken -- vases, lamps, or plates that aren't meant to blab about your uniquely awesome individuality. They have that same homey, charming, lived-in look of the '80s rooms. It doesn't look like the owners lost sleep over what would be put in the room and how they'd be arranged.

They could easily have been acquired at different times from different sources, the only requirement being that they basically get along with the existing ecosystem -- not that they have to loudly conform to the other elements and strengthen the single unified style.

So did people just not care about design during the '20s and the '80s? Far from it -- they simply directed that concern outside the nuclear family's house. In those periods, the home was not our sanctuary from the outside world, which was way more exciting and stimulating than your dull living room. If you weren't going to lock yourself in your house all day long, why obsess over it trying to meet all of your aesthetic dietary needs?

When you're more outgoing, you'd better worry more about non-domestic architecture -- public buildings, commercial areas, outdoor entertainment places like parks or golf courses. As spiffy as the mid-century and Millennial-era domestic interiors look, everything else architectural was soul-draining in those periods. The spiritless big box skyscraper, the strip shopping center, the drive-in or drive-thru fast food joint, the abandonment of parks -- those staples of mid-century and Millennial architecture more than cancel out the design-y look of their homes.

The Roaring Twenties and the Go-Go Eighties had Art Deco and a Deco-inspired revival, the elaborate department store and the bazaar-with-oasis shopping mall, and fast food restaurants that were not garish or covered in advertising on the outside (visible from the next street over). All of those enriching places more than made up for the domestic interiors that don't look like much effort went into making them look nice for the owners and visitors.

Something important to keep in mind when you hear the triumphalist accounts of how epic our homes look today compared to the '80s, and how fierce our toothbrush holders look nowadays. True, they don't have that nondescript look of the '80s or '20s, but no one would have minded back then because they had a rewarding social life outside of the home.

The dramatic rise of all these designer wall paints, designer nesting tables, and designer wastebaskets is merely a reflection of how deprived our lives have become of a sense of belonging outside of the nuclear family. Having given that up, we're struggling to create amusement and pride of place within our homes -- all while the look and feel of places outside the home only become more and more bleak, depressing, and alienating.

Man is not a solitary animal, and at least outside of Sicily is not meant only to "belong" to a nuclear or extended family, but a broader community of genetically unrelated fellows. It can be no surprise, then, that there's such a pervasive mood of anxiety, malaise, and atomization in those periods that try to create a sense of place only within the home and not across the broader community.