Prom pictures, from indoors and intimate to outdoors and distant

I've been going through stacks of old pictures at home, and noticed that most of the ones from the '40s and '50s seem to be taken outside, while the ones from the '70s and '80s are set in just about every imaginable location, including tons of indoor shots. Also, the people in the mid-century pictures look more purposely staged and posing for the camera, while the pictures from the good old days look more informal, candid, and fly-on-the-wall, as though the people being photographed weren't self-conscious or aware of the camera.

And true to form, pictures from the past 20 years, especially from the 21st century, appear to have returned to the mid-century pattern. There aren't lots of candid, informal indoor snapshots. Everybody wants to go outside to take pictures these days, and it's all more formal and choreographed.

That's a bit too much to visually compress into a single post, though, so I thought I'd restrict things to a single occasion, to "control for" other possible differences. And an occasion where pictures could be shot indoors or out -- not opening presents on Christmas, or summer vacation at the beach.

I also want to look mostly at young people, since they're the group that changes the most drastically when the culture goes through a major change in direction -- for example, during the 1960s (more spirited and outgoing) or during the 1990s (more sarcastic and withdrawn). And something with an abundance of pictures on the internet -- prom.

For those who weren't teenagers in the past 20 years, or haven't had teenage children, here's a view of what prom pictures invariably look like. They're so uniformly shot outdoors and in large groups that you'll only find one or two that are not, within the whole 1000 or however many results that a Google Image Search returns for "prom 2010." The first two are from the mid-late-1990s, and the bottom two from the 21st century. Click any to enlarge.

Now, these shots can be found from somewhat older pictures, too, which confirms what I said earlier about the snapshots coming from just about any imaginable location and combination of people. Here are some outdoor prom pics from across the 1980s. Overall they look more comfortable, cheerful, and lost-in-the-moment rather than the above shots, where there's more of an air of what-are-we-supposed-to-do, um-I-guess-this-will-be-kinda-cool, and stretch-your-face-muscles. The '80s teens look more like socially savvy young adults, while the Millennial-era teens look more kiddie, like children playing dress-up.

Notice how normal the black couples look, by the way (back when white and black people still made pop music for each other). 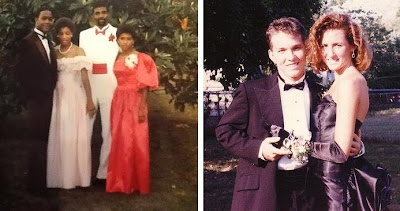 Here's where the pictures take on more of that bygone-era feeling. I've seen a handful of these indoor shots from Millennials on Facebook, but they're very rare. And it's not just prom that's moved outdoors and has that forced/posed look -- graduation parties are another good example. As with the outdoor shots, the '80s teenagers below look more at ease in a real-life social setting, more happy to be hanging out with one another, and more eager for what the night holds in store for them. And not only the higher probability that back then they'd be getting physical. It was one of those intense events that continues to bond the social group together long after the party's over.

These are the kinds of pictures that make you proud as parents that your kids are growing up into normal, healthy adults, even as they hold onto that sweet and adorable quality of youth.

The Millennial-era teenagers look awkward and in need of parental supervision and direction to get through the event. You may not feel something as sorry as pity, but definitely disappointment. You can just feel how anti-climactic the night is going to be for them. But hey, raising stunted out-of-place children is worth it to make sure that their peers don't exert any influence that would twist them out of shape, after all your years of tireless sculpting. If that means they can't act on their own well into young adulthood, hey, that's their problem, not yours.

So what's up with pictures moving outdoors, when not too long ago people were comfortable taking them indoors? I think it has to do with the new feeling toward the home as a sanctuary or refuge in an age of cocooning. People don't hang out in public much anymore, and spend most of their time locked indoors with their nuclear family or potential seed of a nuclear family (like cohabiting with a partner). It's the one place where you can set your mind somewhat at ease (I stress "somewhat," since there's still all of these new OCD maintenance routines for the home).

In that environment, someone snapping your picture feels like an invasion of your privacy. Before, people were so in-touch with one another that taking an indoor picture didn't feel like, "Omigosh, my privacy -- violated!" Now everyone's so anxious about letting their guard down and letting others get close, and here you are catching them off-guard. And you're not even an outside intruder -- you're probably a nuclear family member or close friend. But these days, even people who are supposedly close are not supposed to let it all hang out around each other. Even among "friends," spontaneity is, like, actually kind of creepy...

Moving the pictures outside relieves that anxiety about being caught with your pants down. It's still on your private property -- not in an unsupervised public place -- but not where you tend to be more yourself. Going outside raises your alert level somewhat, so you'll avoid that natural look that you're afraid of giving off indoors. Posing, putting on your best kabuki face, allows you to go through the formality of taking pictures "for memory's sake," while not actually opening up in order to make them memorable. People expect you to look more formal and posed outdoors, so they can't blame you for acting the way you deeply want to. You'll have plausible deniability about being a socially awkward weirdo.

OK, now that that's out of the way, we only have a few more things to get out of the way -- the limo ride, the dancing-apart, etc. -- before we can call it a night and wake up refreshed for a return to the comfort of complaining on Facebook and playing texting games.