The good old days in one picture 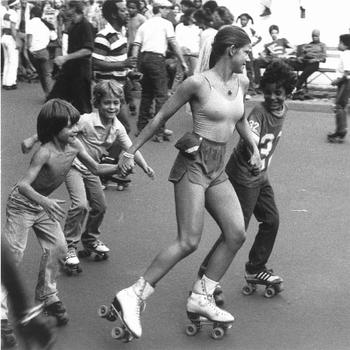 Let me count the ways...

- Tons of people outside in a public place.

- Kid allowed to hang out in public with no shirt on.

- Chick with no bra on, and it's neither shameful nor attention-whoring because nobody notices (including her).

- Sports / athletics part of everyday life, and they're fun rather than a chore.

- Three apparently unrelated children, and not a parent in sight.

- Teenage girl mock-flirting with pre-adolescent boys to help them grow to feel comfortable around girls.

- Whites and blacks hanging out in the same space, not a black ghetto / SWPL refuge configuration. Mostly due to whites having more backbone and keeping real-life blacks under closer watch, rather than abandon their space altogether.

- Clothes that fit the body, not Victorian trash-bags.

- No slobs or obese people, and no overly fussy or anorexic people either.