Chatting with servers but not your friends or fellow patrons

Although people are much less socially inclined than in the good old days, especially toward strangers in public spaces, I've noticed that they are still fairly willing to chit-chat with their servers in a food and drink place.

"Still" might be the wrong word -- I don't recall people chatting with food servers that much in the '80s, whether from memory or in TV or movies. They were just sort of there to do a job, and if anything they seem to have been treated more carelessly. Some smartass tells you he wants you to "hold the chicken" between your knees, some bratty kid dumps an ice cream scoop into your apron pocket when your back is turned, some fat bald jerk shouts that the sign says 100% guaranteed "you moron," so you shout back that if you don't shut up, I'm gonna kick 100% of your ass!

So maybe it's more of a replacement of more formal interactions for the more informal interactions of before. You relate to your friends, your bf/gf or husband/wife, and your fellow patrons on a more informal level -- you all have roughly equal power or influence among each other, and you can take another person's perspective because some of the time you're playing the role that they currently are in the group dynamics.

Interacting with a server has more restricted, and more clearly defined boundaries around what's permissible. Less uncertainty, less risk, less having to figure stuff out and negotiate the changing conditions of real life. Also, you can't take the other person's perspective because you're probably not a food server who gets paid to interact with customers yourself. You never play each other's role, or any different role.

There's something of a guest-host feel to the interaction because food and drink is involved, and that's a prototypical scenario for hosting and being hosted. I don't notice people chit-chatting with the employees at an electronics store, a big box store, or really anywhere other than a place that serves food -- not supermarkets either, since they don't prepare you what you're buying. But even in the food service places, the fact that you're paying the servers and they're giving you a receipt to show that the accounts have been settled, kind of deflates the spirit of generosity and gratitude that fills a true guest-host interaction.

Sure, groups of people who show up together may talk a little bit, but it's typically superficial remarks and brief responses that don't build toward a sustained conversation where everyone's taking turns. And if they're born after 1984, they all wall themselves off with their devices, perhaps texting each other or leaving messages on each other's Facebook, rather than turn their faces toward each other, make eye contact, and speak and listen. Omigosh, like awkward, like creepy.

And forget about strangers approaching each other to shoot the bull for awhile -- a superficial remark, a dead-end response, maybe some nervous or forced laughter, and then back to total isolation. I've noticed that even compared to several years ago, strangers in public spaces are less likely to make a request that one of them watch the other's stuff while they go to the bathroom, smoke a cigarette, yak on their phone outside, etc. However minimal, that was still a form of reaching out to someone else for support, the other accepting, the first one acknowledging the other's helpfulness, and the other acknowledging the first one's gratitude. Again, particularly rare if they're from the Millennial generation.

Wait a minute -- public spaces that look abandoned, customers who are disconnected from each other, but where a food/drink server is at least showing them some attention and thought... I swear I've seen this all before. Oh yeah: 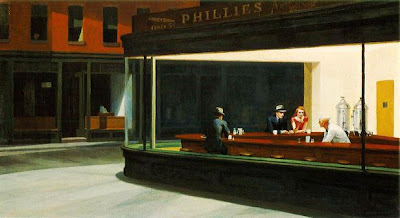 In the mid-century, there was the soda jerk; in the Millennial era, it's the barista. Then it was the car hop girl; today it's the Hooters girl.

Just like us, and unlike people from the '60s through the '80s, they were so risk-averse and socially-emotionally avoidant that the more scripted interactions with food servers felt more comfortable than interacting with their peers. The soda jerk and car hop girl became icons of the time, well loved by the general public. We'll have the same fond memories of the Hooters girl and the barista of our time.

But that shouldn't distract us from the fact that their popularity reflects a deeply rooted social anxiety and lack of trust of the average, everyday person, who is after all a stranger. And the absence of similarly iconic servers from the '60s, '70s, or '80s should remind us of how much our fondness for those times derives from the connectedness and sense of belonging across the entire neighborhood, community, and even nation, obviating the need for crutch-like relationships with food and drink servers.