Starting in the early 1990s, the ascendant helicopter parent army pushed for the destruction of good old fashioned playgrounds with dangerous stuff that built up our bodies and our character. Like, we're still here, aren't we? A few years ago, the typical playground had become so infantilized that the swings look like suspended car safety seats, and there are pointless safety warning stickers plastered all over the equipment.

Just when you thought it couldn't get any worse, my brother sent me this picture of a new species of playground sign: 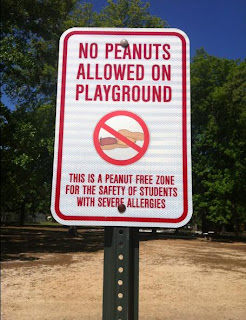 Fuck all of these OCD parents and their weak, stunted children too

Can't say I'm shocked, but it's still depressing how far today's parents are willing to go to ruin their children's childhoods and prevent any social group from forming among little kids. How could it when they have no unsupervised public spaces where they could gather, interact, and learn how to treat each other through experience?

Family interactions are fake for character building because of Hamilton's Rule: parents and even siblings will tolerate all kinds of shit that genetic strangers would not. Children need to interact with one another in face-to-face situations to prepare them for adult social relations -- which are not supervised and micro-managed. Sheltering your children from peers stunts their psychological growth just as strapping them in bed stunts their skeletal and muscular growth.

This phony anti-peanut crusade seems to be the application of the anti-smoking bans to the world of children. We all ate plenty of meals in restaurants where there were smoking and non-smoking sections, and like, we're still here, aren't we? Now you can't even smoke within five blocks of any building with more than three people in it. The abrasive and anti-social attitude of the anti-smoking crusade shows that it was clearly not motivated by health concerns, like ones related to the flu, asbestos, etc. Folks with the flu are not banned from leaving their homes, are they? And we know for sure that they're harmful, unlike the questionable / bogus nature of second-hand smoke pollution.

Well, children don't smoke, so how are helicopter parents going to use that same tactic to fragment the community among the under-12-year-olds? It didn't have to be peanuts, since any other food with a flimsy story about the risk posed to everyone or even a small minority would have worked. But the way it's unfolded, the peanut allergy became the wedge.

And let's be clear about what the purpose of the anti-smoking and anti-peanut signs are -- not to lessen the traces of cigarette smoke or peanuts, which is an instrumental or utilitarian goal. It is to poison the informal and easy-going atmosphere of public spaces, to cripple their ability to serve as places where groups of people can come closer together when they might otherwise not ever run into each other. Sober, formal, authoritarian signs like these ruin your mood right away, even if you weren't thinking of smoking or eating peanuts in the first place.

It puts you in that mindset of, "Oh great, this is one of those tightass places where everyone's being tracked by security cameras..." and you're prevented from enjoying a carefree state of mind. With that higher degree of self-monitoring, you can't forget yourself and join in the communal spirit and activities of a public space.

I think one of the first clear signs of the zeitgeist changing direction will be when normal people stop respecting all of these omnipresent, everyday authoritarian bullshit rules and regulations. Not necessarily in a self-conscious, middle-finger-to-The-Man sort of way -- just tuning them out altogether. Walking through grass instead of always adhering to the paved pathways, chilling out while sitting on a fence or rail or hood of a car, going out with no shirt on in warm weather, and all those other normal things that people used to do before we became so rule-bound.