There's no way I'm going to see another terrible re-make of an old horror movie, AKA random people you can't care about get tortured.

But it's worth taking a brief look at the characterization, trailer, and poster to appreciate how different horror movies have become since the '90s. You used to be able to relate to the victims, and their troubles gave a little stimulation to the empathy lobe of your brain. Now you don't relate to them, so you only feel like a voyeur, as though they were examples of some other species.

The original isn't that great, though it's at least watchable. The set-up is pretty simple -- a small group of fun-loving college students head off to a cabin in the woods for a wild weekend, stumble upon a book that unleashes some kind of demonic possession spirit, and have to work as a team against it, with the normal ones having to turn against their unfortunately possessed friends.

The key here is that the characters are portrayed in a likable fashion before they come under attack. Otherwise, who cares what happens to them, no matter how gory? You can learn about people getting tortured all over the world if you want, but unless you already perceive them as part of your in-group, you don't respond emotionally.

Young people must be shown to be driven by an impulse toward socializing and making friends, dating and mating, and rambunctiousness. That tells us that they're normal and healthy adolescents, that they're wholesome. Youngsters who are asocial, sexless, and boring tell us that they're defective in some way, so a normal audience can't relate to them as easily, plus we feel like it's not so great of a loss if they perish.

That doesn't mean that in the good old days, it was only the popular crowd who were the targets of the killer's attacks and our empathy. That was back when there were a lot more "troubled teenagers," and social misfits often showed up in slasher flicks during the '80s, most notably in A Nightmare on Elm Street 3: Dream Warriors, which is set in a hospital for troubled teens. Even though they're misfits, they're shown to have a basic interest in forming relationships, though going about it somewhat ineptly, and turning to desperate measures in frustration. Still, that gives us the impression that their drive toward socializing and courtship are normal and intact.

Fast-forward to 2013, where the Evil Dead re-make is set up by a 20-something girl who's retreating to the woods as part of a de-tox effort, with her friends tagging along for support. Well, we've already left normal-and-healthy behind, so it'll have to rely on the troubled teen trope to make us care.

Yet when was the last time you heard anyone described as a troubled teenager? They're too risk-averse to get into much trouble these days, so this character is not an instantly recognizable type -- like, "Oh, she's one of those troubled teenagers..." She's just some random chick with an opiate addiction. If they'd shown her struggling under the pressure of getting into a good school, and turning to Adderall and alcohol, it might have been somewhat believable. But an opiate addiction in the 21st century? Um, random.

Without a believable set-up, we cannot buy into the more fantastic events that follow. But energetic co-eds set off for a wild weekend, high school camp counselors pair off to get it on in the woods -- that's believable.

How else can we distinguish believable from unbelievable characters? Let's turn to the trailers and have a look at the characters' facial expressions. Here is a very gory trailer for the re-make, and here is the original. In the re-make, when the possessed girl warns her friend, she has her eyes wide open, eyebrows reaching up to her hairline, and mouth agape. It couldn't look more exaggerated and fake. It's like some 4 year-old child self-consciously struggling to make a shocked face when they're not truly shocked, but egocentrically trying to manipulate another child or their parent into believing they are. She comes off like the boy who cried "wolf."

Note to half-children -- you can't show a shocked expression for more than a moment, after that your body (including your face) launches into action to deal with the threat. In the original movie, it never occurred to the actors to plaster a shocked look on their faces throughout their performances. Rather, when the girl is getting raped out in the woods, she's pressing her eyes shut and making a crying/disgusted expression with her mouth. It looks like she's truly in pain, and because she's convinced us earlier that she's a normal healthy person, we feel bad when we see it.

Sadly, the kabuki masks in the re-make are part of a much broader trend over the past 20 years toward self-aware exaggeration in facial expressions, a topic I brought up here and elaborated on a bit more here. It prevents us from sympathizing with the person.

Aside from the trailer, what about the movie poster that's supposed to hook the audience's attention? Here are the original and re-make: 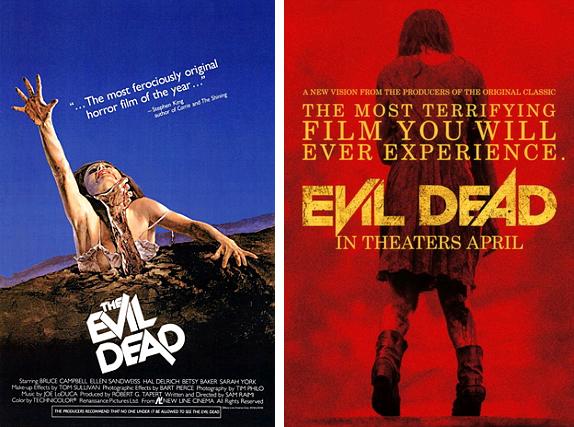 We can't even see the girl's face in the re-make, because her back is turned to us and her head is turned down. Without being able to see it, we know that her eyes are downcast as well, like she's trying to hide it from us. Well, OK then, you dorky awkward wallflower -- don't expect us to give a shit about you when you get demonically possessed and mutilated by your own friends. A self-conscious "don't look at me" pose is just as emotionally distancing as the overly exaggerated kabuki mask.

The poster for the original shows a girl whose mouth isn't agape like on so many horror posters these days. Her lips are open and pulled downward, and her rows of teeth are fairly close together, while her eyelids are squinting and inner eyebrows pinched upward, all creating a clear crying expression. The hand reaching out is something you won't see these days either, since people are so creeped out and/or embarrassed by asking others for help. Or the other hand scratching the earth to resist being dragged down. It shows a normal and healthy will to stay alive, whatever it takes.

Now all you see in horror posters (or the movies themselves) are disconnected individuals, either resigning themselves with a "don't look at me" face, or shrieking out in futility. Again we see their defective will to stay alive in the face of death. Not stoic either, just collapsing in on themselves. But you have to understand that for people in the Millennial era, atomization feels less creepy than reaching out, and self-collapse doesn't risk open failure like making an effort does.

Will our culture ever pull its way out of this swamp of sadistic voyeurism and fatalism? Well, sure: it did before, after the previous nadir during the mid-century, shown most nakedly in the widespread horror / crime comic books of the time. See here and here for a reminder. Horror movies of the mid-century weren't any better at stimulating our empathy, even if they were less gory than comic books. The characters are bland, unlikable, unbelievable, or fake, so again, who cares what nasty things happen to them?

Starting in the '60s with Psycho, and then Rosemary's Baby and Night of the Living Dead, we could connect with the characters for a change. That would continue toward a peak in the late '70s and '80s -- Halloween, Alien, The Thing, A Nightmare on Elm Street, Child's Play, Twin Peaks. Some of those have better character development and acting than the others, but they all convince us that we're watching normal and healthy people like us -- or troubled young people who we could have turned out like, if we hadn't been so fortunate. Not some out-of-the-blue intrusion, some fluke that is of no larger or lasting significance to us.

The key driver behind these social-cultural changes is the trend in the crime rate. When the world's getting more dangerous, we're better at portraying that convincingly on screen, and better at empathizing in the theater. Rising crime is a force that affects us all, and binds us together as we try to help each other through dangerous times. Before the '60s-'80s crime wave, there was the 1900 - early '30s crime wave, and sure enough that was another era of well-made horror movies.

Falling crime makes us feel safer and less in need of others' support, as well as putting the threat of predatory death so far off into the land of make-believe that we can't portray it or resonate with it very well.