Heterosexuality declining among young women since 1992 or '93

Perhaps one reason that young females today are particularly loud cheerleaders of the movement to normalize gay deviance is that more and more of them have either said "what the hell?" to a same-sex adventure themselves, or know another girl who has. As far as I can tell, so far this possibility hasn't been explored very much, at least compared to the clearer trend of them having more gay male friends and acquaintances.

The General Social Survey asks three questions about the sex of the respondent's sex partners, allowing us to see what their objective behavior has been like, rather than how they subjectively perceive their sexual orientation. One asks what sex your partners over the last year have been (SEXSEX), what sex they've been over the past five years (SEXSEX5), and the number of female partners you've had since turning 18 (NUMWOMEN). The heterosexual responses to these questions are "exclusively male" for the first two and "0" for the third. I restricted the respondents to 18-29 year-old females, since the shift in support for queers seems to be most pronounced among young people.

Here is the percent of young women who gave the heterosexual response for each of the three questions, from the late '80s / early '90s through 2010: 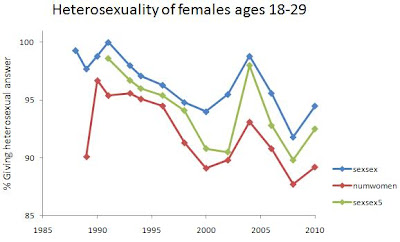 The only anomalous point is the unusually low value for "numwomen" in 1989, which doesn't agree with the high values in 1988 and '89 for "sexsex". Aside from that, though, all three questions point in the same direction. They were still high through 1991, and no later than 1993 they started falling steadily (there was no survey in 1992, so that could have been the pivotal year). Against that trend, there was a brief detour away from bisexuality and lesbianism from 2002 through 2006. Ironically, that was the peak of the girl-on-girl attention-whoring culture, which as I pointed out earlier was just a goofy stunt to get maximal attention from guys while giving them nothing in return.

It's not as though the average girl is no longer straight, but still the percent has fallen from nearly 100% to around 90%, depending on the question. That may not sound huge, but to make it easier to get on a gut level, let's pretend that how heterosexual a young woman is was like how tall someone is, a kind of "height." Just like some are taller or shorter, some are more or less heterosexual. Female sexuality is more fluid, especially during the more experimental stages of life. (This is not true for men, who are either gay, straight, or lying. And indeed none of the three questions show a decline in heterosexuality among young males.)

Taking the young women of the late '80s / early '90s to be the standard, it's as though their counterparts in 2008 were 2, 2.8, or even 3.2 inches "shorter" on average, depending on the question. Think about that -- the height of the average young woman falling 3 inches (or 1 standard deviation) in just 18 years, not even a full human generation. That is a change big enough to affect large swaths of the culture.

For one thing, even straight girls now are about 10 times more likely than 20 years ago to know a girl who's fooled around with bi or homosexuality. So, suddenly the topic of queer rights strikes a lot closer to their narrow social circles, making it a political topic that they will actually invest in.

There is a separate question of what caused this decline of female heterosexuality in the first place, remembering that there is no similar upward trend for gayness in young males. I'll write that up more in another post that will include a look at more sources of data, but briefly I think it's just one effect of the falling-crime times pattern of male and female social worlds separating more from each other.

When boys and girls don't interact much with each other, the males will not resort to homosexuality because the instinct against it is so great that it takes an environment like prison, English boarding schools, the ancient Greek army, etc., to nudge them in a gay-for-a-day direction. Since female sexuality is more fluid and facultative, though, I can see how they'd respond to their self-imposed exile from boyland by experimenting more with their fellow girls.

The previous era of falling crime, 1934 to 1958, witnessed Kinsey's report Sexual Behavior in the Human Female, which had estimates of around 10% of 20-35 year-old women being bi or homosexual. That's a rather high estimate, but it was published in 1953, a time when girls had stopped being so boy-crazy and mostly hung around other girls. Girls during periods of rising crime, like the Jazz Age or the age of rock 'n' roll, are too busy chasing after boys for dates to bother even thinking about girls, let alone acting on it. So many cute boys to flirt with at the mall, and so little time. But again, I'll look at this sometime later.