Over the past two years I've detailed lots of not-coincidental pairs of changes in the violence level on the one hand and some other social or cultural variable on the other. So far the link between them has always been easy to understand.

For example, rising-crime times cause people to believe in, or at least focus on, the supernatural, one clear signal of which is the proliferation of religious cults in those times. In falling-crime times, this interest evaporates and cults fade out. The link is simple: when people perceive a more dangerous world, the order of the universe appears to be breaking down, so they lift their eyes up to see what might be going on in places above the mundane level that could explain what the hell seems to be going wrong here on the ground. Then when they perceive a safer and safer world, they figure that order is being restored somehow or other, so we can return our attention back to more sublunary matters.

This time, though, I don't know quite what to make of link between the two. The hunch came from thinking about how different girls' names sound today compared to when I was little, and not just my female peers but also the older high school girls who babysat me or my friends, plus female characters in TV shows or movies. It seemed like back then they were more likely to have a name ending in the long "ee" vowel. Shelly, a girl my age who my mom made me play with when I was 3. Heidi, my babysitter in kindergarten (my best friend's was named Susie). Nancy, the lead character in A Nightmare on Elm Street. Kelly, the sweet babe from Saved by the Bell. Shirley, my first girlfriend in 6th grade. And that sound seemed more absent from the names of today's younger girls, aside from a handful of trendy names all rhyming with "--aley" or "--iley" such as Haley, Bailey, Caylee, etc., and Miley, Riley, Kylie, etc.

By now, I've seen so many changes fit with changes in the violence rate that I'll pursue any hunch if there's even a semi-plausible link. Here it is that names with the long "ee" vowel sound cute. Cross-linguistically, vowels that are produced high and front in the mouth, such as "ee," tend to occur in words relating to tiny size, light force, brief duration, and diminutive status in general. In English, we have a long "ee" diminutive suffix: kitty, doggie, blankie, tummy, and so on. Having looked over the cycles in how much make-up girls wear during rising or falling-crime times, I bought the idea that cuter names would be given to baby girls in those times too.

The Social Security Administration's website has data on what the most popular boys' and girls' names were in some year, including what percent of newborns had a certain name. From this I constructed an index of how prevalent it was for newborn girls to have a name ending in the long "ee" vowel, which I explain in a little more detail in a footnote for those interested. [1] 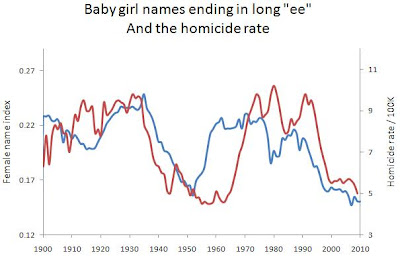 Given how noisy the estimates of these two variables are in any given year, let alone for 110 years, that is an amazingly tight fit. Think of how much else you might have thought would influence naming fashions -- and of course a lot of people say that fashions don't reflect social changes at all. The correlation between the two variables across years is +0.504 (2-tailed p = 1.94 x 10^-8). The only time where they don't move together is roughly 1900-1915.

By mid-century, it looks like the cuteness of baby girl names actually predicts the homicide rate later on -- talk about a cheap way to forecast the near-term crime rate! Sticking just to the most recent crime wave, from 1960 to 2009, the homicide rate in a given year could be predicted from the name index 4 years earlier. That correlation is +0.577 (2-tailed p = 1.00 x 10^-5). Look how even the brief down-tick in the homicide rate in the early 1980s was foreshadowed by a drop in the name index during the mid-'70s, and that both rose afterwards for roughly 10 years before dropping very fast during the '90s, and then more shallowly during the 2000s. Both also show a sharp rise at first, and then a plateau.

The only other variable I know that is a leading indicator of the crime rate is the level of trust that people have in one another. That rose through the '70s and '80s, peaking around 1989 -- 3 years before the peak in the homicide rate in 1992. So the cuteness of baby girls' names more likely reflects current trust levels, which are closely related to violence levels but precede them by roughly 5 years. This name index, then, could serve as a proxy for trust levels even for times when we don't have good survey data.

Perhaps in more trusting times, parents expect their daughters to grow up in a more chummy peer environment, so they worry less about giving them a cutesy name that would be more of a liability in a more adversarial world. Imagine a girl introducing herself with a sweet-sounding name when most people around her look on sweetness with irony, sarcasm, or disgust.

If I were her parents, I'd probably give her a more suit-of-armor kind of name too. Not necessarily a tough-sounding name -- although there has been a rise in androgynous girl names in the past 20 years (Taylor, Jordan, MacKenzie, etc.) -- but at least one that sounded better-than-you or more-special-than-you, like Sophiabella. That would keep other kids from trying to make fun of her name.

So add that to the list of ways that higher-trust times are more enjoyable -- girls wearing prettier names. And although there is a cycle here, the long "ee" names in one wave generally aren't dug up from the previous wave. They still sound fresh. Betty, Peggy, Dorothy, Beverly, and Ruby did not make it from the Jazz Age peak into the next peak during the age of rock 'n' roll. Likewise, in the next wave we probably won't meet too many girls named Amy, Becky, Katie, Stacy, or Kimberly (my favorite -- it also has a pair of warm, maternal bilabial consonants, "mb"). The next wave will bring with it a totally new form of wild popular music, distinct from jazz and rock, and another crop of girls with pleasantly novel "ee"-ending names.

[1] I went through the top 200 names, found those that ended in the long "ee" vowel, and added up the fraction of newborn girls with such names. However, there are differences over time in what fraction of girls are represented by top 200 names -- sometimes girls' names are concentrated among fewer choices, and sometimes they're more spread out among a variety of choices. So by looking at the top whatever-number, you're not necessarily looking at the same fraction of girls overall.

To correct this, I standardized by dividing by the fraction of girls represented in the top 1000 names. Why not stick with the top 200? I already had calculated the top 1000 figure, and they take awhile to do. Its only purpose is to give a hint of how concentrated vs. diversified individual names are among the choices, so it'll work as well as if I did it for the top 200.