The effect of AIDS realism on containment of gay deviance

By now most straight people have either heard, read, or just noticed with their lying eyes that AIDS never was a problem for heterosexuals, and continues to be a non-issue today.

That is a totally different view from the mid-'80s through the early-mid-'90s, when it was new and frightening. Could you catch it from a public toilet seat? What about if some kid with AIDS went to your school and you shook his hand? And what if...? I still recall my schoolmates in fourth grade singing "Let's Talk About Sex" by Salt N Pepa, which tried to shock the straight listeners into taking safe sex seriously -- you don't want to be claimed by the AIDS epidemic, do you?

Over this same time, straight people have come to view AIDS as not a real threat to gays, and have therefore abandoned any duty to contain gay deviance ("oh puh-leeeease, what's the worst that could happen?"). This is just one of the many ways in which people have lost their former awareness of how messed up gay life is.

That seems strange -- shouldn't they have come to see AIDS as a uniquely gay threat? I think what's going on is that straight people are using themselves as a reference point or baseline to which they compare the danger to gays, and react accordingly to contain gay sexual behavior, give it the go-ahead, or shrug in puzzlement.

Here is a table of how straights react based on their beliefs along two key dimensions: 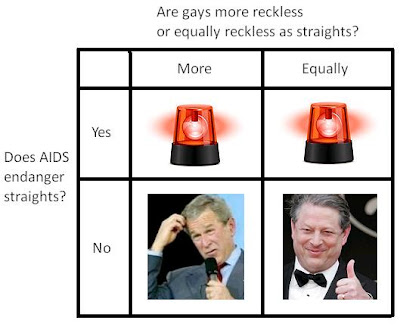 If straights perceive AIDS as a danger to themselves, it doesn't matter whether they think gays are just like us or are more deviant -- AIDS is at least as much of a danger to them, perhaps more. In either case, at least the same level of alarm will be sounded about gay behavior as about straight behavior (and recall that was quite an alarm in the '80s). Obviously the impulse to contain gays will be even greater if they are seen as even more deviant than straights, but that's more a difference of degree.

However, if straights perceive AIDS as not a problem for themselves, and also believe that gays are just like us, then they give the green light to gays to act however they want. If it's not wrecking us, why would it wreck them?

Even if they believe gays are more deviant, they don't have a good intuitive feel for just how much more deviant they are -- a little, somewhat, a lot, a whole big lot? All they sense is that AIDS is a bigger threat to gays than to us. But is that threat enough to warrant a policy of containment? Some will say it is and others that it isn't, squabbling over how dangerous is sufficiently dangerous.

Over the past 15-20 years, our society has moved farther down and to the right in that table. Still, it seems like the main cause of our turning a blind eye to gay self-destruction, and waving it on eagerly from the sidelines, was our more sanguine view of the threat that AIDS posed to us. When we ourselves were freaked out about it, that provided a powerful mental "anchor" that automatically made us see gay behavior as worrisome (if they're just like us) or downright frightening (if they're more deviant).

Unfortunately this suggests that the surest way to get back on track of keeping gays from destroying themselves and polluting the broader society is to send a good scare into straights about AIDS or some other STD, and that arguing over whether gays are just like us or are deviants might not prove very effective. Note that the panic among straights would not have to result from lying about the prevalence of AIDS among straights -- you can imagine two fairly similar groups reading over the same prevalence estimates, and one freaking out while the other shrugged its shoulders. It's the perception of the objective data that matters.

Since straight people have turned off the alarm as they figured out what the prevalence truly was among us, I doubt that we could be scared back to where we were 20-25 years ago. Sadly, I think it will take something like the successor to AIDS to break out among gays, just as the original was new and terrifying even to straights in the 1980s and early '90s. And who knows, we may have more than an unfounded fear the next time around -- no two pathogens are alike, so maybe AIDS v.2.0 really can be caught from public toilet seats or bathroom door handles.