Two major waves in the history of junk mail

Here is the prevalence of the term "junk mail" in the NYT, starting with its first occurrence in 1954 (data are in 5-year blocks, plotted at the mid-year): 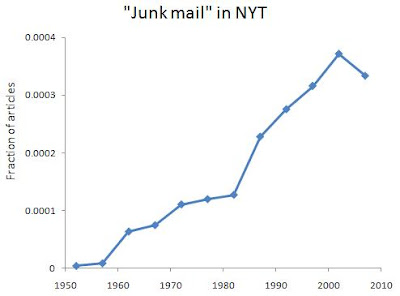 However, the second half of the '80s sees another surge upward that began to plateau somewhere around 2000. This is another case of "obviously not due to the internet," as it preceded the internet and email, and the post-internet world shows a shallower rise in usage of the term. Either senders of junk mail started ramping up the volume, which the post office likes because it increases their revenue, or despite a mild change in volume people just got more fed up with it.

I have no recollection of what junk mail was like during the first half of the '80s, and was not even alive before then, so I have no idea what distinguishes these two phases. Anyone out there care to clue us in to what the first wave of the junk mail deluge was like?