The rise of the gay friend and its consequences

Yesterday at '80s night I saw even more disgusting evidence of the displacement of guys from a girl's social circle and gays moving in to take their place. As female attitudes toward guys came to be dominated by suspicion, fear, unease, and so on, they began to cut normal males out of their world and allow in only the non-guyish guys -- namely gays.

When this trend began in the '90s, the gay friend at first took over only the most female-typical roles of the guy he was replacing, such as talking about her relationship problems over the phone or accompanying her on shopping trips. Gradually he took over roles that were increasingly closer to the heart of a guy-girl friendship, such as going out for coffee and lunch during the day, or drinks and night-clubbing at night.

Over the past few years, I've seen the gay friends not just tagging along with the girls when they go out at night, but being more or less the only ones they dance with. Last night I saw them intrude even further onto the turf of the straight guy -- by being the only one that she would grind on (i.e. give a standing lapdance to), and the one who would pick her up and hold her around the waist while she put her legs around his sides.

Really, what's next? -- girls who only feel comfortable fucking when it's with their gay friend?

It's worth looking at the origins and spread of this phenomenon, as most Millennials will find it hard to believe that there was a time in the recent past when gays were completely off a girl's radar, and a good deal of pre-Millennials have already forgotten what they've lived through, as is typical. First, the prevalence of the term "gay friends" in the newspaper of record: 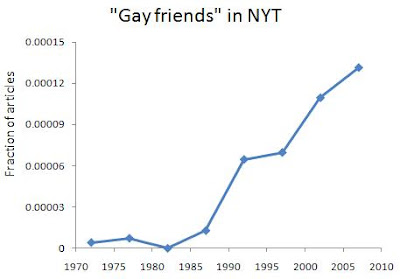 The points are of 5-year blocks and plotted at the middle year of the block, so that the 2000-2004 period is shown as a point at 2002. There are no instances of this term before the 1970s, except for some cases in the '40s and earlier when "gay" still meant "cheery" instead of "homosexual." I used the plural instead of the singular because this gave a larger sample size.

This picture confirms my earlier hunch based on the appearance of the gay friend in TV and movies. Here is a recent NYT article about some loathsome new TV show that will focus exclusively on the now-mainstream girl-gay friendship, compared to earlier shows where there may have been a single girl-gay friendship, and that may not have been very central to the plot. The reporter is correct to point out that fag hags are no longer drawn only from the dregs, but now from a wide range of the fair sex.

Another article covers several surveys on Americans' attitudes and interactions with gays, which have changed quite a bit even during the 2000s: from 2003 to 2010, "the proportion of people who reported having a gay friend or relative rose 10 percentage points." Since gays are not shooting up that fast in the overall population, this is not due to people having more gay relatives but rather searching out or welcoming in gay friends.

As I mentioned earlier, the gay friend trend is part of a larger shift toward extreme sex segregation after the peak of the violence rate in 1992, and in its broad contours mirrors the sex segregation of the 1950s, '40s, and even the later '30s, which were another period of falling crime. Boys and girls want to play with each other more when the violence level swings upward, as during the '60s through the '80s, as well as the first three decades of the 20th C., peaking during the Roaring Twenties.

Since male desire to hang around females is fairly stable, the real change shows up in female preferences. During dangerous times, they want to hang out more with males for a variety of reasons. They are in greater need of protectors and avengers, and female friends aren't going to do any good there (and neither are gays in general). Also, they tend to be more boy-crazy and promiscuous, for reasons described elsewhere, and having more guys in your social circle makes that easier to act on.

Moreover, when times are more dangerous, you expect to live a shorter life, so you feel the impulse to grow up earlier rather than live life as a perpetual toddler. I remember first being seduced into an adventure of "I'll show you mine if you show me yours" by a girl who was hiding under a tablecloth-protected workspace during naptime at a daycare center -- when I was only 3 or 4. Ah, the early-mid-'80s... sure won't find a toddler girl planning that out today.

I still vividly recall my first school dance in the fall of 1992, when I was 11 or perhaps 12. Sure at first there was the typical picture of "girls along this wall and boys along the opposite wall" of the cafeteria, but it didn't last more than 10 or 15 minutes. Someone broke out and everyone else followed. We were barely entering puberty then, yet we were behaving more wildly than the infantilized college students I observe and interact with every week at '80s night. In particular, the girls back then were horny as billy goats and wanted so bad to dance up-close with boys.

Periodically the adult monitors waded through the sea of sweaty sixth-grade bodies to break us apart and insist that we maintain a certain distance with our dance partner. Today those busybody killjoys would be out of work, since most girls don't want to dance at all, let alone face to face and belly to belly, preferring instead to jiggle their shit in order to steal the spotlight without having to touch or be touched by boys, a la Fergie. (Grinding does not count, as I've explained in detail elsewhere. There's no connection or tendency to stay together; rather it's fleeting and prone to the girl just up and walking away without even making eye-contact.)

We were also more rebellious back then -- even when we were split up, we snapped right back together when the old lady had moved on. Compare that to the girl in the club today who's dancing with a boy, gets pulled away by her cockblocking friends, and then just goes along with the abduction rather than tell them to get a life of their own as she goes back to her partner.

And greater sex segregation is just one piece of the larger picture of girls becoming more boring during falling-crime times, namely as a result of not hanging around the more wild and exciting sex -- guys. Fag hags try to rationalize their snore-inducing friendships with gays by imagining that these relationships are transgressive and liberating. Back on planet Earth, the gay friend is the ultimate desexualized male, and hence poses no threat to her safe cocoon at all. He plays the role that the eunuch used to play with harem girls, although his lack of interest in girls was forced upon him then, and these days the female's cloistering is of her own choice. He has a faint protector role, nothing on the order of a knight who has to defend the castle, and spends most of the time in utterly asexual activities and conversation. Today's girls who like boys who like boys are no more shackle-breaking or square-shocking than a slave girl imprisoned under the guard of a ball-less watchman.

Shoot, I saw more carnivalesque behavior among the elementary school girls who joined in with the boys for a game of duck-duck-goose or state tag. like, omigod, you mean i have to touch a boy to tag him out, and he might touch me to tag me out???!! well... i guess so -- i mean, it does look FUN! On the bright side, once that late-'80s level of violence in the wider society returns, we'll see the rebirth of cool chicks as they start ditching their gay pet/friend and hanging out with the boys again.