Level of conformity across cultures, shown by car colors

Here are regional data from DuPont's 2010 Global Automotive Popularity Report that show what percent of new cars sold in 2010 had this or that paint color. Across the world, neutrals are far in the lead, a far cry from the dangerous-times explosion of color in general and including cars.

At any rate, we can see how conformist the car-buyers in a region are by looking at how much variation there is among car colors -- if all cars belong to one color, that's total conformity, while if each car had its own unique color, that's total doing-your-own-thingity. There are lots of ways to calculate variation in qualitative data, but to keep things simple, I'm just going to use the percent of all cars that fall into the four most popular colors -- the greater this percent is, the more the most popular colors show up everywhere, while the smaller this percent is, the more the non-mainstream colors enjoy success. Here's the ranking from least to most conformist: 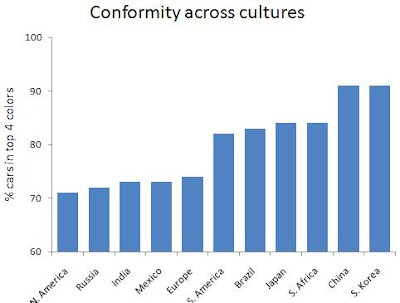 No surprise that the birthplace of rock 'n' roll shows the lowest level of conformity in car colors, although other European groups are only slightly more conformist. Since the data are from new cars sold in 2010, I'm guessing most of the Mexican data reflect the white elite of that country. Rounding out the lowest stratum of conformity, India is not a surprise either: the "look at how hot and cool I am" enthusiasm is familiar. It's the opposite of the "we must maintain group harmony by looking the same" ethic, which we see in full force in the upper-stratum countries of China and South Korea. Japan is also more conformist than Europe, but is substantially less so than the other Northeast Asian countries, a pattern that shows up in all areas of culture. (This may be due to the very late adoption of sedentary farming in Japan, where nomadic foraging and fishing remained popular for thousands of years longer. See below on the farmer vs. herder divide.)

Joining Japan in the middle stratum are South America, Brazil, and South Africa. Again I assume those car-buyers are mostly of European ancestry, so it's odd that they're so much more conformist than their counterparts in North America and Europe -- even more so than those in Mexico. Maybe there's something about being in such racially diverse places that makes Europeans want to look highly similar, in order to maintain cohesion in the face of non-European ethnic groups that are close to or more than a majority. That would still leave Mexico unexplained, though, since the Europeans there are a minority also.

In any case, there seems to be a larger pattern of farmer vs. herder differences. Farmers in general are not very showy, whereas pastoralists, especially the nomadic ones, are much more colorful. For females in nomadic pastoralist groups, the only form of wealth that they tend to carry and pass on is gaudy jewelry, since the herds are held by and transferred to men. Men in such groups tend to be showy and boastful, since having a reputation as a shrinking violet would doom you to predation in a society where thieves can easily chase away or run off with all that belongs to you. Farmers care more about land, seeds to plant, and defensive structures to keep out trespassers, and have little need to be gregarious and show off.

It's too bad there isn't regional data for car colors in the Middle East, where a large share of the people descend from nomadic pastoralists. Still, Europe has always had a healthy mix of farmers and herders, whereas Northeast Asia has been nearly only farmers. Another great test case would be sub-Saharan Africans, but new cars are too expensive for most of them, so that data probably won't be collected for a long while. When it does, there will still probably be the sharp divide between farmers and herders that has existed there. This would control for lots of other factors too, unlike the Europeans vs. Northeast Asians comparison.